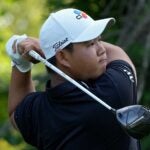 Joohyung Kim hits his tee shot on Friday on the 13th hole at Sedgefield Country Club.

A leader who started his tournament with an eight. A contender who was 10 shots worse than the day before. And bubble boys. Friday’s play at the Wyndham Championship at Sedgefield Country Club in Greensboro, N.C., had a little bit of everything. Let’s take a look.

Joohyung Kim is tied for the lead

Joohyung Kim is 13-under par over his past 35 holes. Of course, you know well that they play 36 over two rounds on the PGA Tour, and that’s where it gets interesting.

On the par-4 1st on Thursday, Kim marked himself down for a quadruple-bogey eight.

“I mean just, I mean, all I did was laugh. I didn’t really take it — it’s just one bad hole,” he said Friday. “Told myself, you know what, I’ve got plenty of holes to bring it back if I just play well on my next 35 holes, and that’s exactly what I did. I played better than I thought I was going to, so it’s a bonus. Yeah, just definitely happy to finish the round today and just kind of laid back knowing I’ve got the weekend to play.”

That he does, and then some. Kim, after making seven birdies and no bogeys on Thursday after his quad, recorded seven birdies and a bogey on Friday, shot a six-under 64, and he held a share of a one-stroke lead, at nine-under, with Brandon Wu and Ryan Moore when darkness stopped the second round.

Did Kim have any flashbacks to the first hole on Friday?

“Yeah, I went in the bunker again and I was like, well, here we go, just don’t make a quad,” he said. “I was like, let’s just get this on the fairway, and I did. I had a good number, I hit a great shot to two feet, and I was like, you know what, this is strokes gained right here, four shots better than yesterday, so most improved on hole No. 1.”

38 players are within five shots of the lead

Thirty-eight players were no worse than five shots out of the lead when play was suspended. Among them were Sungjae Im, Russell Henley and John Huh, who were one shot out of the lead; and Brian Stuard, Anirban Lahiri and Davis Riley, who were two strokes back.

Notably, Huh, the first-round leader, was 10 shots worse than he was on Thursday — he shot a 61 during the first round and a 71 on Friday.

The Wyndham also is the last event of the Tour’s regular season, with the top 125 players in the season-long FedEx Cup standings moving on to the start of next week’s playoffs. So who’s on the bubble?

Notably, the live tracker does not include any of the players who have left for LIV Golf and are suspended. It is unclear how the standings will officially look after Sunday’s play, though Golf Digest is reporting that the playoffs will include 125 Tour players.

Also to be determined is the fate of the three LIV players — Talor Gooch, Hudson Swafford and Matt Jones — who have petitioned a court to issue a temporary restraining order allowing their participation in the playoffs. That case will be heard on Tuesday.

The Tour’s live tracker can be found here.