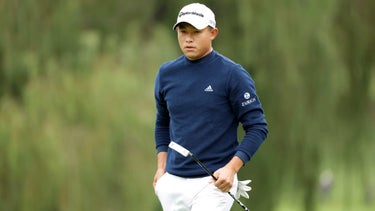 Viktor Hovland is looking for a three-peat in Mexico. Is he likely to do it? Here’s who our expert likes to have a big week.

Viktor Hovland is looking for a three-peat in Mexico. Is he likely to do it? Here’s who our expert likes to have a big week.

How do you say ‘three-peat’ in Norwegian?

Oslo’s own Viktor Hovland has the chance to pull off a rarity of golf rarities this week as the PGA Tour drops south of the border for the World Wide Technology Championship at Mayakoba. The 25-year-old is looking to go back-to-back-to-back in the event, a triple punch that has not been seen on Tour since 2011, when Steve Stricker captured his third consecutive at the John Deere.

Such dominance is elusive at the elite level, and Hovland will have his hands full with the likes of Collin Morikawa, Tony Finau and Scottie Scheffler on an El Camaleón Course that places a premium on accuracy off the tee.

Andy Lack puts a premium on accuracy, too. GOLF.com’s expert prognosticator is with us once again, offering his four top picks in four different categories: a winner, a top-10, a top-40 and a matchup. You can see his plays below, along with Lack’s account of the reasoning behind them.

And because we like to see where public opinion is leaning, we’re also providing data from Chirp.com, a free-to-play mobile platform (and Golf.com affiliate) that gives fans all kinds of ways to engage in the action. Here’s to a profitable week.

Due to his elite driving accuracy and ability to generate scoring opportunities inside 150 yards, Morikawa was the first name that popped into my head when I was researching El Camaleón. With narrow driving corridors, and ten par 4s that measure under 465 yards, as well three par 3s under 155 yards, driving accuracy and mid-to-short iron play are the two most essential predictors of success at the Greg Norman design. The two-time major winner is one of only three players in this field to rank top-15 in fairways gained and long-term proximity from 125-175 yards, a range that could account for upwards of 50 percent of all approach shots this week. While the 25-year-old experienced a bit of win regression in 2022, I’m expecting a big bounce back year. Morikawa is coming off a vintage performance at the CJ Cup, where he gained 2.8 strokes off the tee and 4.5 strokes on approach. I expect the five-time PGA Tour winner to tactically pick apart El Camaleón.

I imagine that Grillo will be an extremely popular selection this week, as he almost makes too much sense. While it’s hard to trust a player to find the winner’s circle who has only recorded one career victory (2015 Frys.com Open) in an eight-plus year career, I’m confident he’ll find himself in the mix at El Camaleón over the weekend. Grillo has already recorded four Top-15 finishes in six appearances here, and with four top-fives in his last nine starts, the Argentinian has been a mainstay at the top of leaderboards of late. Now he is traveling to a short, positional course where he’s experienced loads of success. Similar to Morikawa, Grillo excels on courses that place an emphasis on driving accuracy and wedge play, and he actually ranks second in this field in strokes gained off the tee on courses measuring under 7,200 yards. No reason to overthink this one.

I have a tremendous amount of belief in Pan’s game, and over 2/1 just to finish in the top-40 this week is a bargain. In five appearances at El Camaleón, the 30-year-old has made every cut, with two top-20 finishes. This should not come as a surprise given that driving accuracy and mid-to-short iron play are the strongest aspects of Pan’s game. His history at comparative courses back this up as well. Sedgefield Country Club (host of the Wyndham Championship) and Harbour Town (host of the RBC Heritage) are two of the most distinctive, short, positional courses where driving accuracy and wedge play are most highly correlated with success. Pan has a win and a runner-up at both of these tracks, and I expect him to add to this resume with another high-end finish at El Camaleón.

Hoge is featured with great regularity in this column. The reason is simple. The former AT&T Pebble Beach Pro-Am winner has one specific elite skill set that I believe will make him a ton of money over the next decade on the PGA Tour: he has been a top-five wedge player in the world for close to two years now, and this course should leave with him plenty of wedges. That’s true of many of the venues on the fall swing, which helps explain why Hoge is off to such a phenomenal start this season. The 33-year-old has yet to finish worse than 13th in four starts this year, and I have no reason to believe that this streak comes to an end on a golf course that fits his game to a tee.

Taylor Montgomery, on the other hand, is accumulating his strong results via a far more unsustainable method. Montgomery has gained 27.1 strokes putting in his first four starts of the season, while being a negative approach player on the season. To say that this pace is unsustainable would be an understatement. Considering that putting remains a far more variable statistic than iron play, I’m going to rock with the elite iron player over the elite putter ten times out of ten, and twice on Sunday.

The Trifecta game on Chirp calls for users to make a pick a favorite, a contender and a long shot, all categories based on the Official World Golf Ranking. Here’s a look at the top vote getters in each of those brackets, along with the percentage of support they have received.