‘With how bad I felt…’: How Jon Rahm overcame Jon Rahm this week 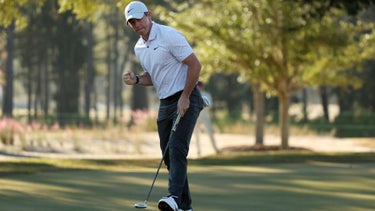 Jon Rahm said he felt “uncomfortable” at the CJ Cup. That didn’t stop him from setting the course record on his way to a T4 finish.

Jon Rahm said he felt “uncomfortable” at the CJ Cup. That didn’t stop him from setting the course record on his way to a T4 finish.

You would assume a player would need to be feeling in form to post a course record.

Not so for Jon Rahm, who in the second round of the CJ Cup fired a nine-under 62, the all-time low mark at Congaree, before ultimately finishing in a tie for fourth on Sunday, at 14 under, four behind winner Rory McIlroy.

“Listen, with how bad I felt Thursday morning, if you told me I was going to shoot 14 under, I wouldn’t believe you, I’m not gonna lie,” Rahm said Sunday evening. “That nine-under-par round was something I never expected.”

Rahm’s 62 was by far his best round of the week. It catapulted him into the 36-hole lead at the CJ Cup, but he wasn’t able to sustain that level of play on the weekend, shooting 70-69.

Despite finishing second to McIlroy in the field in Strokes Gained: Tee To Green for the week, Rahm said he was “battling swing thoughts” throughout the tournament.

“I don’t like to have too many swing thoughts on my approach and definitely thinking more than I would like on some of those shots out there today,” Rahm said after his fourth round. “I was able to still execute and play good golf, it’s just not an easy golf course out there. If I can shoot under par uncomfortably, manage a couple mistakes, I’d still have a chance to win.”

“It’s not really battling,” he said. “I’m just uncomfortable. I don’t want to start thinking about my swing mid-round because I can’t hit 10 balls to fix it, right? So I just try to play and hit the shots and execute. Like I say, I did a really good job with some of them, it’s just not an easy golf course. Any other golf course that isn’t as slippery as this one I could have had a good chance, but here you have to be very precise.”

Rahm began Sunday just one behind McIlroy and took the solo lead after back-to-back birdies on 4 and 5, but he played the final 13 holes in one over.

He clawed back within a stroke of the lead on 14, but his approach plugged in a sandy area short left of the green (all bunkers were played as part of the general area this week). In a must-make situation on 15, Rahm’s birdie effort on the reachable par-4 caught the high lip but didn’t fall.

“I was playing good golf, hitting good shots and when I had a chance to get close, hit a good shot on 14, it was one yard left and plugged in the lip, then the lip-out on 15,” he said. “Just combination of things that didn’t help get the momentum changed, right? Not that I was going to win, but maybe get an up-and-down there, make a birdie, I’m at 16 under. You never know, right, you never know.”

Rahm’s discomfort was noticeable at points throughout the weekend, especially midway through the round Saturday when he made three bogeys in four holes.

The Spaniard won’t be digging answers out of the dirt for at least a few weeks. He said he plans on shutting it down until his next start, the DP World Tour Championship, in Dubai, which begins Nov. 17.