Will Zalatoris emotionally reveals why he broke up with longtime caddie 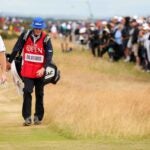 Will Zalatoris and Ryan Goble at last month’s Open Championship.

Will Zalatoris’ business decision was also a personal one, he says.

In a surprising move, the world’s 14th-ranked player split with longtime caddie Ryan Goble in between the second and third rounds of the Wyndham Championship, replacing him with one of his coaches for the week, and another veteran looper for the weeks ahead. While these transactions happen, explanations like the one Zalatoris gave sometimes don’t.

“Yeah, it was the toughest decision I’ve had to make in my golf career,” Zalatoris said. “Ryan’s a brother for life. We’ve kind of had a rough month together, and it was starting to affect our relationship. I know guys say that when they split, but it really was. We were guys that we would love to have dinner together and hang out, and it started — what was going on on the course was starting to bleed off the course, and that’s not what you want.

“He’s an incredible friend, I love him to death, and I told him I had to do what’s best for me. Like I said, he’s just an amazing friend. You know, obviously you can tell how hard this decision was on me, especially the timing of it, but I think it was just getting a little unhealthy for both of us, and it was — obviously it hurts.”

The “rough month” speaks to Zalatoris’ rapid rise. Going back to the start of June, the 25-year-old impressively has, in order, tied for fifth (Memorial), tied for second (U.S. Open), missed a cut (Scottish Open), tied for 28th (Open Championship), tied for 20th (Rocket Mortgage), and this week, he is playing on the weekend — but while he’s compiled a whopping 16 top 10s since the 2020 U.S. Open, including a memorable eight last season as a non-PGA Tour member, Zalatoris has yet to win.

So the change was made, though reporters at the tournament did not ask why the move was made mid-tournament. For the rest of the Wyndham, Josh Gregory, one of Zalatoris’ coaches, will carry the bag, and after that, Joel Stock, who has looped for Ben Crane, Cameron Tringale and Kevin Tway, will take over.

“We both kind of sensed it for a little bit,” Zalatoris said of the split. “And, you know, nothing’s permanent. It’s just something that, like I said, he’s a brother. I love him to death.

“And obviously it was on my mind. I mean, the finish that I had obviously made the day [Friday] a little bit better, but the frustration between the two of us had just kind of carried over over the last month. Like I said, first and foremost, I love him to death and, you know, he’s one of the funniest guys I know and obviously I’ll miss his humor over this next bit, but as I said, nothing’s permanent.”

A reporter then asked Zalatoris: “Hug it out?”

“Yeah, we did, we absolutely did,” he said. “Like I said, most guys in this, when they kind of release a statement and they say they don’t want to ruin a friendship, but this actually was absolutely kind of bleeding into our friendship and I don’t want that. He’s obviously — he’s basically been my best friend for the last three years. He was my only caddie I had on any sanctioned tour, on the PGA Tour and Korn Ferry Tour, and so, like I said it’s the toughest decision I’ve had to make in my golf career and I had to do what I think is best going forward.

“Like I said, nothing’s permanent and we’ll kind of see how everything goes from here.”