Why Webb Simpson left Butch Harmon for another high-profile coach 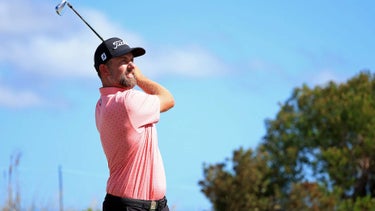 After firing a first-round 67 at the RSM Classic, Webb Simpson described his recent on-course struggles and why he left Butch Harmon.

After firing a first-round 67 at the RSM Classic, Webb Simpson described his recent on-course struggles and why he left Butch Harmon.

For seven-time PGA Tour winner Webb Simpson, picking the highlight from his opening-round 67 at the RSM Classic was easy: his ace on the 219-yard par-3 3rd hole at Sea Island Golf Club’s Plantation Course.

“It was a great moment, great memory,” Simpson said after his round.

It seems like it’s been a while since the 37-year-old PGA Tour veteran, once a top-10 staple and winner of the 2012 U.S. Open, has been in the mix. Though Simpson has made more than $44 million over the course of his 340-event Tour career, it’s been a year since he posted his last top-10 finish, which, as it happens, was at this very tournament last year.

But things are looking up. Simpson currently sits in a tie for 6th place, three shots behind leader Cole Hammer. After his round, Simpson opened up about the recent struggles he’s faced on the course, and the drastic change he made in an effort to improve.

“I didn’t have that much confidence last year. It’s hard to create confidence out of nothing,” he said. “I’d work on my game and I just wasn’t quite getting over the hump, but I feel like the last five, six weeks since I’ve been home, my practice sessions are different and they’re reminding me of what it used to feel like and the shots I’m hitting, the way I’m striking the golf ball. So I’m optimistic.”

Another factor making Simpson feel bullish about the state of his game is the work he’s been doing with new swing coach Cameron McCormick.

“I’ve gotten three lessons now from Cameron McCormick and I feel like what he’s trying to get me to do is get me in positions that I’ve been in before,” he said. “I think I’m going to blame myself for a couple years there I tried to hit the ball so much further that I got into a number of bad habits that it was hard to see because it happens incrementally over time. But Cameron, he pulled out a bunch of swings from 2011 and 2020 and showed those similarities, so we’re just trying to get it back to where that was.”

Prior to woking with McCormick, Simpson was a longtime student of Butch Harmon. But given the distance between them — with Harmon rarely away from his base in Las Vegas, and Simpson’s home in North Carolina, the logistics of continuing a successful relationship became too difficult.

“I had a tremendous run with Butch, I loved working with Butch,” Simpson said. “You know, my best year ever on Tour winning the Vardon trophy was with Butch. It got to a point where he’s in Vegas and it was so hard to get to him, you know, for just one lesson and make it back to Charlotte. So I just started thinking. Not only that, I want to work with a guy I’m going to see on the road more. You know, Butch is not traveling. I’ve known Cameron from a number of years out here, but I just, I remember seeing him on the road quite a bit. So I thought, man, that would be a great start of having a guy like that who’s had tons of success.”

“I didn’t know a whole lot about [McCormick]and the way he teaches,” Simpson said. “It was kind of like, hey, can you come to Charlotte? We spent a day together the week before the CJ Cup or two weeks before the CJ Cup. Yeah, just hit it off. Like I said, he’s going to be traveling a lot with Jordan [Spieth] and Tom and a couple other guys, so it’s nice for me to think I have a guy out here if I need him.”

Simpson resumes his quest for an eighth career Tour victory with his second round at the RSM Classic on Friday alongside Justin Rose and Zach Johnson at 10:30 a.m. ET. Check out the full list of Round 2 tee times here.