What’s buried beneath these 7 golf courses? You might be surprised 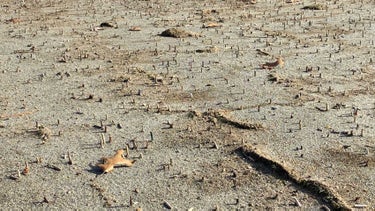 Golf courses have been built all over of the planet, on a variety of terrain. In the process, some unusual items have been covered over.

Golf courses have been built all over of the planet, on a variety of terrain. In the process, some unusual items have been covered over.

Other than superintendents and Ben Hogan, who spent a lifetime searching for answers in the dirt, most of us in golf give little thought to what lies beneath the turf. The farther down we go, the less we know.

In the centuries-long history of the game, courses have been built in nearly every corner of the planet, on a dizzying variety of terrain. In the process, some unusual items have been covered over.

In a departure from our usual agronomy-focused column, we’ve dug deep to bring you a special installment of Subterranean Super Secrets. With an eye underground, here’s a look at 7 courses that have curious finds below.

At this delightful Golden Age design, William Langford and Theodore Moreau used steam shovels to forge dramatic features. But the par-3 7th hole is said to owe its bold look to a different machine. Story goes that the sloped, steep-sided green was built over a railroad boxcar. Skeptics have suggested this is merely urban legend. But we’re not about to verify through excavations, lest the truth wind up spoiling a good yarn.

In Da Nang, where fierce fighting in the Vietnam War unfolded, memories of the conflict endure in countless forms. Among them is a machine gun turret, built into the dunes-fringed bunker complex beyond the 16th green of this Greg Norman design.

Originally laid out by Old Tom Morris, Cleeve Hill is situated on a high point in the Cotswolds, a scenic place to build a course. Or a military stronghold. As evidence, consider the 13th hole, which is known as The Camp because its green sits on the site of an Iron Age fort.

Golf has been played at Hockley for more than a century, making it a relatively new pursuit for locals. Thousands of years before the hackers, there were nomadic hunter-gatherers, and Bronze Age villagers, and, later, Roman occupiers, who showed up around 43 AD. One of those occupiers built a villa, the remains of which, mosaic floors and all, lie beneath Hockley’s 9th green.

Some course construction projects depend on infill rubble, and some of that rubble isn’t ordinary stuff. When, for instance, Kirkintilloch underwent an extension, the demolished remains of Scotland’s national football stadium were hauled in and the course went right on top, covering everything: turnstiles, terracing, even the kitchen sink.

While working on this private course, outside Prague, the architect Robin Hiseman and his colleagues uncovered a beautiful well, some 15 feet underground. It sat in the approach of the par-3 17th. Local archaeologists could not explain why it had been buried so deeply. But now that it protruded into view, it looked so lovely that it was kept as a feature on the hole.

Before giving way to a Robert Trent Jones Jr. design, this site outside Detroit was a natural gas field. Though it would take more energy than you’d probably want to spend, if you burrowed underneath the course, you would find natural rock caverns where that gas was once stored.