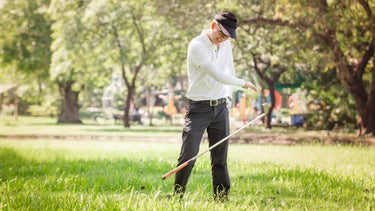 Lessons from vacation — and monsters from White Lotus — highlight this week’s Monday Finish (plus a little golf, too.)

Lessons from vacation — and monsters from White Lotus — highlight this week’s Monday Finish (plus a little golf, too.)

Welcome back to the Monday Finish, where we’re handing out cash instead of candy to trick-or-treaters in honor of LIV’s season finale. Let’s get to it!

Season 2 of White Lotus debuted Sunday night on HBO, but the show’s enduring legacy is already cemented: For at least the next decade, White Lotus will make Americans slightly anxious on vacation.

The opening scene of the first season, set on a resort in Hawaii, felt particularly relevant as I touched down in French Polynesia last week. (Shoutout to my Seattle homies — reasonably priced direct flights to Tahiti now available!) My wife Emily and I were there celebrating our one-year anniversary, and although this job affords me plenty of cool travel, this was the first time I’d ever really done the island-resort-stay thing. And as we arrived at our hotel via water-taxi, welcomed by a small group of waving Hilton employees, that’s where my mind went: Season 1, Episode 1 of White Lotus, when hotel manager Armond (think Ian Baker-Finch with a mustache) and a gaggle of smiling staffers line up to greet a new group of guests. I couldn’t help but wince.

Season 1, after all, turned out to be a show about monsters. Monsters who insist they booked the Pineapple Suite. Monsters who call their mothers and their travel agents to get their way. Monsters who take full advantage of employees’ place in the guest-staffer dynamic. Most of the characters in the show have some monster in them, and — if the premiere was any indication — Season 2 will have its share of monsters, too. As I arrived, I suddenly if I would inevitably become a monster too. By Day 3 would I be sloshing my empty drink at the wait staff patrolling the beach, grunting for a refill while employees muttered about me behind the bar?

And we did witness a few new monsters on our vacation. Condescending monsters. Demanding monsters. Hey-take-my-Instagram monsters. Good-lord-you’re-drunk-for-1-p.m. monsters. But we’d arrived with pretty simple goals — to see some fish, to catch some rays, to drink some fruity cocktails, to slow life down — and found those easily and delightfully accomplished. There were some innovations I’d never thought of (bean-bag chairs on the beach and personal tongs for the breakfast buffet were two favorites). It was a dreamy week. Our hosts were delightful to talk to, curious about our world and eager to share theirs. There was plenty of magic to share.

If you’re asking yourself, how does this tie back to golf? It ties directly to golf! Plenty of golf courses are parts of resorts, and even those that aren’t remain firmly in the service industry. They function because of their valets and cart-washers and bartenders and caddies. These are generally good, interesting people who are eager for you to have a good time. And yet there are monsters who play at every fancy golf course.

But we were soon reminded that being a reasonable resort guest, like being a decent golf course patron, is actually an exceptionally low bar to clear. Every employee is different, of course; some like to chat, gaining energy from your interactions, while others prefer to keep a professional distance. But every person in the service industry likes to be treated like a person. And how difficult is it to be polite on vacation, with every reasonable desire at your fingertips? In other words, I think White Lotus — and the accompanying anxiety of being an American tourist — actually has a simple, useful lesson for golfers everywhere: Just don’t be a monster.

(Worth noting, though, that vacation monsters don’t usually seem to realize that’s what they are. So it’s still possible I was one anyway.)

It’s tough, by definition, for me to know exactly what I missed, but here’s what I gather happened in the golf world the last couple weeks.

This thanks to his win at last week’s CJ Cup, where McIlroy out-dueled Jon Rahm and a star-studded field down the stretch in what must have been the PGA Tour’s best event of the fall season. It makes sense that McIlroy sits at No. 1; he’s been on a run of ridiculously consistent golf including wins at the Canadian Open, Tour Championship and CJ Cup. It would just feel that much more satisfying for McIlroy’s to return to No. 1 had he won one of his four major championship top-10s this year.

Scottie Scheffler falls from No. 1.

With every action comes an opposite reaction, and it’s worth tipping our cap to Scheffler for his run at the top. It was just this spring when he capped off four wins in six starts with a victory at the Masters, after all. Hell of a heater.

Jin Young Ko falls from No. 1.

I did a double-take browsing last week’s leaderboard: Jin Young Ko shot 80-79-WD?! Ko was playing the BMW Ladies Championship Korea, her first start since August, but she’s still battling a wrist injury. Ko had held the No. 1 spot on-and-off since April 2019 and has accumulated 152 total weeks at the top spot, closing in on Lorena Ochoa’s all-time record of 158.

Atthaya Thitikul’s made it to No. 1.

Here’s the happy side of the story: Thitikul, 19 and an LPGA rookie, is the second teenager to hit world No. 1, joining 17-year-old Lydia Ko, who accomplished the feat in 2015. Thitikul has won twice this season and her ascent has been as swift as it has impressive. (She’s hardly brand-new on the scene, though: Thitikul’s first LET win came at age 14.)

LIV pulled off a team event.

I’ll leave the insights on the specifics of LIV’s Miami event to in-house expert Sean Zak, who was there. But it’s clear that LIV pulled off the mega-millions event they’d planned for all season, distributing a whole boatload of cash in the process. YouTube views were unimpressive, continuing a downward late-season trend. But that was to be expected during football season, and while limited interest seems like a strike against LIV, it might not be quite so simple. This is a long runway. Speaking of which…

LIV shared it plans with media for the first time, and the franchise thing is happening. We have captain-owners with 25% equity, teams with uniforms, re-brands, trainers, salaried employees, merchandise and so on. They say they remain in talks with broadcast partners and they’ll dodge things like major championships and the NFL season. It’s still not quite clear where LIV’s dream for the future meets with reality — but time will tell.

Seamus Power is a winner.

Bermuda is an incredibly cool place to go on vacation and actually a pretty cool place to hold a golf tournament, too. It wasn’t one of the PGA Tour’s beefier fields, to put it mildly. But Seamus Power was a worthy winner, moving to No. 32 in the process.

It’s Coaching Carousel Szn, and while it’s surprising to see Ko and Sean Foley split after a successful two-year partnership, high-profile coaching changes have been a regular part of Ko’s career. Things seem amicable; Ko wrote on Instagram that it was for “logistical reasons.” It will be interesting to see who coaches her next — and what that looks like.

I’d be remiss if I didn’t mention that Radmor, arguably the coolest apparel brand in golf, just dropped its fall line. It’s really, really good. And yeah, they sponsor our Drop Zone podcast, so this is very much a biased view, but I legitimately believe it. Anyway, code DROPZONE at checkout will score you 25 percent off at checkout. (Take a peek at that Perkins Birch crewneck.)

3 things to watch this week.

Our Resort Golf King is gunning for a three-peat at Mayakoba. This guy’s golf game travels — recall that he owns the lowest score at one of the northernmost courses in the world.

Thitikul on the throne.

Atthaya Thitikul sits at World No. 1, and her first performance in that spot comes at this week’s Toto Japan Classic. It’s a strong field as LPGA pros gun for late-season CME Globe points, with Danielle Kang, Minjee Lee and Nasa Hataoka among the big names in attendance.

We played next year’s Open Championship course Royal Liverpool. I hit some good shots as well as one of the coldest shanks in my time on this planet. Here’s how that went down: