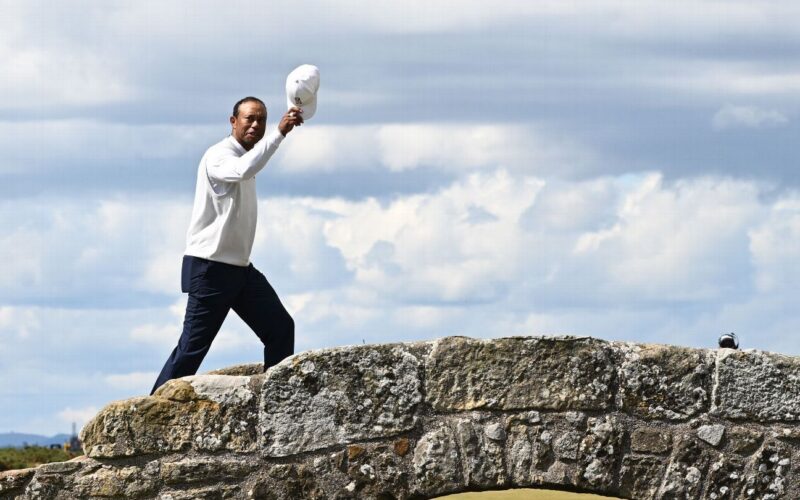 ST. ANDREWS, Scotland — Tiger Woods might have played his final round of The Open at St. Andrews on Friday, but he is confident it won’t be his final start in this championship or another major.

Because of the R&A’s rota, The Open probably wouldn’t return to the Old Course at St. Andrews until 2027 at the earliest. Woods will be 51 then. He isn’t sure his surgically repaired right leg or fused back will be in good enough shape to still be playing at a high level at that time.

Woods’ return to St. Andrews, where he won two of his three Open Championship titles in 2000 and 2005, didn’t go down as he had hoped. He carded a 6-over 78 in the first round and a 3-over 75 in the second. His total of 9 over was well outside the cut, so he won’t be around for the weekend at the 150th playing of The Open.

“To me, it felt like this might have been my last British Open here at St. Andrews,” Woods said. “And the fans, the ovation and the warmth, it was an unbelievable feeling. I understand what Jack [Nicklaus] and Arnold [Palmer] had gone through in the past. I was kind of feeling that way there at the end.

“They understand what golf’s all about and what it takes to be an Open champion. And I’ve been lucky enough and fortunate enough to have won this twice here. And it felt very emotional, just because I just don’t know what my health is going to be like. And I feel like I will be able to play future British Opens, but I don’t know if I’ll be able to play that long enough that when it comes back around here, will I still be playing?”

After watching Woods compete in three majors over the past four months, what do we make of his comeback and what comes next?

The state of Woods’ game

It’s still kind of difficult to gauge the state of Woods’ game because it’s evident his surgically repaired right leg keeps bothering him, and he’s not playing very much golf at all.

The 15-time major champion is currently No. 994 in the Official World Golf Ranking. He doesn’t seem ready to commit to any additional tournaments outside of the majors. After he skipped the U.S. Open in June, it became clear that he doesn’t feel like he even has to play in all of them. He’s going to pick and choose his spots going forward, depending on the course and how he’s feeling.

Despite Woods’ disappointing score, there were some bright spots at St. Andrews. He had a 412-yard drive, the longest of any player Thursday. He averaged 338.9 yards off the tee, which ranked among the top 25 players in the field after two rounds. He hit 65.6% of fairways and 72.2% of greens in regulation.

Woods’ problems came on and around the Old Course’s expansive greens. He used to have the best short game in the world, but he’s playing so little now, it might be difficult for him to turn on and off those “feels.” He needed 70 putts and had four three-putts over 36 holes.

“My two-day play, I made my share of mistakes,” Woods said. “I struggled again [Friday] to get the feel of the greens. I left a lot of putts short again. Same as [Thursday]. I had hit a couple of poor shots, ended up in bad spots. And, again, I just never got anything going.”

Woods’ days of competing for major championships might very well be in his rear-view mirror. Then again, no one thought he would win another major before he captured his fifth green jacket by winning the Masters in 2019. But this comeback seems different, more arduous.

The state of Woods’ health

Woods was asked Friday whether he might play additional tournaments outside of the majors to better prepare for those events, the ones that really matter. He said he didn’t think his body could handle it.

“I understand all that,” Woods said. “I understand being more battle-hardened, but it’s hard just to walk and play 18 holes. People have no idea what I have to go through and the hours of the work on the body, pre- and post-[round], each and every single day to do what I just did. That’s what people don’t understand — they don’t see. And then you think about playing more events on top of that, it’s hard enough just to do what I did.”

Woods had said at the Masters and PGA Championship that his surgically repaired right leg would get stronger over time. Earlier this week, he said the leg was stronger and he did appear to walk with more confidence. He walked 58 holes on the Old Course before the start of the tournament.

“Playing Augusta, I didn’t know,” he said. “My leg was not in any condition to play 72 holes. It just ran out of gas. But it’s different now. It’s gotten a lot stronger, a lot better. Hopefully it will continue to get that way. But again, as I said, having a lot of hardware in there makes it a little bit of a challenge.”

Because Woods was so seriously injured in a car wreck outside Los Angeles in February 2021, after which he said doctors nearly had to amputate his right leg, it’s easy to forget that his body already contained more hardware than a Home Depot.

About a month before the wreck, Woods had his fifth back operation in the past seven years. The procedure was his fourth microdiscectomy, which was supposed to alleviate nerve pain in his lower back, and his first back surgery since a spinal fusion in April 2017. He also had surgeries on his left knee and missed extensive time because of leg, Achilles tendon, elbow and neck injuries.

“Well, my body certainly can get better, but realistically not a whole lot,” he said before The Open. “It’s been through a lot, and at 46 you don’t quite heal as well as you do at 26. So it is what it is.”

What’s next for Tiger?

Woods didn’t say when his next tournament appearance would come. He isn’t committed to any event, although it’s difficult to imagine that he won’t play in the Hero World Challenge in the Bahamas in November. He is the event’s host and the tournament benefits his foundation and other charities.

It also would be a surprise if Woods didn’t play in the PNC Championship in Orlando, Florida, on Dec. 15-18 with his son, Charlie. The pair finished second in the event last year. It was the first time Woods had played since the car wreck.

Woods’ competitors hope they’ll see more of them on the PGA Tour.

“Wish him nothing but the best,” Jon Rahm said. “Obviously, he’s done amazing things here and amazing things everywhere in the world. At this point, [I’m] hoping he can stay healthy and live a normal life from now on. You can tell he’s in pain. I know he puts a front out there and he tries to walk normal, but you can tell in certain moments going down some of the hills. You can tell he’s suffering.

“So hopefully they can — not fully fix it, I don’t know if they’ll be able to — but minimize it and [he can] have a normal life. As normal life as Tiger Woods can have obviously.”