What it looked like as Ashleigh Buhai gave away The Open, then took it back 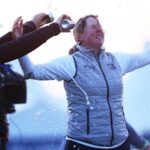 Ashleigh Buhai is showered with champagne after winning the AIG Women’s Open.

MUIRFIELD, Scotland — David Buhai is 6-foot-4 or so, a jolly giant, but on this day he was not tall enough. He climbed up onto the back of a golf cart for a better view of his wife, 40 yards away, handing away a 3-shot lead.

Most of the damage had been done in the fairway bunker up the left side of 15. The Muirfield bunkers had gotten everyone in the field this week, and on 15 they finally claimed Ashleigh Buhai. Her bogey pitch ran by the hole and then her double-bogey putt missed as well. David was no longer on the back of the golf cart. He was 200 yards up the next hole, his plastic cup of beer half-empty, his nerves extremely unsettled.

While watching golfers crumble, thrive, croak and triumph is entertaining, watching their families take that in is equal parts excruciating and endearing. There’s vivid unselfishness mixed in with plenty of greed — wanting something so badly for someone that you need it for them.

Shortly after Ashleigh made triple bogey on that brutal 15th, finally giving back every stroke of what began as a 5-shot lead, her aunt Mandy was frantic. “I just want to cry,” Mandy said, a South African flag tied around her neck, flowing behind like a cape. Mandy and her husband Darren had driven seven hours that morning, up from the southwest of England. You wouldn’t blame her for tears. Her niece had been in control of the championship for the last 24 hours.

There was some confusion for among Team Buhai about where Ingee Chun was at on 17, now the greatest threat to their favorite golfer. And plenty of confusion about how Hinako Shibuno had dropped back to eight over. But David was back now, alongside Michael Paterson, the husband to Ashleigh’s caddie Tanya. There is a sense of comfort once you blow a lead. Sustaining it implies pressure. Surrendering it offers the chance to claim it back.

Marina Alex had come out to watch, and no, it doesn’t help the situation when a Tour pro looks sick for another Tour pro. David climbed up two more golf carts while Ashleigh parred 16 and 17. On 18, a production crew stuck a lens in his face: husband cam. He was walking this hole for the second time today, because his other support gig is caddying for Jeongeun Lee6, a major champion in her own right. Lee6 met him behind the 18th green, bottle of champagne in hand. A tournament staffer instructed her how to pop it with her thumb, not yank it off with her hand. Not just yet, though …

If you’re not familiar with the Buhais, that’s forgiven. On Sunday morning, Ashleigh was ranked 84th in the world and was never a winner on the LPGA Tour. But when you ask around, the Buhais seem beloved. They’ve gone on safari with Emily Christine Pederson. They rent houses on the road with Carlotta Ciganda. “She’ll be a popular winner on Tour,” caddie John Pavelko said before the final round. “She’s someone people want to see win.” But also from John: “What course has she been playing?”

Ashleigh has sprinted to that 5-shot lead by shooting 65 in the second round followed by a preposterous 64 in the third. Just when Muirfield started getting tough, she made it look easy. “Every time you’re in this position, you get a little bit more familiar with it,” she said Friday night. On Saturday night, she decompressed with games of Uno, and Sunday morning she passed the time doing laundry. If there were nerves when she arrived at the course, you couldn’t see them. She concluded her practice session by taking a phone call, signing autographs and posing for photos … all right before teeing off in the most important round of her life.

“It’s always harder for those watching,” Ashleigh would say later, reminding the press that in 2019 it was David who lugged around a backpack full of beers to ease the tension. But to be fair, she gave him plenty to be nervous about.

“As much as Ash is loved, people just gravitate to David,” Kasper Broch Estrup said after the mood quieted. His wife Nicole had missed the cut but they hung around to walk with the Buhais all weekend. The crew behind 18 grew in size every few minutes. First, Madelene Sagström, Gaby Lopez and Jodi Ewart Shadoff. Then caddies Jason McDede, Jack Clarke, Kyle Morrison and Bradley Beecher.

The next 80 minutes, according to Ashleigh’s uncle Darren, were “terrible.” Four excruciating playoff holes, the sun fading in the distance. The caddies, useful as ever, made beer runs every 20 minutes.

On the first hole in the playoff, Chun’s approach fell out into the greenside bunker. Death, certainly, for people like you and me. R&A handlers tapped on David’s shoulder, urging him to get into position to run onto the green. He wanted nothing to do with it. “I’m good. I’m good,” he said, not moving an inch. “100%. Thank you.” Caddie knows best. Chun splashed out of the bunker to two feet.

Every playoff hole brought something different, except for the score. Two pars on the first.

Marina Alex’s mother, Marissa, leaned in with a simple question: “How you doin’, husband?”

“Not good at all,” David said. His exhales filled his cheeks, as though he were blowing out the candles of a birthday cake.

Matching bogeys on the second.

“Do you need some wet wipes?” he was asked.

“I’ve been needing to go to the toilet for awhile,” David said before running off to address the issue, returning with more beers in hand.

Another pair of pars on the third playoff hole.

“Dave, this is like Le Mans, but times a hundred,” shouted McDede. Le Mans, for the uninitiated, is a 24-hour sports car race held annually in northwest France. It’s pure endurance. Which driver can take their car the furthest in 24 hours. It was the perfect comparison — night was falling all around Muirfield. Buhai and Chun were headed to the play the 18th for the fifth and final time Sunday. If they tied again, we were all going to come back Monday morning, and David would be nursing a hangover. The beer had worked on his nerves, and his own censor. The cameraman who had fixed the lens on David’s face for over an hour now needed a break so the camera sat on the tripod.

“You can’t put it on a f—king tripod now,” he exclaimed with a massive smile. “It’s either on your shoulder or you’ve got to go.”

When Chun’s tee ball flared out to the right and bounded into a bunker, most of Team Ashleigh exhaled. Suddenly, a mood switch from David: “I want Ash to win fair and square. Not via a block in the bunker.”

She did win fair and square, ironically, by blocking her own approach into the greenside trap. The finisher at Muirfield has a green hump in the middle of its sand, enough to make you forget about the green wall ahead of you. It’s the kind of shot players practice on Mondays, Tuesdays and Wednesdays, assured that somewhere on the path from Thursday to Sunday, they’ll find a weird moment in a weird bunker and they’ll want to know how to do it. Buhai herself practiced the bunker shot her idol Ernie Els hit on Muirfield’s 13th, en route to victory in 2022. And future generations will practice the bunker shot she hit starting early Monday morning.

That’s when we really learned how tall David Buhai is. His hands shot up into the sky. His voice bellowed. His pint glass was emptied onto the turf. He had five different pairs of hands reaching out to hug him.

The group quieted down just in time to hear Nicole Broch Estrup’s four words of analysis: “What a f—king shot.” What a shot, indeed.

There’s no way David Buhai remembers the next few seconds, which were awkwardly quiet as his wife marked her ball two feet from the cup, and as Chun missed her 20-footer for par. When Ashleigh tapped in for her 4, David ducked under the ropes and bounded in her direction, reaching his wife even before her caddie could, bear-hugging her into the air. She had just joined Els and Gary Player as South Africans to win an Open on these vaunted grounds. Player had messaged her during the week, egging her on. The flag her aunt drove up from Bath was about to become the photo prop of the night.

“Our life’s changing,” David would say, arm in arm with Michael Paterson as Ashleigh gave her victory speech. Their wives won The Open and no number of beers could drown out the reality. “Our lives are changing, I’ll tell you that.”

As Ashleigh headed off to her victorious press conference, David, Michael, Aunt Mandy, Uncle Darren and a dozen others trailed in her wake. For hours they had felt this party coming, and had prepared a tasty catchphrase for the night. As Muirfield descended into darkness, David took it upon himself to shout out one final reminder.