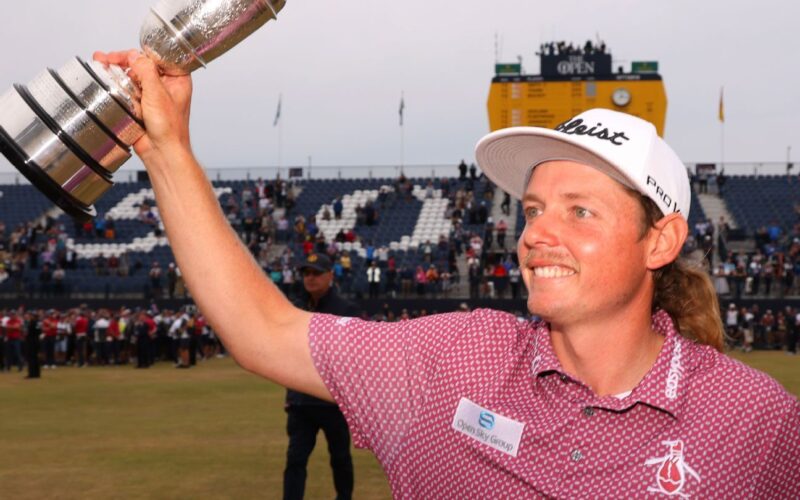 Smith became the sixth straight player in his 20s to win a major and the second consecutive first-timer. Matt Fitzpatrick picked up his first at the U.S. Open at The Country Club in Brookline, Massachusetts, in June.

Unfortunately, the next major, which is the Masters, won’t come for another nine months. The FedEx Cup playoffs will still be played in August and the Presidents Cup in September, but another major season has come and gone.

Which players are next in line to become major champions in 2023? Here are my best guesses, unless, of course, one of my predicted winners jumps to LIV Golf and is declared ineligible by a governing body between now and then.

Rory McIlroy reflects on his performance at the Open Championship after coming in third place.

Besides Scheffler, who picked up his first major by winning a green jacket this past spring, no one has played better and more consistently this season than McIlroy.

McIlroy finished in the top 10 of each of the four majors this season: He was solo second at the Masters, eighth at the PGA Championship, tied for fifth at the U.S. Open and third at The Open. According to research by ESPN Stats & Information, McIlroy is only the fourth player to average a top-five finish in the majors without winning one since 1983. Rickie Fowler (2014), Ernie Els (2004) and Ben Crenshaw (1987) were the others.

McIlroy, a four-time major champion, has now played eight full seasons since winning his last one (the 2014 PGA Championship). He has endured so many near-misses during that stretch, finishing in the top five in majors nine times during that span and 17 times in the top 10, the most by any player since 2015.

At some point, the drought has to end, and there wouldn’t be a better place for McIlroy to do it than Augusta National. By winning a green jacket, he would become only the sixth player to complete the career grand slam during the Masters era. Jack Nicklaus, Tiger Woods, Ben Hogan, Gary Player and Gene Sarazen are the only ones to accomplish the historic feat. In 2023, it will be McIlroy’s ninth attempt in trying to join them.

McIlroy seemed to exorcise some Masters demons in April. He famously blew a 4-stroke lead in the final round in 2011, hooking his tee on No. 10 into the cabins and carding an 80. This past spring, he shot 8-under 64 on Sunday, matching the lowest score ever in the final round of the Masters. He finished 3 shots behind Scheffler and had some fun on the 18th green, when he holed out from a greenside bunker.

McIlroy has finished in the top 10 at the Masters six times since completing three-fourths of the career grand slam. He seemed to figure out some things this spring.

“I’ve always known that I can do it,” McIlroy said after the 2022 Masters. “I’ve played good enough around here, maybe just haven’t strung four rounds together like that, but I’ve always known that I have the game to win at this place. It’s just a matter of having that game for four days in a row and not making big numbers and shooting yourself in the foot, I guess.”

Young all but wrapped up PGA Tour Rookie of the Year honors when he eagled the 72nd hole at the Old Course on Sunday. That shot secured him solo second place, 1 shot behind Smith.

Young will certainly have much of the galleries behind him at Oak Hill. He grew up outside of New York City and attended prep school on the Fordham campus. His father, David Young, is the longtime head pro at Sleepy Hollow Country Club in Scarborough-on-Hudson, New York, just north of the city.

Young hasn’t yet won on the PGA Tour, but his rookie season has been sensational. He has nine top-25 finishes in 21 starts, including six top-10s and four runner-ups. He also tied for second at the Sanderson Farms Championship, Genesis Invitational and Wells Fargo Championship. It’s only a matter of time before he claims his first victory.

Young is one of the longest hitters off the tee on tour. He is second in shots gained off the tee (.942) and sixth in driving distance (317.6 yards). He’s an improving irons player and a pretty good putter.

Oak Hill’s East Course last hosted a major in 2013, when Jason Dufner defeated Jim Furyk by 2 strokes. Nicklaus (1980) and Shaun Micheel (2003) won the other PGA Championships that were played there. The course underwent a restoration in 2013. The project involved the removal of many trees and even a pond. There’s an entirely new par-3 fifth hole.

With Smith having won the The Open at St. Andrews, Schauffele, Patrick Cantlay and Norway’s Viktor Hovland will head into 2023 as the best players in the world without a major championship. Schauffele did win a gold medal at the 2020 Summer Olympics in Tokyo.

Schauffele, 28, also has been pretty good in the majors, too. He has nine top-10 finishes in majors since 2017, including a pair of runners-up at the 2018 Open at Carnoustie and 2019 Masters. He missed the cut at the Masters, but finished in the top 15 in the other three majors this season.

Schauffele picked up his first individual PGA Tour victory in more than three years when he won the Travelers Championship in late June. He won the Scottish Open the week before The Open, after also finishing first in the JP McManus Pro-Am, a 36-hole charity event in Ireland. Schauffele also teamed with Cantlay to win the Zurich Classic, a team event in New Orleans in April.

A native of La Jolla, California, Schauffele would probably like nothing more than to win his first major in the first U.S. Open played in Los Angeles in 75 years. The city hasn’t hosted the tournament since Ben Hogan won at Riviera Country Club in 1948. Los Angeles County Club will become only the third Southern California course to host the U.S. Open; Riviera and Torrey Pines Golf Course in San Diego (2008 and 2021) are the others.

Rahm is one of the best ball-strikers in the world, which will come in handy if the winds are blowing hard on the west coast of England next year.

Royal Liverpool Golf Club, which will be hosting The Open for the 13th time, is considered one of the most difficult courses in the rota. In 2006, when Woods won his third Claret Jug, he famously hit his driver only once in four rounds, instead hitting irons off the tee and mid and long irons into greens.

Rahm picked up his first major at the 2021 U.S. Open at Torrey Pines. He finished in the top 10 in each of the majors in 2021. His results in majors weren’t as good this season, but his form was still pretty good. He leads the tour in ball-striking and shots gained off the tee (1.106) and is sixth in shots gained total (1.805).

Rahm has never played in an Open at Royal Liverpool. He tied for third at Royal St. George’s in 2021 and tied for 11th at Royal Portrush. He would be the first player from Spain since Seve Ballesteros to win The Open won his third Claret Jug in 1988.

It will be the first time Royal Liverpool has hosted The Open since McIlroy won in 2014. There will be an entirely new par-3 17th hole when it is played there next July.