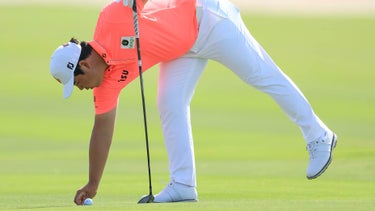 Viktor Hovland nearly turned a two-shot lead into disaster on the final hole, but made a sensational up-and-down to clinch his title defense.

Viktor Hovland nearly turned a two-shot lead into disaster on the final hole, but made a sensational up-and-down to clinch his title defense.

Viktor Hovland was cruising to his second straight Hero World Challenge win until the 18th tee.

The Norwegian star was leading by five early on the back nine, but a resurgent run of birdies from Scottie Scheffler had cut the lead to two on the final hole.

A wayward tee shot then led to a gamble on the approach. Hovland tried to power his way onto the green from 217 yards in the rough above a fairway bunker.

He instead found the water.

“It’s like when you’re standing there with a two-shot lead, it’s like that’s the last thing you can do,” he said after the round. “Basically just do anything else but hit it in the water on the second shot.”

However, Hovland limited the damage. His fourth from 119 found the green and he rolled in bogey try from about 20 feet to slam the door on Scheffler who had about 10 feet for par.

Hovland’s final-round 69 was enough to pull away from the star-studded 20-man field and finish 2 shots clear of the World No. 2 Scheffler at 16 under to win his second-straight Hero World Challenge. He joins tournament host Tiger Woods as the only player to win the Hero in back-to-back years.

Hovland started the day three up on Scheffler, but thanks to a chip-in eagle on the par-5 6th, the reigning Masters champion pulled even with Hovland at 14 under.

The tie lasted about 90 seconds.

Hovland drained his own birdie putt to restore his lead and watched as Scheffler came crashing back to earth with a bogey at the short par-4 7th and a disastrous double bogey at the par-5 9th to fall five back. The birdie makes were characteristic for Hovland on the weekend as he had just 57 strokes on the greens across the final two rounds. He was relying soley on the AimPoint method.

“The last two days it’s been still windy but fairly calm and I was just able to rely on my feet a lot more,” Hovland said. “As soon as you see a couple putts go in, it’s just easy to get confidence from that.”

Scheffler battled back on the back side with birdies at 11, 14, 15 and 16 to close the gap, but it was too little too late as Hovland had a mini birdie run of his own with birdies on 14 and 15, the second of which coming on a nifty up-and-down out of the front right greenside bunker, to give him a three-shot cushion with three to play.

Scheffler was unable to capitalize on a good tee shot at the last when his approach sailed right into greenside waste bunker. His chip hit the stick but kept running by and he made a bogey. Had he won, Scheffler was projected to reclaim the world’s top ranking from Rory McIlroy.

The win, which is not an official PGA Tour event, caps an interesting year for Hovland, who co-led with Rory McIlroy going into the final round of The Open Championship and finished tied for fourth, but did not win in 2022 until this week.

“Definitely feels a little bit better ending up with a win,” he said. “I think it was a step in the right direction even though I feel like I should have won more tournaments this year.”

Hovland has shown an affinity for tropical locales as he picked up his first PGA Tour win at the Puerto Rico Open, notched back-to-back victories at the World Wide Technology Championship at Mayakoba in 2020 and 2021 and now has back-to-back wins in the Bahamas at Albany.