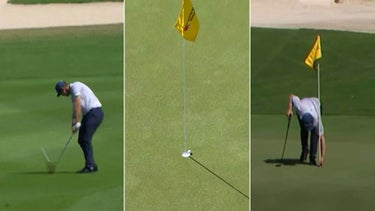 Seamus Power wasn’t even in the top 400 in the world 18 months ago. Now he’s top 30. After the RSM Classic, he reflected on it all.

Seamus Power wasn’t even in the top 400 in the world 18 months ago. Now he’s top 30. After the RSM Classic, he reflected on it all.

Rewind to May 2021, and Seamus Power is a name maybe even the golf junkies hadn’t heard of.

Back then, the Irishman who played junior golf with the likes of Shane Lowry and Rory McIlroy had managed to finish inside the PGA Tour’s top 125 only once in four seasons. He represented Ireland in the 2016 Summer Olympics, but some 18 months ago, he wasn’t even in the top 400 in the world and had missed five of nine cuts to start the season.

But something clicked in his next start. He recorded just his seventh career top-10 at the Byron Nelson, then didn’t finish outside the top 19 in his next five starts, culminating in his first PGA Tour win at the Barbasol Championship in July.

After a 2022 season that saw him make it to the second leg of the Tour’s playoffs and earn a second career win last month at the Bermuda Championship, he’s leading the FedEx Cup as the Tour heads into its holiday break. He’s also caught the eye of European Ryder Cup captain Luke Donald.

“I saw him in Bermuda, just got to congratulate him on being captain, and I’ve talked to him a couple times since,” Power said Sunday after recording his third-straight top-5 on the PGA Tour at the RSM Classic. “Nothing major. It’s nice to be at least on the radar, something obviously I wouldn’t have been a couple years ago. There’s a lot of golf to be played yet, but certainly off to a good start in the standings so far.”

Having now cracked the top 30 in the Official World Golf Rankings, Power could potentially be a rather important part of Team Europe when the Ryder Cup tees off in Italy next fall. Donald’s team will be without many stalwarts over the past several decades; Sergio Garcia, Ian Poulter, Lee Westwood, (initial 2023 captain) Henrik Stenson, Paul Casey, Martin Kaymer and others figure to be ineligible due to commitments to LIV Golf.

Power isn’t getting ahead of himself just yet, instead remarking on how his PGA Tour status is locked up through 2025 and contending in next summer’s FedEx Cup playoffs.

That’s a wildly different tune than where he was less than two years ago. Yet, he says not much has changed.

“Just kind of become more and more comfortable, kind of figure out what you’re doing with your game and kind of figure out what you can and can’t do and just kind of being comfortable with that,” the 35-year-old said. “For a long time, it’s easy, especially out here you see guys every year, you see young guys that can do cooler stuff like hitting it longer and all this kind of stuff … Yeah, it’s been a good stretch of golf, and hoping it’ll continue.”

For Power, he said he knows he can chip and putt with the best of them on the PGA Tour. In six starts this season, he’s 20th on tour in SG: Putting and 30th in SG: Around-the-Green.

He even said he didn’t hit the ball well this week at Sea Island, but knowing his short game could bail him out allowed him to feel like he had a chance. That trust must have taken some pressure off his ball striking, as he actually finished third in the field in SG: Approach-the-Green for the week on his way to a T5.

“I only made a couple bogeys, and the way I was hitting, it should have been a lot more, but I’ve always been very good at that,” Power said. “Then you just figure out shot shapes that you like to hit to certain shots and sticking to that and having confidence in that in all the situations that we kind of we come across has been key.”

In a somewhat ironic question to a 35-year-old just reaching the peak of his career, Power was asked Sunday if he was a patient guy.

“Try to be. Some days it’s easier than others,” Power said. “I think that’s just nature. Humans, that’s the nature of the game. Some days you wake up and things seem easy and other days you have to work hard at it. So it’s just trying to get to a consistent spot where you can get that patience as high as you can.

“Patience is always going to be good no matter what you’re kind of doing in life. It’s being able to evaluate when it’s needed versus when there’s a change that is needed. It’s a constant battle, constant work in progress and hopefully, I can stay on the right side of it.”

Power still has to keep his play up if he wants to make the team. He’d still require one of Donald’s captain’s selections if the team was picked today, as he’s seventh in the World Points list after this week.

But if there’s anything Power has learned from his rise, it’s probably patience, and it seems like he’s patient enough to let things work out around him while he plays his own game.