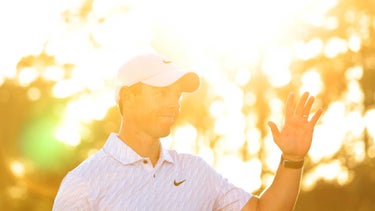 GOLF’s staff discusses Rory McIlroy’s return to No. 1, a LIV Golf exec’s comments on the majors, elevated events and more.

GOLF’s staff discusses Rory McIlroy’s return to No. 1, a LIV Golf exec’s comments on the majors, elevated events and more.

Check in every week for the unfiltered opinions of our writers and editors as they break down the hottest topics in the sport, and join the conversation by tweeting us @golf_com. This week, we break down Rory McIlroy’s return to No. 1, a LIV Golf official’s comments on the majors, the PGA Tour’s schedule and more.

1. In an entertaining back-nine back-and-forth on Sunday, Rory McIlroy reclaimed World No. 1 and won the CJ Cup over Kurt Kitayama. For McIlroy, it marked another strong finish — over his past five starts now, he’s won twice, tied for second, finished fourth and tied for fourth. How much do you suppose his role of de facto PGA Tour leader off the course has inspired his resurgent play on the course?

James Colgan, Assistant Editor (@jamescolgan26): Cause and effect? I don’t think so. Rory was the best player on the PGA Tour before he became the de facto president of it. But the success has certainly affirmed that position. Golf has never needed a star of his stature more than right now. Good on him for delivering it.

Jack Hirsh, Assistant Editor (@JR_HIRSHey): It’s interesting because up until the Canadian Open, there was kind of a feeling the responsibility was weighing McIlroy down a bit. Now he’s the hottest player in the sport. I think clearly he was motivated when the first LIV event teed off, as evidenced by his dig at Greg Norman when he won at St. George’s. Of all the players who could have won the FedEx Cup last season, the first when the Tour had a legitimate rival, McIlroy had to be the best-case scenario for the Tour. I guess what I’m saying is it’s clear he’s motivated to back up his words off the course in support of the Tour with his play on the course.

Claire Rogers, Social Media Manager (@kclairerogers): Like James said, I’m not sure they’re cause and effect. I do think they’re both a result of him growing up a lot both on and off the course. Call it maturing or perspective or whatever you want, but McIlroy has reached a new level of poise in front of the media. His thoughtful answer to Tom Kim’s question was the perfect example of it, and I think we’ll only see his role of de facto PGA Tour leader off the course grow as he continues to play well.

2. LIV Golf, along with the PGA Tour’s fight against the Saudi-backed series, was profiled in a lengthy story by the New Yorker. Among the newer revelations was a comment from Majed Al Sorour, the head of the Saudi Golf Federation and managing director for LIV Golf, who said: “If the majors decide not to have our players play? I will celebrate. I will create my own majors for my players.” Al Sorour, through a statement, later issued a statement in response, saying in part: “I had a casual conversation with a New Yorker reporter at LIV’s Boston event a few weeks ago, during which I expressed my frustration at the unfortunate blackballing of LIV Golf players by the PGA Tour. When it comes to the majors, tournaments that stand alone and are independent of LIV, I have the utmost respect for the majors.” Our question is simply this: What’s your takeaway here?

Colgan: My takeaway is, primarily, that the president of the Saudi Golf Federation should have a better grasp on his “casual” conversations, particularly when they’re with reporters from the New Yorker. Everything else struck me as pretty standard rich guy hyperbole.

Hirsh: Seems the go-to response for LIV execs and players when they don’t like the perception of a comment is to say the conversation was off the record (See Mickelson, Phil). Credit our colleague Sean Zak for this idea, but I’m not really sure who has “casual conversations” with New Yorker reporters. The way our profession works is everything is on the record until someone says otherwise, and it’s clear between the two parties. Important to note that Sorour never said he didn’t say what he was quoted as saying. I think he was intending to build up LIV further in the event its players are unable to compete in the majors, but obviously, it came off as a dig at the majors. It’s not a great look when the bodies that run the majors are the ones who will decide if LIV events get ranking points.

Rogers: There seems to be a lot of miscommunication when it comes to golf-related interviews lately. I think it’s safe to assume that if you are speaking to a journalist such as, say, Alan Shipnuck or someone from the New Yorker, unless something is “off the record,” it’s fair game. The “I’ll create my own majors” comment did make me laugh, though.

3. On the PGA Tour, next year’s four additional elevated events were announced, with the Waste Management Phoenix Open, the RBC Heritage, the Wells Fargo and the Travelers joining the previously announced tournaments that will receive $20 million purses and the promise that the Tour’s top players will be in the field. With that portion of the schedule now set, who are the winners and losers?

Hirsh: Obviously the winners are the elevated events and specifically the city of Phoenix. All of these tournaments will be getting the PGA Tour’s best 20 players, and Phoenix will be getting that and the two best NFL teams in the same weekend for the Super Bowl. Make your hotel bookings now. The losers will be the Honda Classics and other tournaments sandwiched in between elevated events. The Honda sits between back-to-back elevated events before and after, and what was once a rising Tour stop, given its proximity to many pros’ homes in South Florida, may not have many big names this season. We expect there will be four elevated events rotating around each season so we can only hope the tournaments that get the short end this year will get their turn in the elevated sun soon. Part of this issue also runs around the fact the Tour had to work with a schedule that was mostly set already. With a year to set up the schedule, we will likely see a radically different look in 2024.

Rogers: I’m not a football gal so I’ll let James and Jack cover the WMPO and Super Bowl overlap in Scottsdale and instead focus on the Travelers. Cromwell, Connecticut is winning big time here. I’ve been to the Travelers a handful of times, and it has some of the kindest, most engaging volunteers I’ve come across. It’s had a smaller-tournament feeling to it for as long as I can remember, so I’m excited for it to become one of the can’t-miss stops on the PGA Tour. The losers? Fan parking lots. Good luck, folks.

4. Speaking of the schedule, Rory McIlroy, at this week’s CJ Cup, was asked what the fall season should look like, and he said: “Football. I mean, it’s football season, right? I think we need to get to the place where it’s not oversaturated. I would love us to come back in January and people will have missed watching competitive golf. I don’t think that happens right now because there’s 47 events a year.” While that may not be a possibility in the immediate future, is there a middle ground here?

Hirsh: I think the best golf that could be on in the fall is Korn Ferry Finals, Q-School, etc. Those are events you don’t have to have end on the weekend and go up against football. Now that I type that, would the Rorys and JTs of the PGA be OK playing Tuesday through Friday if there were any fall events? I’m sure there’s still reason to watch the big names in the “offseason,” but events like the father-son and the Hero should be enough. Let the grinders have their moment while the top dogs take a rest.

Colgan: I love that idea, Jack. I also love the idea of blasting the fall season into the sun. Let’s miss golf — or at least the week-to-week grind of the PGA Tour — it’ll make us all better fans in the long run.

Rogers: I agree with Jack. I also appreciate golf about 10 times more when I’ve been able to properly miss it. Two weeks off wasn’t long enough for me to miss it!

5. On the LPGA Tour, Lydia Ko won the BMW Ladies Championship for her 18th career victory, continuing a strong season. “This is probably the best I’ve played, the most consistently I’ve played,” Ko said. That being said, can Ko get to 25 victories?

Colgan: The LPGA gets younger and better every single week, but there’ll always be room for players with her short game to find wins. I think 25 is not just a possibility, but a probability.

Hirsh: *Checks Notes* Lydia Ko is my age (25)? I think there’s obviously a fear of burnout given she started her pro career at age 16 (when she had already won on the LPGA Tour). However, Ko has already gone through some ups and downs in her career and could just be entering her prime. She could choose to walk away at any time, of course, but I think the better question is whether she could win 25 times before she turns 30?

Rogers: I’ll be surprised if Lydia Ko doesn’t get to 25 victories. Her first win was a decade ago, she’s at the top of her game right now and she’s only 25. I could see her getting to 20 wins before the end of 2023.

6. In one of the week’s more enjoyable moments, 20-year-old star Tom Kim interrupted McIlroy’s pre-tournament press conference and asked his own question. “Rory, I have a question for you,” he said. “What’s it like having so much success as a young player? Coming out and many years on tour, how do you manage all that?” — and McIlroy offered a lengthy response. Our question, though, is how might you advise Kim going forward?

Colgan: I’d advise him to keep his sense of self, his earnestness and his humility. Sometimes, it’s easier to abandon those things in pursuit of money and fame, but the reward for maintaining one’s true personality as they reach true stardom is often several times greater.

Hirsh: Considering part of McIlroy’s response was to mention he did not have the level of success Kim is having so early in his career, I would direct him to one of the only players who can relate to him: Tiger Woods. Tiger seems to be a little more open to that sort of thing in this part of his career. If I’m Tom Kim, I’m trying to play as much golf with Tiger as he can (or if Tiger can). Maybe he can get on Tiger’s TGL team?

Rogers: I want to see more Tom Kim. I want to see as much of Tom Kim as possible, whether it’s asking questions, answering questions, hanging out with Si Woo Kim on the putting green or on the International Team’s Instagram page. I’m not worried about his discipline. He’s only 20 and seems to have it figured out. My unsolicited advice to him would be to enjoy the ride.