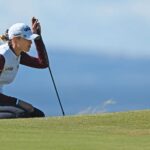 Nelly Korda shot a first-round 70 at Muirfield during the AIG Women’s Open.

GULLANE, Scotland — Nelly Korda was upset, and understandably. She had just roasted a tee ball on 18 — which rode the cross wind from the right edge of the fairway — and watched it bounce into a bunker on the left side. Or so she thought.

Korda let her grievances out with a single word — “F–k” — as she slammed her driver head onto the tee box. The bunkers hadn’t been good to her Thursday, during the first round of the AIG Women’s Open Championship, and the prospect of dealing with another one, right at the end of the round, had fired her up.

But her eyes had lied. The ball didn’t slip into one of Muirfield’s sandy hell holes, but instead skirted alongside it, rolling into the wispy first cut. No problem at all. She’d make a finishing par 15 minutes later, polishing off an exhausting, one-under 70. Five shots off the lead.

Sometimes it takes an entire field of play to understand what makes a championship course a championship test. Other times, it takes just one player. And that was Korda on Thursday. She flighted tee shots into the wind, chipped long irons down the breeze, was dealt bad breaks and even earned some bad ones, too. Muirfield, and the challenge of Opens in general, cooked into all 70 shots.

Part of the brilliance of this course is its routing. You likely haven’t seen another like it. The first nine follows one big clockwise loop around the edges of the property, and the back nine, chaotically embedded within that loop, travels counter clockwise.

“You think they all run in the same direction, but they’re just a little different,” Korda’s caddie Jason McDede said after the round. The wind is high-priority for them. He shouts out the direction one final time right before she steps into a shot.

Best course in the world? Who knows if he meant that. But at the very least he meant Best Open Host. And how great is it then, that the R&A finally brought the women’s game to what some consider … the best one!

McDede helped escort Korda around the course in the mega-watt grouping of the top three players in the women’s game: Nelly herself, Jin Young Ko and Minjee Lee. Player and caddie agreed on a “chippy 5-iron” from 225 yards on the 17th, over the cross bunkers, funneling on the baked-out turf that McDede said is rolling “like a bowling alley.”

Driver, 5-iron, 540+ yards, leaving her her second eagle putt of the day (she made the first one), thanks largely to a whole lot of wind. “That to me is also the course’s defense, because you really have to concentrate,” Korda said. “It’s pretty mentally draining, for sure. You have to play a round with a lot of different swings. I mean, I hit an 8-iron 190 and then I hit a 4-iron 180 today. That’s British Open. But I think it’s fun. It’s nice to do once a year or a couple times a year. I wouldn’t do it every week but it’s a lot of fun.”

“There really aren’t any pars,” added McDede. “I know that sounds weird but you’ve got an 8-iron into a par-5 and then you turn around and you’ve got a par-4 playing 600. I know it’s cliche, but you just have to take it as it comes.”

It is cliche. But this game is built off cliches. Tee it high, let it fly. Only Korda is enjoying flighting her way around the course this week. That stinging trajectory that carves through the wind. It repeatedly made her the longest player in her group Thursday, able to hit 4-irons into 14 and 15 — the two hardest holes on the course, playing straight into the fan — while Ko and Lee both played fairway woods. “I think I hit my 4-iron the most today,” Korda said, also using it on the 1st.

Muirfield is a gigantic thinking fest with that constant, nagging wind. And in the moments of windy doubt, like Korda’s poor approach into the 13th, its bunkers seem to jump out in the way of your ball. That 13th tee ball fell weak, short and to the right, leaving a crude lie against the back of the bunker, on a downslope no less, 15 yards from the hole. She found herself in a very similar lie just two holes later, greenside on the 15th, about the same distance. Twice, in a half hour, Korda faced that wrenching thought: can I hit this without catching the back lip and crushing my wrist? She did so each time, skillful splashes to five feet.

And you know what? She missed both par putts. Muirfield strikes again.

“I was actually impressed with myself, little pat on the back after those,” she said, literally tapping herself on the top of her shoulder, mid Q&A.

Many Open champions have made lasting memories out of the small victories.