Tiger Woods’ unexpected WD echoes the past, warns of the future 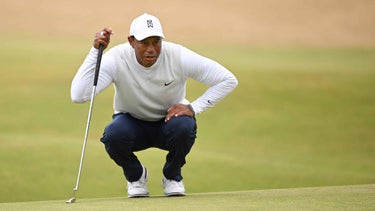 Tiger Woods’ Hero World Challenge WD was a reminder of just how many people depend on the 15-time major champ to play top-tier golf.

Tiger Woods’ Hero World Challenge WD was a reminder of just how many people depend on the 15-time major champ to play top-tier golf.

NASSAU, Bahamas — Wait a minute. That’s not how this was supposed to go.

This week in the Bahamas was supposed to be the beginning of Tiger Woods’ next chapter as a golfer. There have been plenty of chapters, of course. And plenty of beginnings. But the announcement that came Monday afternoon — that Woods was a WD from his own tournament due to plantar fasciitis — was decidedly not part of the plan.

This was supposed to be the beginning of a Very Merry Tiger Season. Our expectations were actually relatively modest: If all went well this week, Woods would show some promise on the course, walk 72 holes without issue and beat at last a few of his 19 competitors. He would look healthier than in his most recent appearance at St. Andrews, suggesting progress. Excitement would mount as to his next 72-hole appearance. Would it come at Riviera? Sawgrass? Augusta?

This was also supposed to mark the beginning of three events in three weeks headlined by Woods. The Hero, the Match and the PNC Championship are hardly major championships, but Woods creates his own interest. The significance of the event follows the player, in this case, rather than the other way around. Woods is all-in on the TGL, too, a new tech-based golf league that will kick off on Monday nights in 2024. Even in the hours after Woods’ WD announcement, Woods welcomed Jon Rahm and Justin Thomas as competitors.

Taken all together, Woods’ buy-in to these events means one thing: He has been leaning into a leadership role on the PGA Tour. These are all add-ons. They’re supplements. But they’re designed to draw in a different audience than week-in, week-out PGA Tour events while rewarding those same players. They’re designed to grow the pie for the needle-movers who remain in the Tour establishment’s ecosystem, part of its pitch to keep pros home as opposed to defecting to LIV. Woods’ embrace of the Match — originally Phil Mickelson’s baby — shows he’s here to defend the wall. In his WD statement, Woods said he still intends to play both the Match and the PNC. Here’s hoping that’s true.

There’s an element of time-as-flat-circle to all of this. Woods has staged several comebacks at the Hero World Challenge; some have gone well and others have not.

In 2016 he returned to competitive golf at Albany after more than a year away and showed plenty of game, injecting hope into the crowd. It would prove to be false hope; he would play just three competitive rounds in the next 12 months and mull the end of his career.

In 2017, on the other hand, Woods’ promising ninth-place finish at the Hero proved to be the beginning of a second act that would include three wins in the two years that would follow, a particularly memorable Masters title among them. Last year Woods again made his public reappearance at the Hero, some nine months post-car crash; he wasn’t playing that week but suggested he would play again at some point. He made good on that promise just a couple weeks later in a near-win at the PNC Championship and again several months later in an inspiring made cut at the Masters. In other words, we can get lulled into the familiarity of this cycle: Woods makes a lot of comebacks. Sometimes they work, sometimes they don’t. There will be more in the future.

But there are other obvious reminders that things have changed in ways that won’t be walked back. Last year Woods tossed the football on the Albany range with Bryson DeChambeau, now banned from the event due to his LIV defection. The event’s 2020 champion, Henrik Stenson, has departed for the same destination. So, too, has Patrick Reed, whose 2020 waste-bunker incident brought controversy to an otherwise chummy get-together.

Also gone is Slugger White, who ruled on that two-stroke penalty. His familiar figure will be absent from the Baha Mar, host hotel for a mix of players, staffers, fans and media. The Baha Mar has some construction going on in its recreation area: they appear to be putting in pickleball courts. Everybody is trying to adapt to a shifting world.

There’s also something horribly ordinary about Woods getting taken down by the scourge of plantar fasciitis. Woods’ injuries have, in the past, been dramatic and horrific. Broken legs. Torn ACLs. Debilitating back pain. A shattered foot from a terrifying car crash. But plantar fasciitis? Any 45-something who spends time on their feet could be in the same situation. I’m sure that doesn’t make it hurt any less.

But now we’ve gone and gotten carried away. Another way of looking at this is as a big bunch of nothing. Woods is smart to WD from a meaningless event. In the long run, you don’t do well betting against Alabama nor counting out Tiger Woods. And, to be clear, just because this week hasn’t gone according to plan doesn’t mean any of the rest of it won’t come true. Woods may get enough rest that he can play next week’s Match and the PNC the week after that. Both those events permit golf carts. They’re one and two rounds, respectively. And while Woods would have desperately wanted to play this event, where he serves as host, he may have been more reluctant to skip either of the others. The Match hinges on his presence. And at the PNC, Woods’ son Charlie is depending on him to play.

But his WD also a reminder just how fragile all of this is. The future of professional golf’s establishment lies on the shoulders, and back, and knees, and feet of a beat-up 46-year-old. There are more entities than ever that demand his time and energy and celebrity and influence, but all of those add-ons are based around one thing — Woods’ ability to play 72 holes of stroke-play golf with the best of ’em — that is no longer a guarantee.

Woods’ next beginning won’t come at this year’s Hero World Challenge. It may come next week instead. The PGA Tour and its fans will be holding their collective breath, even as they know they shouldn’t.