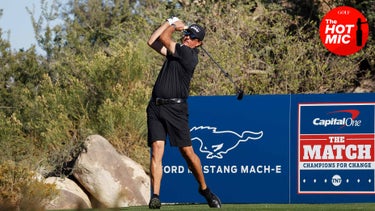 Tiger Woods and his son Charlie will play next month’s PNC Championship, capping off three events in three weeks for Woods.

Tiger Woods and his son Charlie will play next month’s PNC Championship, capping off three events in three weeks for Woods.

We haven’t seen much of Tiger Woods the last few months.

Sure, there was his enthusiastic appearance at Arthur Ashe Stadium, where he roared from the stands as Serena Williams won her U.S. Open match.

There were also photos and videos that emerged on social media from Woods serving as caddie for his son Charlie several weeks ago in Louisiana. The younger Woods was competing in the Notah Begay III Boys Junior Golf National Championship, where he finished 11th at one under par.

And, if you go back to the PGA Tour season, there were the paparazzi-style shots of a flannel-shirted Woods getting into a rental Nissan (!) en route to the Delaware Compromise, or whatever we’re calling the meeting of top PGA Tour players at this summer’s BMW Championship, where most top pros agreed on changes to be made to the schedule for the 2022-23 season and beyond.

Still, we haven’t seen Woods playing competitive golf since he made the walk up the 18th hole at St. Andrews’ Old Course, where he missed the Open Championship cut in July.

That’s about to change.

On Friday the PNC Championship announced that Woods and his 13-year-old son Charlie had officially committed to the field. This will mark the third consecutive appearance for Team Woods, who finished solo second last year behind John Daly and his son, John Daly II.

“We have been looking forward to this week all year and we can’t wait to team up together for our third PNC Championship,” Woods said in the release. “This is such a special opportunity as a dad to get to compete with my son against so many golfing greats and their family members. It is going to be a very special week and I know that Charlie and I will have a blast.”

Executive chairman of the tournament Alastair Johnston added his excitement.

“Everyone has seen Tiger do things on the golf course that only a few people can relate to, but here at the PNC Championship in the last couple of years, we have seen a partnership evolve between a dad and his son to which thousands can relate,” he said in the release. “We are delighted that because of golf, we can share that experience.”

The announcement also gave shape to the rest of Woods’ 2022, confirming that, after more than four months away from competitive golf, Woods will now tee it up three times in three weeks.

As he has several times over the years, Woods will begin his next comeback at Albany in the Bahamas. It’s friendly territory; Woods is the tournament host, there’s no cut, there are only 20 players, spectators are limited and it’s about as controlled an environment as you could imagine.

This is the only 72-hole stroke-play event on Woods’ confirmed calendar, which means it will be our best chance to gauge where his game and his health currently stand. We’ll hear from Woods, too — this is where he’ll address the media for the first time since St. Andrews. This will be a status update as much as anything; since the Hero is still five months from the Masters, it’s a bit early for prognostication.

The latest edition of the Match will pit Woods and Rory McIlroy against Justin Thomas and Jordan Spieth. Their presence alone makes it worth watching for golf fans, but it’s notable for a few other reasons:

-It’s on a Saturday evening under the lights during what is — besides Army-Navy — a football-free day. Smart scheduling by Match organizers.

-Executive producer Bryan Zuriff teased that even as Phil Mickelson is no longer involved, this year’s Match will include some off-course insight from some of the PGA Tour’s biggest names.

“You’re really gonna get a chance to hear what these guys have to think about everything that’s happened in the last year,” he told GOLF’s James Colgan.

This may be the event where Tiger Woods finally takes a backseat to somebody else in the field: his son Charlie.

Team Woods has drawn innumerable eyeballs to the PNC broadcast the last couple years. We’ll run it back again this year, the golf world trying to balance its collective excitement at their pairing, curiosity at Charlie’s golf game and delight seeing father and son together with the fact that he’s 13 years old and should be allowed to do his thing without the insane expectations that come with being the GOAT’s son.

Mostly, though, the PNC is good fun. It’s a chance for Tiger and Charlie to chop it up with Lee Trevino and Justin Thomas and Nelly Korda and more than a dozen other legends of the sport in a (relatively) low-pressure environment. The field (below) makes it well worth watching, whether or not Team Woods contends for the title.