Tiger Woods, for a while this weekend, looked like *that* Tiger Woods. So … 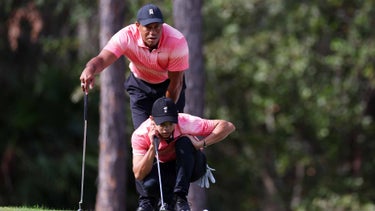 Tiger Woods provided a glimmer of hope for the future at the PNC Championship, as a tumultuous 2022 season closed. More than a few people noticed.

Tiger Woods provided a glimmer of hope for the future at the PNC Championship, as a tumultuous 2022 season closed. More than a few people noticed.

ORLANDO, Fla. — You did not have to look hard at the PNC Championship to find someone willing to make the argument against Tiger Woods.

For much of the week, Woods himself was among the willing participants.

“It’s what I’ve been saying,” he said on Saturday evening, his voice pitched with frustration. “I can hit the golf ball. I just have a tougher time getting from Point A to Point B.”

Those who entered Orlando with questions about Woods’ stamina left with them largely unanswered. Getting around is easier at the PNC, where Champions Tour rules allowed Woods to use a cart for the week. But for a few significant stretches of time during the 36-hole, two-day scramble, it sure seemed he needed it.

On the 7th tee on Sunday, Woods lifted his pants leg to reveal his right calf — the one that was severely injured in a car crash some 22 months ago — wrapped neatly in a compression sleeve. For the five or so minutes that followed, Woods pushed himself through a stretching routine with the same excitement one approaches a root canal, grimacing as he slowly lifted and lowered the leg. When it finally came time to swing, Woods limped to the tee box and hit a high, weak flare that drifted into the trees.

Woods’ ability to walk 72 holes, of course, remains paramount to his chances of ever winning again. And Woods’ current inability to walk even short distances — exacerbated by a nasty bout of plantar fasciitis — certainly isn’t helping that pursuit. The fact remains: Woods is not healthy, and he has not been in a very long time. He may never be fully healthy again, which could render this latest comeback attempt all but impossible.

On the 10th on Sunday, Woods’ caddie, Joe LaCava, inadvertently distilled the whole of the argument against his employer into six words.

“Does he need to hit one?” LaCava asked. It’s an option in this player-relative scramble — and the implied meaning was known. Woods’ manager and friend, Rob McNamara, answered in the affirmative. LaCava shrugged and pulled 3-wood.

But then Woods swung his 3-wood, and the argument against him came crashing down. He mashed his tee shot, a high, gentle draw that carried some 300 yards down the center of the fairway. From the fairway, he nipped a clean wedge to 6 feet. Up at the green, son Charlie’s birdie putt hit the middle of the middle.

Charlie fist-pumped, Tiger nodded knowingly and the crowd erupted, their sudden belief audible from the tee box. Maybe the good old days weren’t that far off.

Tiger’s return did not come in full at the PNC, where he and Charlie finished an underwhelming T8 on Sunday afternoon. But that wasn’t enough to keep the excitement from bubbling over among those closest to the elder Woods at the Ritz-Carlton Golf Club this weekend.

“I was impressed by a lot of things this week. Nothing impressed me more than how well he played,” said Jim “Bones” Mackay, who caddied for Woods’ playing partner, Justin Thomas, during both weekend rounds. “How he compressed the ball. He was doing what Tiger Woods did.”

Mackay was not alone in his surprise. Even young Charlie was a teenager’s version of effusive in his praise of Dad.

“I feel like I already knew what he was capable of, and then [Saturday], that’s the best he’s ever played in a while,” he said. “That kind of shocked me a little bit.”

That might be underselling it. Mackay spent the afternoon watching Woods’ drives carry past Thomas’, his irons spin in whichever direction he deemed fit, and his putts fall from everywhere around the green. For Mackay, Woods’ performance at the PNC was nothing shy of vintage — and it’s been quite a while since he’s been able to say that.

“He made 30-footers. Guys make 30-footers. But his ball was hitting center-cup with speed for a while yesterday,” Mackay said. “I was out there thinking, oh my gosh, it’s a Ryder Cup year.”

Of course, Mackay knows as well as anyone that Woods hasn’t finished a tournament under par in more than two years. His body has allowed him to finish only one 72-hole tournament in that time — a T47 finish at the Masters. But then again, this is how things have always been around Woods. He is golf’s great Rorschach Test. You see the things you wish to see, and ignore the ones you don’t.

Over these past two years, it has been hard to see anything other than pain from Tiger. But this weekend in Orlando, the pain gave way to something else — a glimmer, however small, of hope.

As the evening sun began its final descent on Sunday, Tiger Woods addressed the media for the final time in 2022. It has been a strange year for him, one that has seen his game and body falter, his status rise and his hope waver. On Sunday at the PNC, it seemed those closest to Woods were split on what comes next. Perhaps that’s because he was too.

“Well, it was a tough year but also one of the more rewarding years I’ve had in a while,” he said. “I’ve had a lot of setbacks over the last few years.”

Is Tiger Woods on the brink of another comeback? As per usual, it depends on who’s answering.