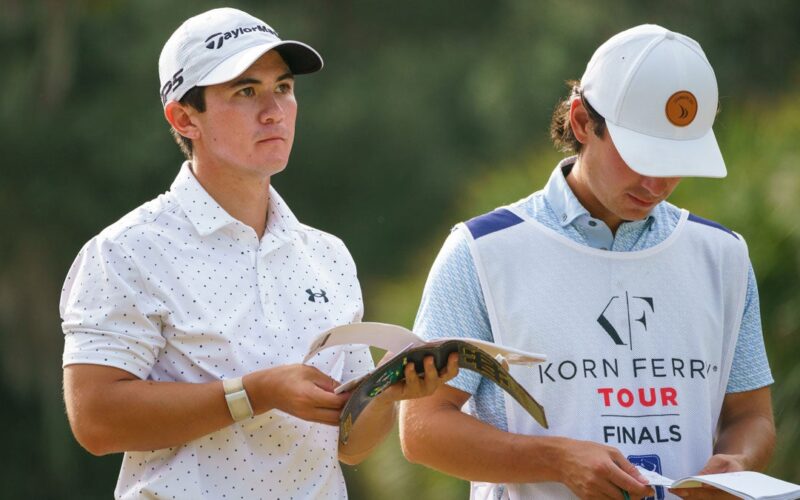 From Tiger looping for his son this week to Justin Thomas’ wedding and a PGA Tour meal train, get caught up.

From Tiger looping for his son this week to Justin Thomas’ wedding and a PGA Tour meal train, get caught up.

Hello, friends, and welcome to the latest and greatest issue of the Rogers Report. This one involves some Tiger updates, which are always a thrill to bring your way. Russell Henley won (arguably?) the coolest trophy in golf on Sunday, Bernhard Langer continued to give Father Time a run for his money and Gemma Dryburgh became the first woman from Scotland to win on the LPGA Tour since 2011.

We had a PGA Tour bachelorette party and a PGA Tour wedding this past weekend. But before we get into it, I’d like to take a moment to congratulate my dear pal Davis Chatfield (and his caddie/brother, Pat) for earning conditional status on the Korn Ferry Tour. He was just one of four players to get through pre-qualifying, first, second and final stage to earn full status.

The exact date of Collin Morikawa and Katherine Zhu’s wedding is still unknown to me but the festivities officially began over the weekend, when Kat and her friends headed to Miami for a beach-centric bachelorette party. We didn’t get too many social posts from the event but hey, I’ll take what I can get. Zhu and Morikawa got engaged in February, and most bachelor/bachelorette parties happen two to four months before the wedding. So my detective skills lead me to believe that the two will tie the knot sometime before Valentine’s Day. I promise to keep you all updated on that front.

When it comes to being present, there’s nothing better than a phone-free wedding. When it comes to my social media sleuthing, on the other hand, there’s nothing worse than a phone-free wedding. Jordan Spieth did it. Rickie Fowler did it. It totally makes sense for these guys to want a private wedding and I completely respect it. On the other hand, Paulina Gretzky and Jena Sims made me feel like I was part of the wedding party as I lived vicariously through their social posts. Worry not, though. There’s no event that I can’t find content from; the discovery process just takes longer for some than others.

Here’s what we know about the event: It was in Franklin, Tennessee. (Thank you to Smylie Kaufman for tagging the location on Instagram.) Jordan Spieth was JT’s best man. Cute! And while I will take a moment to point out the fact that JT was not Spieth’s best man, I think that’s because Spieth has a brother and Thomas is an only child.

I’d love to know what Spieth talked about in his speech. He probably referenced their junior golf days, their Ryder Cup partnership and, in my imagination, dropped a handful of anecdotes that would break the internet if we could only get our hands on ’em.

With JT at the altar, Spieth by his side and Kaufman in attendance, it’s only fair for me to infer that the fourth member of the spring break crew, Rickie Fowler, was also there.

Alexandra O’Laughlin was there with her husband and JT’s old scoring coach, Matt Killen. Country music singer Morgan Wallen was also in attendance.

Scroll through her post to check out Killen’s particularly bold choice in suit.

The Thomases have not shared any of their own photos from the wedding (yet), but Jillian did change her last name on Instagram. Have we gone too far? Maybe we’ve gone too far. But since this is a public service, I’m here to share what I know.

Move over, Joe LaCava. There’s a new sheriff (head caddie) in town. Charlie Woods once again has the best looper of all time this week at the Notah Begay III Junior Golf National Championship.

I can’t help but wonder if all caddies were allowed to take carts or if Eldrick was an exception. Either way, it is wild to see the 15-time major champion rocking a caddie bib. Imagine if LeBron started refereeing his son’s games? Or Tom Brady coached a 12-and-under football team in Tampa?

Tiger caught up with his Stanford teammates, Notah Begay and Will Yanagisawa, at the event.

Check out this photo of them from the archives (1995).

Admittedly, I know next to nothing about the golf swing. But to this 15-handicapper’s eye, Charlie’s move looks pretty good!

Max and Lacey Homa welcomed their first child last week and had a nice surprise waiting for them when they returned home from the hospital.

Not only did the Schefflers and the Burnses send flowers, but Jon and Kelley Rahm took it upon themselves to set up a food train for the Homas. How great is that?

You absolutely love to see PGA Tour competitors taking care of each other off the course.