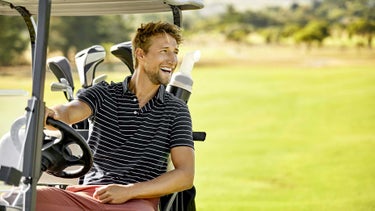 Here, on Christmas, are 22 golf wishes, including ones for Tiger Woods, LIV Golf, an angry partner and four High Life drinkers.

Here, on Christmas, are 22 golf wishes, including ones for Tiger Woods, LIV Golf, an angry partner and four High Life drinkers.

He first offered me seven figures. Then he started getting colorful in his English, though his words were only four letters long.

He was running hot, and it was at least somewhat understandable. A few weeks back, I was extending the Northeast golf calendar with a December afternoon solo round, and so was our man, and after six holes, we joined together. But now, we waited. The group in front of us on this short par-4 had parked their cart about 30 yards short of the green, and it was reachable from the tee.

Earlier this year, I had learned my lesson: I hadn’t waited, it got weird, and I wrote about that here. But our guy paused.

“I’ll give you a million dollars if you hit that cart.”

Whoaaaa. But I still waited. Then topped one. We all saw that coming. Unfortunately, the slow play continued. And at the 8th tee, where the group hadn’t hit yet, my new playing partner detonated and the F-bombs came.

And one hole later, he was done.

Happy holidays, right? So let’s begin this list of 22 Christmas golf wishes with him. We’ll touch on a few more folks and topics, but he should open his gift first.

Here are 21 more thoughts. (And a tip of the cap to Tom Shatel, the longtime columnist at the Omaha World-Herald, who runs a similar piece each year. Thanks for the inspiration, Tom!)

2.  Let’s stay with my round for a sec. And offer a wish to that group in front of me.

A few holes after the angry golfer exited, I caught up with them. They asked if I wanted to play through. But there was more.

Another man: “It’s just golf. And it’s December and we’re not working! Can’t beat it. Chill out!”

Another man: “Want to play with us? We’re just going to hang back and have a beer and a sandwich quick.”

The fourth: “Want to play with us? Want a beer?”

I laughed and politely turned down the High Life, and we went our own ways. But I loved that. That’s golf.

So guys, keep doing you.

3. For Tiger Woods, your wish is not a good right leg, or a back, or a replacement for whatever else, but it’s more of what we’ve seen this past year. He’ll likely never be an open book, but as the years pass, and he plays less, regardless of any injury, this is the role he’ll have. The voice. Let’s hope he continues to embrace it. (Stocking stuffer: A Masters run. Why not?) .

5. For LIV Golf, if golf is the force for good that your CEO says it is, then be that. Do something better than offer a few press conference words against the group that signs your very large checks. You have leverage. Use it. Just maybe more folks will watch then.

6. For those upset with the OWGR, a weekly voting panel. That seems to be what you want. Though, please check in with college football to see how that’s working out for them.

7. For the upcoming Netflix golf series, a not-so-aggressive editor. We want to see everything.

8. For Max Homa and Joel Dahmen who others who enjoy Twitter dot com, let’s hope that your site sticks around and you keep tweeting about bad swings and each other and whatever else. (Stocking stuffer: For Patrick Reed, let’s hope Elon pulls the plug and you don’t have to read folks’ opinions anymore.)

9. For the PGA Tour’s upcoming elevated events, value to the viewer. What does that mean? Let Harry Higgs explain.

“And there’s a lot of people in this world that once they turn the television on and watch Rory McIlroy win a golf tournament, I get that,” Higgs said on a recent episode of the No Laying Up podcast. “He’s being compensated lavishly because of that. And he has worked his a** off to be in that position, in a lot of different respects, both on and off the golf course. And I revere him for that. But that s**t’s going to get really old watching that five, six, seven years in a row. Like if you can’t integrate the story, where it might be somebody that’s ranked 90th going toe-to-toe with him, that is going to be a little bit more polarizing, at least in my opinion, than it is the constant Rory versus Justin Thomas, let’s see who wins, let’s see who can drive it in the fairway one more and hole one more 15-footer. ‘OK, all right, it was Rory that week. OK, it was Jordan that week, all right. It was Jon Rahm this week, all right. Ooh, ooh, look, it was Shane Lowry. OK, that’s kind of cool, he’s got a little bit of personality. But then Shane goes and finishes fourth the next three weeks and no one hears from him.’”

10. For the PGA Tour’s non-elevated events, value, period. Do they have a spot in the ecosystem? (Everyone’s been using that last word a whole bunch recently, aren’t they? Fancy sounding. I’ll do it, too.)

11. For the Masters, a statement to LIV Golf. Multiple golf tours can exist, but this goes deeper than that. You can go back and re-read wish No. 5, if you like.

12. For the PGA Championship at Oak Hill, some 70-degree days. Rochester in mid-May can be element-y. (Stocking stuffer: Mito Pereira gets another crack at the Wanamaker.)

13. For the USGA, keep dropping by courses like L.A. Country Club, as you are in 2023. And it’ll all be in prime time. Outstanding.

15. For the European Ryder Cup fans, everything. Nothing is off limits. We missed you in 2021.

16. For the Chevron Championship and its new home in Houston, your own traditions. And a proper nod to the classic you’re replacing, the Dinah Shore.

17. For the U.S. Women’s Open at Pebble Beach, the audience this thing deserves. Is this the event of the year? Maybe. (Stocking stuffer: 18th-hole drama. A ball in the tree? A ball in the ocean? Yes, please.)

20. For golf, more Steven Alker. This was one of my favorite interviews of the year, from one of the best stories of the year.

21. For the woman player we’ll describe below, less stupidity in the groups behind you.

As noted in wish No. 1, I wrote earlier this year about an ‘incident’ I had at a course — then made a call for readers’ dust-ups. And this submission was the best thing I read all year.

My story is a little different, as the confrontation was elicited by me and my playing partner waiting until the group in front of us was out of range.

We are both women and single-digit handicappers. No. 3 is a par-5, and after hitting our drives, we were waiting for the group in front of us to exit the green, as we were both capable of hitting it in two, when the two guys behind us roared up in their cart, and one of the fellows began yelling at us, claiming that it was just like women to be talking and not paying attention instead of hitting. I calmly explained that we were waiting because we could reach the green and did not want to endanger anyone. He continued to scream that we should hit or let them through.

Well, that ticked me off, so I said to him, “Here is what we will do: You get out your wood and I’ll get out mine  and whoever hits it the farthest gets to go, and I’m hitting first.” I pulled out my 4-wood, hit it solid and landed the ball in the middle of the green. Before I could turn around to clear for him to hit, he was back in his cart, pulling away, and as he did so, his playing partner was telling him, “Don’t ever embarrass me like that again!” Needless to say, we did not see them behind us for the rest of the round.

This is just one of many circumstances I have found myself in over the years, as some men just make unfounded assumptions about women golfers.

22. For you, the golfer and the golf reader, cutting out at noon on Friday and playing until the sun sets. And a brat at the turn. And a win in the Masters ticket lottery. And a fall golf trip. The good stuff.

23. Bonus! For me, more Jedi-like control. Like below, during one of the most exciting moments of the year. Or maybe at least a smile. Come on, man.