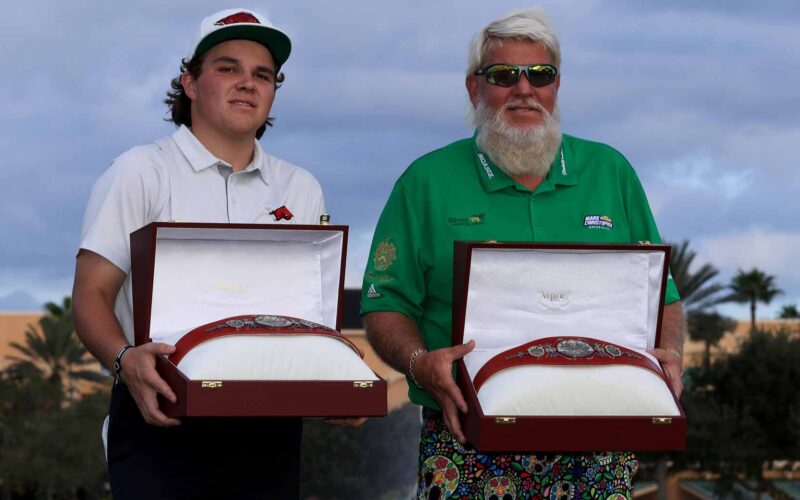 On Friday the PNC Championship announced an exciting commitment: Tiger Woods and his son Charlie are returning to play their third consecutive edition of the event. Team Woods will join 19 other teams at the Ritz-Carlton in Orlando for the third weekend in December.

While there will be plenty of attention paid to Tiger and Charlie, the rest of the field is plenty interesting, too. The 20 teams have won a combined 73 major championships dating back to 1959 and as recently as this season, and to qualify for the event a pro must have either won a major or a Players Championship (see: Matt Kuchar). Their partners must not hold a PGA or LPGA Tour card.

Justin Thomas and his father Mike will return two years after winning their debut, Nelly Korda and her father Petr will return after their debut last year and Jordan Spieth will make his first start alongside his father Shawn, too.

Here are a few notable teams — followed by the complete field.

The defending champions are coming back for more. John Daly and John Daly II posted scores of 60-57 in the two-man scramble format last season, finishing at 27 under par and beating Team Woods by two.

Daly II is in his sophomore season at the University of Arkansas, where he is on the golf team. He played in one event as a first-year, shooting 83-68-78 at the Blessings Collegiate Invitational last October. John Daly, Sr. has said his son is redshirting this season, given the number of seniors on the team, and that he’s “not a hurry to play.” Daly II also finished third in the Florida Amateur this summer.

Together, they set the PNC scoring record at 27 under par. And while Daly II has asked for a showdown directly with Team Woods, we’ll get the next best thing in Orlando.

Justin Thomas’ father Mike already doubles as his golf coach. Now he’ll be reprising his role as partner for the third season in a row. The pair won the event in their debut appearance in 2020 when they shot 62-57. Last year, despite Mike battling an ailing back, they posted 60-60 to finish T3 behind Team Daly and Team Woods.

Jordan Spieth and his father Shawn will be making their tournament debut. And while Shawn keeps a relatively low profile behind the scenes, he had an impressive athletic career of his own, playing basketball and baseball in high school and going on to play first base at Lehigh in college.

More recently he appears to have been working on his golf game; a name that appears to match Shawn’s is listed as a 3.2 handicap and has posted consecutive scores of 76 on GHIN this month.

“We have been wanting to be a part of it for some time, and this year the schedules aligned,” Spieth said in a PNC announcement. “I’m sure leading up to it we will have quite the back and forth, but even though we are taking it seriously it’s really going to be a lot of fun to have him out there.”

Shawn has filled in at caddie a couple times on Tour; his appearances included a stint at Pebble Beach and a caddying no-no, too.

Nelly Korda just wrapped up her LPGA Tour season at last week’s CME Group Tour Championship. Korda described it as a “rollercoaster year;” she missed several months with a blood clot in her arm but rebounded with a victory at the Pelican Women’s Championship and fought back to reclaim the title of World No. 1 to finish the season.

Korda’s father Petr was a professional tennis player whose career included a major title of his own at the 1998 Australian Open. He started paying attention to golf around the same time and remembers having particular admiration for John Daly and Tiger Woods. Now they’re all in the same field for the second consecutive year.

“We absolutely loved our experience last year and are delighted to have been invited again this year,” Nelly said in a release. “It was such a fun week for the whole family! It truly was special for my dad and me to compete inside the ropes together. We are definitely looking to improve on our 12th place finish last year and I can’t wait to share this amazing experience with him again.”

And then there’s Team Woods. Last year the duo surpassed all expectations by contending, which was particularly impressive — and surprising — given it was Woods’ first event since his horrifying car crash ten months earlier. They also set a tournament record with 11 consecutive birdies on Sunday en route to a 15-under 57 and a solo second place finish.

“We have been looking forward to this week all year and we can’t wait to team up together for our third PNC Championship,” Woods said in this year’s announcement. “This is such a special opportunity as a dad to get to compete with my son against so many golfing greats and their family members. It is going to be a very special week and I know that Charlie and I will have a blast.”

You can see the rest of the star-studded field below: