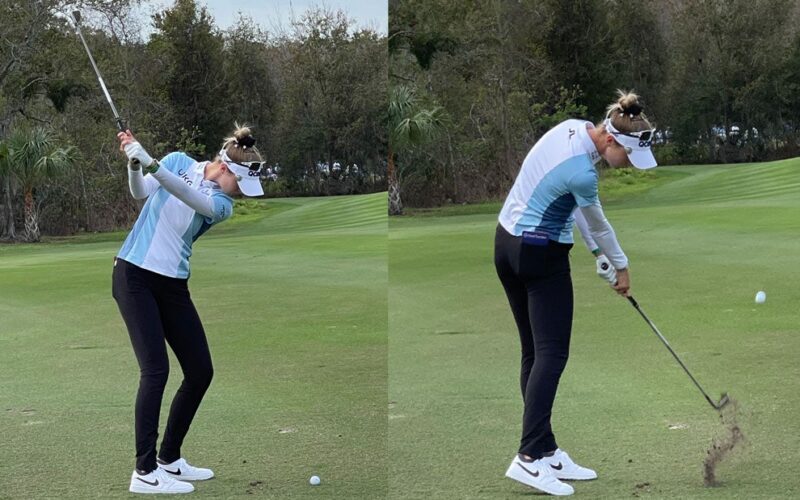 From the Dalys’ tee-time confusion to Tiger locking into dad mode, get caught up on Saturday at the PNC Championship.

From the Dalys’ tee-time confusion to Tiger locking into dad mode, get caught up on Saturday at the PNC Championship.

Hello friends and happy Saturday evening from Bartaco Orlando, where James Colgan and I are hard at work over some chips and guacamole. Not to sound like a broken record, but I once again had a dream day at the Ritz-Carlton Golf Club. Before I take you through it, I’d like to draw your attention to this photo of the Daly and Woods boys.

Talk about getting into the holiday spirit!

My day started on the driving range, where John Daly was hitting balls with one hand on the club, making the type of contact I’ve never made with two.

When I asked Little John’s caddie their group’s tee time, he laughed and admitted that he wasn’t sure. Daly’s range session was extremely brief, as James Colgan explained here.

Talk about efficiency. All’s well that ends well, as they made their tee time. I wish I was as unbothered. I get to the airport three hours early, quadruple-check tee times once I see them and never let my gas tank hit empty. JD’s Saturday range session has inspired me to live life on the edge.

Tiger’s caddie, Joe LaCava, went right up to Daly on the range to give him a big hug. It’s safe to say the guy is well-liked out here.

Then Tiger and Charlie got to the range. Tiger was stretching and Charlie was fiddling with his shoes — he had a golf shoe on one foot and a sneaker on the other for most of his warm-up. A few minutes later, Justin Thomas‘ dad, Mike, joined the Woods boys on the range.

When JT made his way over, he joked with the media members and said, “How many of you guys are over here watching my dad warm up?”

Fifteen-time major champion this, 82-time PGA Tour winner that! Tiger Woods set the gold standard for co-parenting when he requested a moment on television to congratulate his ex-wife, Elin, on the birth of her child. As a proud child of divorce myself, I’d call that a huge win.

Don’t let the tender moment fool you, though. It didn’t take long for the trash talk between JT and the Woodses to begin.

I decided to follow the Spieths and Kordas around for their first few holes today, and they did not disappoint. Michael Greller might not be on Spieth’s bag this week, but between Jordan, his brother, Steven, and his father, Shawn, there are still plenty of pre-shot discussions. I was most surprised by how well Shawn Spieth and Petr Korda played. It can’t be easy to show up and play a televised round of golf alongside your child, particularly when your child also happens to be one of the best players in the world. My anxiety levels would max out long before the first tee, but Shawn and Petr didn’t show any nerves, if they had any at all. They made solid contact again and again off the tee.

Then I popped over to check in on the oldest group on the course: 83-year-old Lee Trevino and 87-year-old Gary Player. There weren’t many people following them at this point, but Trevino made sure to call out anyone who was looking at their phone instead of the golf.

“What are you even looking at on that thing?” he asked one woman, who admitted she was playing Candy Crush. “I don’t even have an iPhone. I still use one of those flip phones, and I’ll never get rid of it,” Trevino bragged.

That comment made me nervous to have my phone out, but I snapped these photos (for you, my dear readers) before returning my device to the safety of my pocket. Then I made my way back to the media center for a quick lunch (I’ve rediscovered Fritos this week) before Team Woods and Team Thomas reached the back nine.

My absolute favorite spot on the course this week is the little pathway between the ninth green and the tenth tee. It’s a private area of the course, away from fans, where the players get their lunch and hang out in their carts. There’s usually a backup there, too, so groups will spend upwards of 10 minutes waiting. In other words, it’s a great spot to observe these guys in their natural habitat.

Matt Kuchar was in full-on dad mode as he waited to tee off. “You want an apple, or can you not have that because of your braces?” he asked his son before giving his other son advice on where to place a golf bag. The good news is that chicken tenders and fries are braces-friendly.

On to Tiger and Charlie. These two were very clearly hurting today. Limping, grabbing limbs, you name it.

It’s why I’ve coined this PNC Championship the Woods’ very own “flu game.” And if they get it done on Sunday, it’ll be even more impressive knowing they did it with bodies that weren’t working their best. Even though Tiger was limping, he and JT kept each other laughing all day long.

Thomas even hopped on the back of Tiger’s cart a few times throughout the day. Shout out to JT’s mom Jani, who is caddying for her husband Mike this week. I’ve caddied a handful of times and it usually ended in tears (read: clubs left behind, blisters and a bruised ego).

As I walked down No. 12, a pal offered me the Ritz-Carlton clubhouse chicken tenders. I’m not an official food rater (I stick to what I know best: ice cream), but I will say these were some of the best I’ve had.

Not only was JT joking around with Tiger and Charlie, but he poked fun at Tiger’s right-hand man, Rob McNamara as well.

My favorite part of the day was after the group signed their scorecards. Tiger met up with his daughter, Sam, and her friends. His “pro golfer” mode vanished before my eyes and he turned into “Sam’s cool dad.” Cool not only because he’s Tiger Woods, but also because he approached them with a sense of excitement and humor that only a parent who really knows their kid and her best pals could.

Then came their presser, where Tiger inserted some deprecating humor. My favorite.

I’ll leave you all with this photo of me working today. I’m behind the guy in the front.