This year’s Tiger Woods comeback was nothing like the others 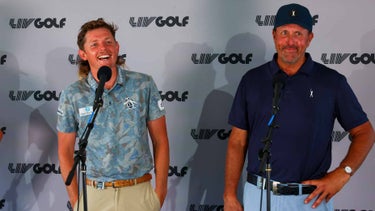 Our expectations for Tiger Woods have always been overinflated. But at this year’s Masters, Woods did something we didn’t expect.

Our expectations for Tiger Woods have always been overinflated. But at this year’s Masters, Woods did something we didn’t expect.

Remember when we thought a pandemic season two years ago was crazy? Man, 2022 had it all. The return of Tiger Woods, the founding of a controversial golf league, the disappearance (and reappearance) of one of golf’s most beloved figures and so much more. But now let’s take a breath. Here, we’ll look back (and look ahead) at the 10 most memorable moments of 2022.

No. 10: Nelly Korda’s rollercoaster year ended with promise for 2023
No. 9: How Tom Kim stole the show at the Presidents Cup
No. 8: How Lydia Ko rediscovered her game in 2022
No. 7: Rory McIlroy was an absolute force
No. 6: Scottie Scheffler is a major champ
No. 5: Cam Smith’s breakout (and tumultuous) year
No. 4: What happened to Phil Mickelson?

No. 3: This year’s Tiger Woods comeback was nothing like the others

It’s easy to look back at the totality of Tiger Woods’ 2022 golfing calendar and see it as a lost year.

It ended the way 2021 ended, after all: Woods wasn’t healthy enough to tee it up at the Hero World Challenge but did manage to tee it up with the aid of a cart in a feel-good season finale at the PNC Championship.

There were plenty of disappointments. Woods didn’t tee it up in any PGA Tour events outside of the majors. He missed the U.S. Open altogether. And the event he saw as his best chance to contend — the Open at St. Andrews — began with his ball in a divot and ended with an emotional missed cut.

It’s easy to forget now, but going into the Masters it still felt like a long shot that he’d be able to play the event. Woods has spent nearly a decade and a half in a cycle of disappearances and comebacks, so we’re used to endless speculation about his tournament starts. But this setback — a horrific car crash some 14 months before in which he’d shattered his foot — had left an uncertain road to recovery. Our expectations for Woods have always been overinflated, but in the lead-up to Augusta, for the first time in his career, it felt as though anything we got from Woods on a golf course ever again would be pure bonus.

It wasn’t until the week before the tournament, when Woods made a scouting mission to test out his ability to walk Augusta, that fans grew cautiously optimistic. It’s a better Masters with Woods in the field, after all. And while he didn’t win the tournament, he inspired in different ways. It was still one of the moments of the year.

Below you’ll find the story I wrote from the end of Woods’ week, urging us to appreciate the moment before we moved on to all the rest — including his charge at the cut line at the PGA and that magical walk at St. Andrews. And while there are reasons to be optimistic for his 2023 (Ball speed is up! Plantar fasciitis is beatable! He’s making moves behind the scenes!) it feels like a good time of year to reflect on that moment one more time:

AUGUSTA, Ga. — Before the breathless speculation about what’s next, before we see if his jet is stopping for practice rounds in Tulsa, before we start mapping out his path to victory at St. Andrews, let’s take a moment to appreciate what Tiger Woods did this week at Augusta National.

How do you measure this Masters for Woods? The numbers that explain his result are inadequate in telling its story. Solo 47th. A career-highest 13 over par. Back-to-back 78s on the weekend. One number comes closer — his 22nd consecutive made cut at Augusta — but still falls short. What did it mean to Woods himself, and to those around him, and to those of us watching along? That’s much tougher to quantify.

Woods limped down the 14th fairway on Sunday alongside playing partner Jon Rahm. He was canted slightly forward, the stride of a man with a fused back whose body is made partly of metal. He was using his driver as something of a hiking pole, helping to propel himself forward, in clear discomfort. He was already three over par for his round, 10 over par for the tournament. But still fighting.

Woods had a massive gallery in tow, including one particularly enthusiastic pocket of supporters on the rope line, all dressed in red and black. Tiger colors. They cheered loudly as Woods went by, the way a family might root on their father at a half-marathon. One of them asked her friends if she should deploy her loud whistle. She went for it. They cheered louder.

Woods’ daughter Sam and girlfriend Erica Herman were among that group. Tiger has stressed all week that only those closest to him could understand the extent of his fight back. Sam agreed.

“It’s miraculous,” she said of this week’s start. “It shouldn’t be happening.”

“I mean, nothing ever surprises me about him,” Herman said. “But he’d just worked so hard to be here, that was the one thing I knew: once he got here, he wasn’t going to go home.”

She used the same words that Woods has all week. Appreciative. Thankful.

“This feels like a home game for him,” she said. “This has been his home turf for so long. Everybody around the club knows him. They know us now, too.”

In the background, Woods faced down a 37-foot bogey putt. He took his time mulling it over. Every shot counts the same, even if you’re 20 off the lead. He poured it in. The crowd went wild.

Nearby, an athletic man in a crisp Augusta National polo took in the action. It was Bryson DeChambeau. He’d missed the cut but stuck around to watch Woods. This isn’t just rare; it never happens. Pros don’t watch other pros play golf. What was DeChambeau doing there? He shrugged.

“I came out to support the best ever,” he said. “It’s really cool — I don’t know how many chances I’ll get to do something like this.”

A hundred miles away at his home in Bluffton, S.C., Johnny Pruitt was trying to make sense of it all.

“I’ve got goosebumps just thinking about what he’s doing right now,” he said on Sunday afternoon as Woods finished up his final round.

When is comes to miracles at Augusta National, Pruitt is something of an expert. He was standing at Amen Corner in 2018 when his heart failed, sending him into major cardiac arrest. He turned blue. His heart stopped. By the time he got proper medical attention, he’d gone minutes without a pulse. To quote Pruitt himself: “I was very much not alive.”

Through exhaustive medical procedures and sheer force of will, Pruitt pulled through. The next year he was back at Augusta, walking carefully, celebrating the anniversary of his death. Woods was back, too, completing a miraculous comeback by winning his fifth green jacket. Pruitt has never met Woods, but he marks their progress together. He couldn’t believe that 2019 win. He couldn’t believe Woods came back this year, either.

“I don’t know what his dad taught him about mind over body but there’s something else there that would make you that passionate and that determined to do what he does,” Pruitt said. He gets emotional, talking about Woods. That’s one of Tiger’s hallmarks: He inspires emotion. “That’s the thing, right? He’s not in it for the money,” Pruit continued. “He doesn’t have to do this.”

After his round, Woods was self-deprecating about his performance but seemed to understand the gravity of his presence. He was already thinking big picture. He talked about how much the tournament has meant to his entire family. He talked about what it meant that he’d teed it up. He recognized his place in the tournament’s complex history.

“You go back to the year I was born, that was the year that the first black man played in the Masters, Lee Elder,” he said. “He was an honorary starter last year. He was there when I won in ’97. Twenty-five years later, here I am playing again.”

Asked about just how much he’d been through to get back to this point, Woods repeated a line we’ve heard throughout the week.

That marks an enormous difference for this version of Tiger Woods. He wants us to understand, even as he knows we can’t and won’t. He’s not taking this for granted. We shouldn’t, either.

Woods keeps teaching us lessons at Augusta National. The last time he played the Masters, he doomed his chances at a top finish when he made 10 at the par-3 12th. Instead of tapping out he went back to work and churned out five birdies in his final six holes, his best-ever finish to a round at Augusta.

He limped off the podium. He hugged his family. It was time to rest.

The speculation started before Woods left property. The PGA at Southern Hills is a maybe. Ditto for the U.S. Open at Brookline. Woods has the Open Championship at St. Andrews circled on his calendar. “I am looking forward to St. Andrews,” he told Sky Sports. “That is something that is near and dear to my heart. I’ve won two Opens there, it’s the home of golf, and it’s my favorite golf course in the world. So I will be there for that one.”

In time, all things. Woods made his way through the clubhouse, his mother beside him, his son in front of him, scores of diehard fans cheering even as he left their line of sight.

LaCava lingered for a moment, gazing out over the property and then back at the assembled media. He raised a hand.

Things won’t ever be the same. Not Woods’ body. Not his schedule. Not his golf game. He’ll be back nonetheless.