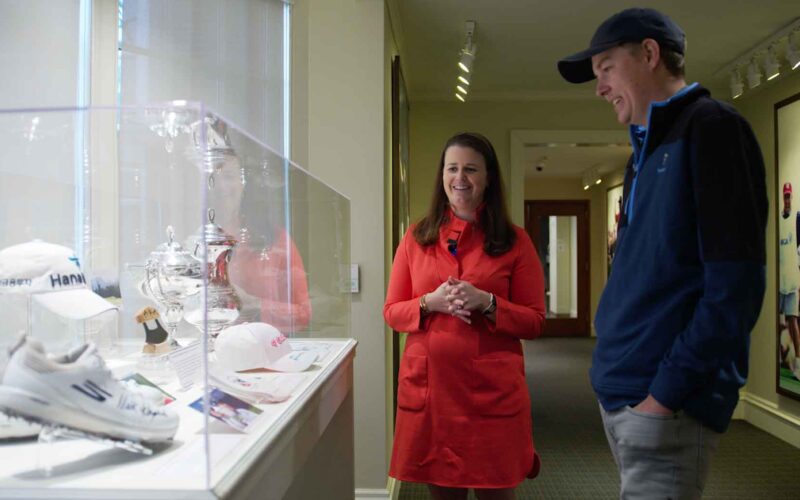 Spending your days surrounded by the history of golf is every bit as fun as it sounds. Just ask Hilary Cronheim of the USGA.

Spending your days surrounded by the history of golf is every bit as fun as it sounds. Just ask Hilary Cronheim of the USGA.

Before we get into the nitty gritty of this piece, let’s start with a thought exercise. If you were asked to connect a common thread between Happy Gilmore, Amelia Earhart and George W. Bush, would you be able to? It might seem like it’s unlikely that the three are connected in any meaningful way, but they’re, in fact, closely related.

That thread? The USGA Museum in Far Hills, N.J. Buried deep in its archives, among a robust collection of golf memorabilia and artifacts, sits Gilmore’s putter (yes, that putter), a set of Earhart’s head covers and a ball played by the former President.

“One of the reasons I have one of the coolest jobs is golf is that I get to oversee the world largest collection of memorabilia related to golf,” says Hilary Cronheim, the senior director of the USGA Museum and Library. “It’s such a privilege to tell people about the history of golf.”

Museum curator might not sound like the most riveting job title, but when you get to handle artifacts from some of the most iconic figures in U.S. golf history, the appeal is obvious.

Cronheim recently gave GOLF.com a tour of the collection (see video above), during which we got a behind-the-scenes look at the oldest museum in sports. The experience was eye-opening, not only because of the vast collection, but also because we got to see what it takes to showcase all that history in a way that captures the story of golf in America.

“We tell the story of golf in the context of social, political, cultural and economic history,” Cronheim said. “We want people to know when they come through here that the game of golf has been a part of American history just like any other sport.”

Cronheim, 38, has always been a museum aficionado, and knew from an early age that she would land in that world. She attended Cornell University before earning her Ph.D in Art History from Duke. She scored a job with the USGA not long after and has since worked her way up to senior director.

Cronheim oversees a series of exhibits and rooms that span from C.B. Macdonald and Donald Ross to Tiger Woods and Phil Mickelson. There are spaces dedicated to titans of the game, such as Bobby Jones and Mickey Wright, and a Hall of Champions featuring the names of every USGA champion dating back to the 1800s.

But golf’s greatest champions aren’t the only figures that get their due. There’s also an assortment of artifacts that illustrate the connection of golf to American history, including Alan Shepard’s makeshift 6-iron that he it on the Moon and leather-wound golf balls built at German work camps during World War II.

Most remarkable, only about 5 percent of artifacts the museum owns is on exhibit. The rest live in a secure storage location on site that has everything from a Rembrandt golf painting to the signed scorecards from every USGA championship.

Cronheim’s job is to showcase the pieces that tell the story of golf in the most complete way.

“It’s the greatest job in the world,” Cronheim says. “For me, golf is a new passion, so for me it’s marrying an old, lifelong passion of mine, being in museums, with a new passion and a new subject matter.”