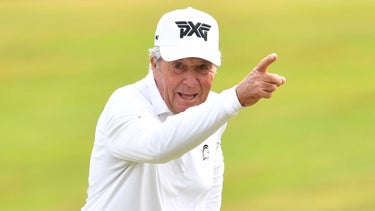 There’s a right (and wrong!) way to pull your ball from the hole, and also best practices for repairing any damage. A superintendent explains.

There’s a right (and wrong!) way to pull your ball from the hole, and also best practices for repairing any damage. A superintendent explains.

When he isn’t busy doing crunches and chugging smoothies, Gary Player can often be found sharing his opinions.

One of his recent hot takes focused on an update to the Rules of Golf that he described as the “worst rule ever.”

That would be Rule 13.2 a (2), which was revised in 2019 to give players the option of leaving the flagstick in when putting.

The goal was to help improve the pace of play, and in that sense, mission accomplished.

But Player believes there’s been a downside.

“You get these guy with their big hands, and they go to take the ball out of the cup, and they squeeze their hand in between the cup and the flag. They pull the cup up, and every cup you play now is raised.”

That’s hyperbole, of course. But Player has a point. Jamming your hand into the cup can indeed cause damage.

So, what are the right and wrong ways to pull your ball from the bottom of the jar? And if you inadvertently damage a cup, what’s the best way to repair it?

With help from Tom Kaplun, superintendent at North Hempstead Country Club, in Port Washington, N.Y., and a 19-year member of the Golf Course Superintendents Association of America, we lined up a list of rules.

Take it low and slow

There’s a fine line between brisk play and reckless haste. When you retrieve your ball, resist the urge to rush. The safest method is to remove the flagstick slowly and reach your hand in gently. No slamming. No jamming. No damage done.

Let’s say you’re feeling lazy and removing the flagstick seems like too much effort. OK, fine. But do your fellow golfers and the maintenance crew a favor and take precautions. At North Hempstead, Kaplun requests that golfers be “cup conscious.” That means pressing your hand flat against the stick and sliding it slowly into the cup. In most cases, you can pinch the ball between two fingers and remove it without affecting the cup edge.

Putters are designed to knock balls into the hole, not to pull them out. Using the head of your putter as a retrieval tool is a no-no. “The cup is not large enough, and the scoop action destroys the edge,” Kaplun says. The market is awash in ball-retrieval gizmos, including mini-plungers that attach to the butt of the putter grip. Those can be OK, Kaplun says, but they can also be “problematic” if you’re using a putter with a fat grip.

Don’t try to finesse it with the flagstick

You know the one where you try to get the ball out by popping it from the hole with the flagstick? Kaplun is not a fan of that method either, as it often involves tilting and jiggling the pole against the cup, which can knock the edges out of round.

Some courses use edge-saving devices that sit at the bottom of the cup, with a plate that lifts when golfers pull the flagstick, bringing the ball up with it. Those work nicely, Kaplun says. The only problem is that golfers often forget they’re there and take some other ham-fisted approach instead.

During the pandemic, some courses placed pool noodles in the cup to prevent the ball from dropping all the way to the bottom. Kaplun says that was the best edge-saving system he saw during lockdowns. He liked it so much, he’s thinking of implementing it at his club next year.

If you damage a cup edge, don’t feel bad. But do repair it.

Kaplun recommends using a ball to tap the dinged-up edge back into place. If the damage causes upheaval around the cup itself, Kaplun suggests using the flat part of your putter to tap the lifted tufts back down.