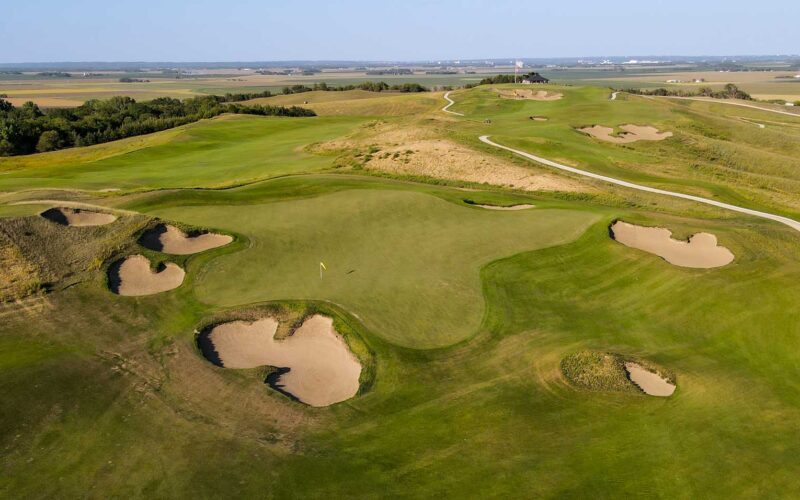 Landmand, a new course in Nebraska, offers a friendly suggestion on how to rank its holes in handicapped matches, based on the conditions.

Landmand, a new course in Nebraska, offers a friendly suggestion on how to rank its holes in handicapped matches, based on the conditions.

Nature’s fan is a big part of the game.

It affects our shot shapes and club selections.

It turns punishing holes into pushovers, and benign ones into bears.

Every golfer knows this.

But with rare exceptions, we don’t account for it in the matches that we play.

One of those exceptions is Landmand Golf Club, a newcomer in Nebraska. Opened this summer, Landmand stands out for many reasons. The first 18-hole design by Rob Collins and Tad King, the duo behind Sweetens Cove, in Tennessee, Landmand is a big, bold layout, set on roughly 580 acres, nearly four times the size of the average course. It’s rollicking good fun, and it grabs your attention with its style and scale.

But it also makes a statement with its small print.

Check out Landmand’s scorecard. The handicap indexes on the holes — which determine where players get and give strokes — shift with the wind.

Take, for instance, the par-5 1st. In the prevailing southeast breeze, the hole is considered pretty tame. It’s the 17 index, the second-easiest hole on the course. Slim chance that anyone is stroking. But when the wind flips, the rating on the scorecard does, too. The 1st hole morphs into the 3 index, aka the third toughest.

And so it goes on all 18. Different winds. Different stroke allocations. Different recommended terms if you’re playing a handicapped match.

How did this quirk come about?

The concept was put in place by Landmand’s owner and developer, Will Andersen, a local farmer and a serious stick. Some years ago, on an outing to Sand Hills Golf Club, the famed minimalist design in the Mullen, Neb., Andersen noticed that the course had not been rated. Such were the wishes of the hush-hush club. In the absence of official hole indexes, Sand Hills members had come up with their own informal system, with hole indexes that varied with the prairie winds.

Andersen liked that. The idea stuck. When Landmand was in construction, Andersen spent much time on site, smacking shots in the dirt as the course took shape. Even in those early stages, in breezes that could be both forceful and fickle, the Jekyll and Hyde effect was clear.

“Some holes were just so much tougher when the wind got going in a different way,” Andersen says. “I thought we should have something that recognized that.”

Handicapped matches are almost as old as the game itself. The earliest known reference to strokes given and gotten dates to the early 1600s, though the term “handicap” was not used then. As for handicapping individual holes, the history of that practice is hazy, but it was likely born around the same time that the course-rating system started, about a century ago. That’s according to the folks at the USGA.

In 2020, when the governing bodies adopted a new World Handicapping System, they implemented a feature that accounts for course and weather conditions. In Europe, where many seaside courses have prevailing conditions that differ from morning to afternoon, the handicapping system can be adjusted to account for the time of day.

But there’s nothing official, anywhere, that modifies hole-by-hole stroke allocations.

Landmand has an official course rating. The Nebraska Golf Association took care of that. It’s listed on the scorecard. If you’re posting a score for handicap purposes, that’s the rating that applies. Landmand’s flex system is something else. It was implemented as unofficial guidance — a friendly suggestion on how to rank the holes in handicapped matches, based on the conditions.

Not many public courses have a system like it. Come to think of it, we don’t know of another in this country that does. Andersen doesn’t either. He adopted the system because he thought it would be fun.

He concedes that it’s imperfect.

What happens, for instance, if the winds switch mid-round? Do you have to change your handicapping with it?

“I hadn’t really considered that before we opened,” Andersen said. “And then someone asked me, Hey, what do you do if a storm blows through as you’re playing?”

Andersen doesn’t have a one-size-fits-all answer.

Then again, it’s also not golf if you’re not arguing with buddies as to who should be stroking where.