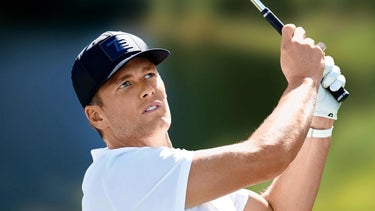 Collin Morikawa thinks he’s getting old. Now the 25-year-old superstar is trying to play his way back into shape before the new year begins.

Collin Morikawa thinks he’s getting old. Now the 25-year-old superstar is trying to play his way back into shape before the new year begins.

That’s not to say he is old, of course. Morikawa is 25 years old, which is young, by any measure. It’s young for a golfer. It’s young for a professional golfer. And for all our disagreements as a species, humanity seems unified around the idea that no young people should ever be able to complain about getting old. (For clarity: You’re allowed to complain about getting old to younger people, but never older people. That’s the rule.) So Morikawa may not find much sympathy from the general golf populace. Still, he feels old nonetheless.

Morikawa was cheery as he greeted the media at this week’s World Wide Technology Championship at Mayakoba. He showed the Tour’s media official photos of the view from his room. He said he plans to enjoy the beach nearby. But then he made it very clear that he’s here on business, determined to end a turbulent 2022 season on a high note.

“This year’s been fairly stressful, a little frustrating at the same time,” he said. “I think some guys are definitely taking it easy and I’ve kind of ramped it up just trying to kind of figure things out. I want to finish this fall with the best foot forward as possible. That’s why I come to these tournaments, to come out here and play well and hopefully win.”

Morikawa got accustomed to winning early and often in his young career. He won once in 2019 at the Barracuda Championship. Twice in 2020, including the PGA Championship. And three times in 2021 (twice on the PGA Tour, once on the DP World Tour), including the Open Championship. This time last year Morikawa was making a charge at World No. 1, a dream that was almost fulfilled at the Hero World Challenge. But it hasn’t come as easily this time ’round the sun.

Morikawa began his 2022 in Hawaii before taking a trip to play back-to-back events on the DP World Tour: The Abu Dhabi HSBC Championship and the Dubai Desert Classic. That, he says, is when he began feeling off.

“A lot of searching and a lot of just kind of guessing, right?” he said. “Ever since I made the trip out to Dubai and played the DP World, played Abu Dhabi and Dubai earlier in the year, things just never felt good. Just kind of was searching for that game, searching for some kind of normal.”

The problem, Morikawa said, is that he tends to search for perfection. He’s not used to settling for good enough. And so even when he ground out top-tier results — a T2 at the Genesis Invitational comes to mind, just a few weeks later — he still didn’t feel right. He kept searching. Searching is stressful. Morikawa still logged a handful of top-10 finishes but earned just that single trip onto the podium. He began the year at World No. 2 and has slipped to No. 9.

“It was a lot more stressful this year,” Morikawa said. “I’ve just been trying to figure out what was wrong when it was simply just kind of a body thing and just the way my body was moving.”

You’ll recall Morikawa struggling throughout the year to hit his patented baby fade, and then committing to a draw, and then returning to the fade again. He was still among the best ball-strikers on Tour (ranking third in strokes gained: approach) but struggled on and around the greens. He figures it’s all connected. As for the cause of the body change? Re-enter Morikawa, aging superstar.

“To be honest, I think it’s just getting old. It’s just getting old,” he said. “I mean, man, I drank way more in college than I ever do now, but apparently when you get older, your body just moves differently. I still feel great, like everything feels great, everything moves great, but it’s just not as clean as it was. And the maintenance I have to do now is just a little bit more.

“It doesn’t mean I need to do anything crazy, I’m not changing anything really, it’s just getting my body to where I need it to be. Say, last year I didn’t really have to focus on it, but when I look back and you think about how much travel I’ve done over the past three and a half years, it’s a lot. It doesn’t stop. I love it, but travel takes a toll on your body and it takes a toll on you and you’ve got to be able to kind of work your way through that and that’s what the best athletes are doing.”

That doesn’t have Morikawa concerned, necessarily. But he’s doubling down on his recovery and he’s trying to play his way into shape.

“I’m going to use this kind of fall season no matter how it turns out just to kind of fire myself up for ’23 and be ready come beginning of January,” he said. But he acknowledges a trip to the Riviera Maya isn’t exactly roughing it.

“Sitting on the beach might be better for you, this week, than sitting on your bed and just watching a Netflix show, right? It’s just taking it in and just enjoying where we are, right, and I think that’s the best thing is just going out and getting some sun.”