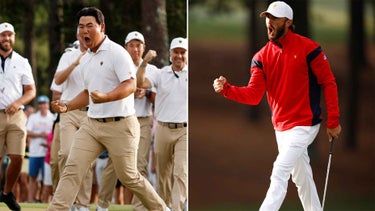 The Presidents Cup has been a roller coaster ride for International caption Trevor Immelman. On Saturday, he tried to explain it.

The Presidents Cup has been a roller coaster ride for International caption Trevor Immelman. On Saturday, he tried to explain it.

CHARLOTTE, N.C. — Trevor, what’s the vibe like in the team room this afternoon — or tonight when you left — versus the first couple days?

It was a simple enough question lobbed in the direction of International team captain Trevor Immelman — but his answer could have gone any number of ways.

“Pretty hungry. It’s been a long day,” he said. That made sense. Double sessions are exhausting. So are emotional roller coasters. But Immelman had a plan for that. Whatever the results, Immelman has had a plan for just about everything. “Don’t know if you smelled the Braai — I’m going to use the South African word. It’s South African evening tonight. So we specially brought in South African grills, and we’ve got some open fires going out on the range, and the boys are hungry, ready to eat.”

He continued. “The vibe is …” and then he trailed off. Paused. For a few seconds. Then a few more. Nearly 20 seconds passed before he chose the right word. How could he?

It’s been a week for Immelman’s squad. They arrived at Quail Hollow Club with heads held high, eager for the challenge of taking on the star-studded American team. And they’d gotten off to a disastrous start. Despite several close matches, they’d lost Thursday’s session 4-1. Despite several more they’d lost Friday’s session 4-1, too. They’d begun the week as hopeful underdogs. Now they were beaten, facing an insurmountable lead.

You could imagine the images racing through Immelman’s head as he searched for that word. Of the morning session, in which veteran leaders Hideki Matsuyama and Adam Scott rallied from 2 down to 3 up by winning five consecutive holes for a much-needed point. Of emotional leaders Tom Kim and K.H. Lee, who teamed up to take down World No. 1 Scottie Scheffler and worthy partner Sam Burns. Of that same Tom Kim, who went directly from the end of that match to the first group of the afternoon and somehow kept his energy cranked to 11 until the very final hole, where he made a putt he’ll remember forever. Of Scott and his younger countryman Cam Davis celebrating a clutch birdie — and a clutch point — on the 18th green, as the sun fell behind the bleachers, knowing they’d given their side a fighting chance. Of months and years of preparation and anticipation that had led to this moment, the team meet-ups and bonding sessions, the captains’ planning and strategizing, all of it disrupted by LIV defections and a fractured International player base.

The Internationals aren’t delusional. They knew where they stood post-round. Their team still owns a four-point deficit, seven points to the Americans’ 11, ready to do battle in singles against 12 of the most talented golfers on the planet. But if you didn’t know the score and had merely dropped in for their celebration on the 18th green, you wouldn’t have guessed they’re still massive underdogs. If you’d seen Tom Kim and Si Woo Kim riding away from a group of brand-new mega-fans, screaming in delight at their win, you wouldn’t have guessed the score. If you had walked past their team room a few minutes later to hear music blaring as the caddies entered, you would have wanted to join them. Tom Kim called it energy. Adam Scott called it momentum. Immelman called it hope. And he spoke, thoughtfully and methodically, laying out a scene that he thought best illustrated the situation.

“When it comes to Tom Kim, you know, this young kid has burst onto the scene in the last six months, and it has been such a tremendous gift to our sport,” he said.

“He has an ability to be a global superstar, this kid. I know he has the game. We’ve seen he has the game. But what I’ve learned about personality and his heart and what he stands for this week, man, I am a huge fan.

“I thought something that was so cool on the final hole today, he’s about 240 yards out. He’s probably 60 yards behind his opponents. He’s over the ball. I look back, I see the who’s who of American golf in golf carts behind him.

“I see Thomas, I see Spieth, I see Finau, I see Homa, I see Morikawa, all of them sitting on carts 15 yards from him. And this kid pures a 2 iron to 10 feet and makes the putt. To me, that’s impressive stuff. No matter who you’re rooting for, that made my heart warm right there. So extremely proud of him today. He went out. He did his job. He earned two points. And that is fantastic.”

Time will tell whether Saturday afternoon’s rally was a sign of things to come for the International team — or as good as this week gets. But in the moment, it didn’t matter.

“Today was a good day for us,” he concluded.

Tomorrow will come when it does.