‘The uncertainty of that was the scariest’: Nelly Korda opens up after emotional win 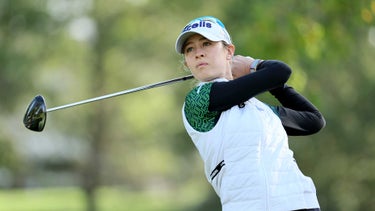 Nelly Korda, after an emotional win at the Pelican Women’s Championship, opens up on her blood-clot bout and a tough year.

Nelly Korda, after an emotional win at the Pelican Women’s Championship, opens up on her blood-clot bout and a tough year.

Nelly Korda, three times over the course of her seven-minute post-round huddle with reporters on Sunday, used the word “grateful.” Once, she said “appreciate.” And once she said “scariest.” Korda added two “uncertainties,” too.

In case you forgot how her 2022 has gone, she reminded you.

Though now you can tack on this. Winner. Repeat winner actually. And world No. 1. Again actually. On Sunday at Pelican Golf Club, where, in a few weeks, Tiger Woods, Rory McIlroy, Justin Thomas and Jordan Spieth will play their Match, Korda was unmatchable. Down two to start the day, she birdied 1. And 7 and 8. And 10, 13, 16 and 17, too. And she’s your Pelican Women’s Championship champ for a second-straight year. And, with one LPGA event to go this season, and just a couple of weeks left in the year, period, she’s your highest-ranked woman, as she had been in January.

Of course, did you see that coming when you saw her Instagram post in mid-March? That was scary.

“On Friday I was in Ponte Vedra Beach, FL for a photoshoot and a commercial appearance,” her post said. “After a typical morning workout, my arm started to feel like it was swelling. At the advice of my doctor, I went to the Emergency Room as a precaution. I was diagnosed with a blood clot.

“I am currently at home getting treatment to eliminate further risks. I will communicate my status as and when and there is more information. In the meantime, I want to thank everyone for their support and ask for privacy for all our family during this time. I hope to be back soon! Thank you. [Prayer emoji.]”

Did you see Sunday coming when you saw her next Instagram post, a few weeks later? That was uncertainty. Korda was on the mend, but in her first pic, she was in a hospital bed, her left arm wrapped in a cast, her legs tucked in a thermal blanket, and there were more wires in the photo than in the setup on the back of your TV.

Korda wasn’t so sure.

“You talked about how scary it was earlier in this year,” Golfweek’s Beth Ann Nichols began on Sunday after the Pelican. “Could you give us a little insight into what was the scariest moment of the whole ordeal with the blood clot?”

“Just not knowing,” Korda said. “Honestly, the uncertainty of everything. Obviously you get diagnosed, and I didn’t know much about it. Like obviously knew I had a blood clot, but didn’t know what the next step was.

“For me, the uncertainty of that was the scariest. As a golfer, I feel like my life is planned out. I know where I’m going next, I know what to do next, or you would hope to know, but just getting hit with something like this and just not knowing what to do or what my next step was.”

Of course, we know the ending now, but even the return, while not poor by any means, has been a little un-Nelly. At her first event back, in early June at the U.S. Women’s Open, she tied for eighth. She finished in the top 10 in half of her eight events this summer, which included two runners-up. She won an Aramco Team Series event, as part of the Ladies European Tour, in mid-August. Then Korda missed the cut in her second-to-last event, at the Northwest Arkansas Championship at the end of September. Then Korda missed the cut in her last tournament, at the Ascendant a week later.

There was some emotion. There was a hug with her dad, Petr.

And damn it felt good to reflect, to appreciate, to feel grateful, for a scary, uncertain run.

“Yeah, I didn’t even know that was kind of in play if I would’ve won,” Korda said. “Quite amazing, to be honest. I’ve never been a player that’s kind of looked at the rankings too much. I’ve always said that good golf and enjoying myself out there and playing to the best of my ability kind of solves all that.

“I’ve heard somewhere that it’s a really tight race; everyone has had an amazing year. I think for me, I just appreciate it a lot more.”

“Given all you’ve been through this year with your health, how does this win hit differently and that hug with your dad?” Nichols asked.

“Yeah, I’ve said it so many times, but it’s just been such a roller coaster,” Korda said. “I mean, I guess that’s life, though. There has been more downs than ups this year, I think, and I think that that’s what makes this so much sweeter to me.

“I didn’t think I would get — with the way my game was as well in the last two LPGA starts that I had, I didn’t think that I maybe had the confidence that I was going to win.

“But I had a good solid couple weeks, and I told myself, step by step. I had good memories on this golf course. I was home. I had the comfort level of my parents being in the crowd, too, which plays a part.

“And, yeah, just grateful that I’m sitting in front of you guys here today. Right now. Not that I would’ve been dead, but just out here competing.”

At this point, Korda laughed. It’s Nelly after all. This isn’t all grim.

With that, we’ll end things with this exchange.

Korda was asked if she Googled anything about her blood clots.

“I try not to Google because Google does not make you feel better,” she said. “It makes you feel worse. Yeah.”