The secret to making perfect poutine, according to a Canadian golf club chef 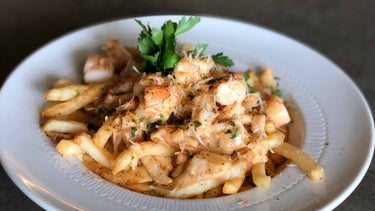 The unofficial national dish of Canada, poutine is a polarizing culinary creation. “People love it or they hate it,” says Malcom Campbell, executive chef at Cabot Cape Breton. “There isn’t a middle ground when it comes to poutine.”

Originally created during the late 1950s in Quebec, poutine is made up of just three staple ingredients: French fries, cheese curds, and gravy. Those who love it proclaim that the dish shines for being more than just the sum of its parts; and in that regard, Chef Campbell agrees. “It all comes together,” he says of the dish when it’s made the proper way and with high-quality components. “It’s a complete meal that hits everything.”

Poutine detractors, however, will often point to that same combination of ingredients — particularly gravy poured over the fries — as the reason why the dish can be off-putting. Their criticisms are largely an issue of texture, since it doesn’t take long for the fries to lose their crispiness. That’s why Chef Campbell instructs the line cooks at Cabot Cape Breton to make the fries extra crispy, which is the same advice he offers amateur cooks who are looking to create their own plate of poutine at home. He also acknowledges that it’s best to fry them in oil — fries made in an air fryer or ones that are baked won’t work well. “Overcook them a touch,” he says, “so the fries hold up a bit better to the gravy.”

And speaking of gravy … When it comes down to it, a well-made gravy — at least in Chef Campbell’s opinion — is what makes or breaks poutine. “If you make a proper gravy, it’s great,” he says of the dish. And to make a really good gravy, you have to start with flavorful, high-quality ingredients. “If you’re making a gravy,” he adds, “you need to work with really good chicken stock.” (We’ve included Chef Campbell’s recipe for homemade chicken stock below, as well as the resort’s basic gravy recipe.)

Finally, don’t overlook the cheese curds. Any other form of cheese just won’t cut it. “You’ve got to have cheese curds,” he says. “You don’t want to be substituting them for other things, otherwise you’re just making cheesy fries, and it’s just not the same. It’s cheese curds or bust.”

Cabot Cape Breton offers two different poutines — a classic preparation (served in Whit’s Public House), and a more elaborate variation (served at Cabot Bar), which is accented by braised short rib, fried onions, pickled jalapenos, and black garlic aioli. Below, we’ve included recipes for Cabot’s classic poutine, which is certain to hit the spot during the colder winter months. “It’s comfort food for sure,” says Chef Campbell. “It warms up your soul.”

How to make perfect poutine

Arrange chicken bones, wings, and feet on a baking sheet and roast in a pre-heated oven at 400 degrees F until nicely browned (about 30 minutes).

Add enough water to cover the contents of the pot by about two inches.

Bring the mixture to a boil, then reduce the heat to low and let simmer for four to six hours. As the stock simmers, skim off any foam or impurities that rise to the surface.

When the stock has finished cooking, strain it through a fine-mesh sieve or cheesecloth to remove the solids.

When cooled, transfer the stock to an air-tight container and store in the refrigerator until ready for use.

Melt butter in a small sauce pot over medium heat.

Once the butter has melted and foaming subsides, whisk in flour and pepper until smooth. Cook for a few additional minutes to cook out the raw flour taste.

Remove from the heat and season to taste with salt. For richer gravy, you can also stir in a few tablespoons of butter.

Warm gravy in a saucepot, then add a handful of cheese curds until they just begin to melt.

Fill a serving bowl with fries, then ladle the gravy and curds over the fries.

Top with additional cheese curds and chopped scallions, if desired.