The PGA Tour is about to look different. Will it be different enough? 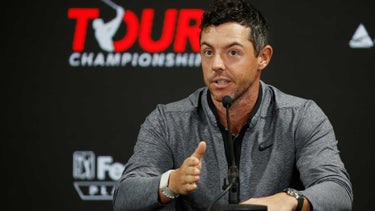 This week’s Tournament of Champions marks the first “elevated event” in PGA Tour history. But it doesn’t feel as different as you might think.

This week’s Tournament of Champions marks the first “elevated event” in PGA Tour history. But it doesn’t feel as different as you might think.

KAPALUA, Hawaii — Ahead of this week’s Sentry Tournament of Champions, competitors received a “Player Advance Sheet,” as they do before every event. But one entry listed under “TOURNAMENT NOTES” stood out.

“This season, at the request of the membership, policies have changed to allow caddies access to locker rooms at all times to be able to assist the player as needed.”

Caddies getting locker-room access may not seem like a big deal. But the notice is significant because of what it represents: the PGA Tour is new and improved and it’s seeking to make changes in response to the rise of LIV Golf. This change felt like a particularly direct response because LIV scored immediate points with its members last year by making life easy for their caddies. The fact that the Tour is changing its caddie policy demonstrates two things: 1. They’ve been spurred to action by their competition and 2. PGA Tour players have realized they can make actual changes.

This week is unquestionably the beginning of pro golf’s next chapter. Last spring and summer, LIV Golf threw a series of haymakers at the establishment, but the Tour’s top pros consolidated by summer’s end, forming a plan for 2023 that would stop the bleeding. That plan? Top pros would agree to play a set of “elevated” tournaments — guaranteeing stronger, more exciting fields — and in turn those events would pay out more money. The move was deemed significant because of the corresponding jump in cash but also because of the way Tour pros agreed to work together to effect change. In a league defined by its rugged individualists, that doesn’t usually happen. So far, the changes have had their desired effect: no top-ranked pros have left since the end of the FedEx Cup Playoffs.

But change doesn’t all come naturally to the PGA Tour. Need a reminder? Just read the final sentence in that player notice:

“Please note that caddies are asked not to loiter or linger in the player locker room when not assisting their player.”

In other words, caddies are allowed into the locker room just as long as they don’t get too comfortable. Which begs the question: On the eve of a pivotal 2023 tournament season, has the PGA Tour changed enough?

In fairness to the Tour, there are very real changes going into effect this week. Money is unquestionably the most important to the majority of players; nobody likes to feel underpaid and so it’s helpful that the Sentry Tournament of Champions purse has jumped from $8 million last year to $15 million this year, with $2.7 million going to the winner and $200,000 guaranteed to the 39th-place finisher (in a 39-player field). Nearly every top Tour player is here, with one notable exception: vocal leader Rory McIlroy is using his only “skip” of the season (every top pro gets one) to miss out on Kapalua. (Shane Lowry is the only other eligible pro who’s absent; when I talked to him at the Hero World Challenge he had a simple explanation: “Do you know how far it is from Ireland to Hawaii?”)

The purse hike and the strong field are each signs of things to come. Last year the Tour made a series of decisions that promised the rich would get even richer, doubling PIP payout to $100 million. It gave its rookies a boost, too, guaranteeing $500,000 to every full member and tournament stipends for members with partial status. It also lined up 13 “elevated events.” Those 13 plus the four majors would ensure that a large majority of “top players” will compete 17 times in the same fields for average purses of $20 million, dwarfing the Tour’s previous payouts. Everybody is making more money and fans are winning out, too, by getting clarity on which tournaments really matter.

But for all the changes, this year’s Tournament of Champions feels a lot like last year’s and the year before that, too. The structure is the same. The faces are the same. Even the news of the day — logging which equipment companies have signed which players — is shockingly familiar. Big-picture, everything is the same: they’re still contesting the tournament over 72 holes of individual stroke-play golf.

If LIV Golf’s 54-hole individual-team hybrid shotgun-start format was a revolution, the PGA Tour’s response remains a bet on the status quo. That’s all well and good as long as the Tour doesn’t forget why it made changes in the first place. But there’s an awkward tension between hyping up the big events without leaving the others behind, and the Tour seems unsure whether or not it should be bragging about this week as the beginning of something big and new. Even the terminology “elevated events” has all but disappeared from its recent communications, and a story on its website homepage touts the strength of field for its upcoming (non-elevated) tournaments in California, a clear reminder that it wants those events and their sponsors to be happy, too. And its FedEx Cup points system does little to distinguish star-studded elevated events from the others. If you don’t look at the end-of-week payouts you’d be forgiven for thinking that nothing had changed.

But the changes have been enough to satisfy its top stars, at least for now. McIlroy and Tiger Woods have been outspoken proponents of the plan and helped make it a reality. Jon Rahm, who had some initial reservations, praised “the direction” of the PGA Tour.

“I mean, they’re making the necessary changes to adapt to the new age and I think it’s better for everybody,” he said on Tuesday.

Will Zalatoris has bought in, too, and said he doesn’t plan to skip even a single elevated event. “Why does F1 work? Well, you know Lewis Hamilton’s going to be there at every single race. So is Max Verstappen,” he said.

“I think the guys are excited with just all being able to play against each other and feeling like there’s going to be [17] tournaments this year where most of the top 50 players in the world are all playing the same event,” he said.

But other pros acknowledged that this feels mostly the same.

“It doesn’t feel that much different, to be honest,” Justin Thomas said. “I think maybe come week’s end it might, but just so far throughout the week it hasn’t felt any different.”

“I think with the designated event feel, it’s a little bit, I mean, I don’t know,” Scottie Scheffler added, trailing off. “I think this one still always gets a pretty good field.”

But he, too, referenced his excitement to be up against the best pros on Tour increasingly often.

Scheffler was also the latest to reference the 2024 season, which will run January to August and be the first PGA Tour schedule without a fall portion. It will also mark the debut of a supplemental tech-infused golf league that will air competitions on Monday nights between high-profile players including Woods, McIlroy, Rahm and Thomas. There’s an increased sense among players that the Tour is getting closer to maximizing its potential, both in player earnings and in fan entertainment. (That’s hardly unanimous, but it’s higher than it was last spring.)

There’s plenty about the future of men’s professional golf that the PGA Tour can’t control. It can’t control the amount of money the Saudi Public Investment Fund decides to pour into the game in 2023. It can’t control the level of interest fans will demonstrate in LIV’s new-look league. And there are pros it won’t be able to retain due to the simple fact that they’ll make more money playing for LIV.

There’s also no question the Tour misses the range of personalities who have fled to LIV. The elevated events would have been more compelling with Dustin Johnson and Brooks Koepka and Bryson DeChambeau and Patrick Reed. The Tournament of Champions is reduced without its defending champion Cameron Smith.

Like any good New Year’s Resolution, the PGA Tour is beginning 2023 by focusing on what it can control. It’s laser-focused on retaining its existing talent. It’s doubling down on its existing product. That may not be a golf revolution. But there’s no doubt it’s a step in the right direction.