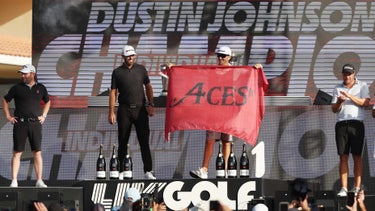 Between competing tours, a Netflix series and primetime golf under the lights, we’ll know in six months how popular pro golf really is.

Between competing tours, a Netflix series and primetime golf under the lights, we’ll know in six months how popular pro golf really is.

Let’s imagine it’s April 2023. You’re on the comedown from yet another thrilling Masters tournament. You streamed it all day Thursday and Friday and and why wouldn’t you? It’s the pinnacle of the sport. Golf’s Super Bowl, many will tell you, and everyone who matters was involved. That was a nice change of pace, because it hasn’t been the case in eight months.

You’ve actually been watching a good amount of golf for the last month or so, because now there’s more golf than you can keep up with. There was the Players Championship in March and the WGC-Match Play and sprinkled in among those a handful of LIV Golf events. But now in late April, LIV Golf is in Australia. Or maybe Singapore. The PGA Tour is in New Orleans during the day and on your television at night are those LIV golfers who used to play on the PGA Tour. There’s also the NBA playoffs and the NHL playoffs and baseball’s spring start. How many will watch the golf? Will you?

It’s always been a tricky question for golf as a sport. How many will watch. The query is often carried with an extreme dose of pessimism, and you might even detect some of that here. The reason for it is that more is not always better. And we’re getting more than we’ve ever had these next six months. We’re about to find out just how popular pro golf can be. Not all of it can stick.

Let’s imagine it’s June 2023. Dustin Johnson, the world beater that he is, triumphs in Los Angeles at the 2023 U.S. Open. He’s the first LIV golfer to win a major championship, the third of his career. That DJ, what a golfer. Perhaps the best of his generation. But does his win at LA Country Club get you to tune in to the following LIV event, this one at Trump National in Virginia, as Johnson looks to double down on his success? If not then, when are you tuning in for the DJ show?

We can rewind from 2023 for just a second to December 10, 2022. It’s Tiger Woods season, as Woods returned at his Hero World Challenge in the Bahamas, and then competed alongside Rory McIlroy and against Jordan Spieth and Justin Thomas. Their battle, under the lights at Pelican Golf Club, is on TNT and goes up against the Heisman Trophy Ceremony, which feels harmless enough. College football is out of the way, so is the MLB. Woods and McIlroy make jokes about being the old guard and Thomas and Spieth ultimately make them feel that way, winning the 12-hole match 2 and 1.

If ever there was a time to tune in for a two-on-two golf duel, Dec. 10th may be it. It also may be the perfect dress rehearsal for what we’ll get in January 2024 when TGL launches its virtual golf league, played exclusively on Monday nights during prime TV hours. You can reasonably expect Spieth and Thomas to be involved (Thomas is repped by Excel Sports, an investor in the parent company, TMRW Sports). Woods and McIlroy will obviously be there — that’s their new baby. As an experiment alone, we’re going to find out the public’s interest in watching golf after dinnertime.

Great news, now! It’s February and you’ve fallen even more in love with Joel Dahmen. How’d you fall for Joel? By watching the Netflix documentary series on the 2022 season in pro golf, which has been out for a few weeks. Vox Media Studios had unfettered access to Dahmen and a number of pros all year long, and Dahmen’s ability to shoot 67 and chase it with Miller Lites appeals to you.

If Joel is playing in the Honda Classic, held annually in Jupiter, Fla., you’ll tune in. He used to play it pre-pandemic, when life was simpler for all involved. But if he’s not playing, you might not turn on Golf Channel once, since the Honda is merely a normal PGA Tour event sandwiched in the center of five weeks with four elevated, mega-millions events. That same week, elsewhere in Florida, LIV kicks off its second season, asking us all: what matters most, the first round of the LIV season, or the second round of the Honda Classic? In the latter, Nos. 82 and 137 in the world are vying to simply make the cut and add to their bank accounts. Otherwise, they’re sent packing. At LIV, well, they’re being taken care of handsomely.

The Netflix show also did a lot of humanizing for Brooks Koepka, whose opinions are just a lot easier to understand when he shares them on the couch of his intracoastal home than on the podium of one of his curtly press conferences. You like Koepka quite a bit more than you did a season ago, and since he’s three back at LIV’s first 2023 event, you tune in on Sunday afternoon, now that you can actually find LIV on your TV guide. Better have that remote handy if Dahmen is in contention.

All of these hypotheticals — all modern opportunities men’s pro golf has manifested, for better or worse — bring us to rethink the public’s appetite for golf. It’s never been easy to track two tournaments at once, happening at the same time. But how about three? This column has said absolutely nothing of the LPGA Tour, which will wedge its way in and around everything explained above. How much TV golf can we handle? And how much do we want? This website certainly hopes the amount is high. But what if we find that it’s not?