The Match report cards, plus best shots and moments of the night 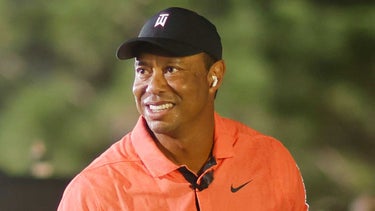 Missed the broadcast of The Match VII? We’ve got you covered with all the action from Pelican Bay from the best shots, to the best lines.

Missed the broadcast of The Match VII? We’ve got you covered with all the action from Pelican Bay from the best shots, to the best lines.

So, yeah, primetime golf under the lights with Tiger Woods was every bit as cool as it you might have expected.

Woods made his highly anticipated return to competitive golf at The Match VII in a made-for-TV exhibition alongside Rory McIlroy against Justin Thomas and Jordan Spieth.

In case you missed the broadcast on TNT — it lasted only 10 hole, after all! — here’s what you need to know.

Who won The Match?

How did Spieth and Thomas win?

After tying the first hole with birdies by Woods and Thomas, the young stars quickly jumped out to a 3-up lead through four thanks to bombs made by Thomas on the second and Spieth at the third. Thomas then made an incredible par on the 4th during the one-club challenge, playing the par-4 only with a 5-wood.

Things seemed to take a turn in favor of the old guard of Woods and McIlroy on the 6th when Thomas, within five feet for birdie, gave McIlroy a 10-footer for par.

“I better make this,” Thomas said.

He didn’t, and McIlroy birdied the par-5 7th to cut the lead back to 2 up.

But Spieth and Thomas twisted the dagger on the next hole, the par-3 8th. Woods and Thomas hit the green, but Thomas got reads from both Spieth and McIlory, who were just off the green, long right.

After Woods pulled his 15-footer, Thomas’ birdie try caught the low lip and dropped. Spieth was quick to pop the ball out and back to Thomas as he was already headed to the next tee with the match all but over.

On the 10th, Spieth played his second shot first from the pine straw right of the fairway and his approach never left the flag, settling about 6 feet below the hole. Thomas went next and hit a slinging wedge shot that landed on the right edge of the green and spun some 25 feet left down to about 4 feet from the hole to all but lock up the hole.

A birdie from McIlroy was too little too late as Spieth drained his putt to secure the win.

Shot of the night

Before the final hole heroics from the winning side, Thomas played the one-club challenge hole, the 4th, with a 5-wood, and the choice paid off as he was the only player to make par.

His approach flew the green on the 455-yard par-4, but luckily caught a break, hitting the seat cushion of a cart parked behind the green.

From there, Thomas’ line to the green was just fairway, with the exception of a cable Spieth and on-course reporter Kathryn Tappen held up and out of the way for him. He played the ground game to cozy up his third to just a couple of feet to secure the par and the win.

Best line of the night

Anything between JT and Charles Barkley.

It started with Barkley, who was commentating on the broadcast for TNT, asking Thomas how his wedding was.

“Best night of my life,” Thomas said. “I wish I could have it over again.”

Then Barkley replied in the way only Barkley can.

Then there was Barkley, who went to Auburn, ribbing Thomas by repeatedly calling his alma mater “Alabama University” instead of the University of Alabama.

Woods (B-): Woods, who withdrew last week from his own tournament at the Hero World Challenge, lowered expectations further when he said he hadn’t played in two and half weeks. But the soon-to-be 47-year-old had a surprising amount of pop in his swing, flirting with 180 mph ball speeds throughout the night. He nearly drove the first green and made an easy birdie. He also hit just two stupidly good slingers with 5-irons on 4 to get himself up around the green on the 455-yard one-club hole. But those were the lone highlights as he didn’t really factor on many other holes and missed a must-make birdie try from about 12 feet on 8.

McIlroy (C+): The World No. 1 was a bit of a disappointment, making just a birdie on the lone par-5 and one on the final hole when it was pretty much over. His opening tee shot was pushed right, short-sided on the drivable par-4, but the rest of the night he seemed to be struggling with a hook. He got saddled with a 3-iron during the one-club challenge and made a mess of the hole and just couldn’t seem to get any momentum going until the 10th when he made a birdie. But the match was already over by that point.

Thomas (A-): Thomas put on a show, starting with his cozy chip at the first and a bomb at the second, he even got better from there. His par with just a 5-wood on the 4th was spectacular and his slinging wedge on the 10th was downright filthy. His birdie on 8 was the clincher for the match. We give him a minus on the report card solely for giving McIlroy the 10-foot par putt on the 5th after Thomas was in tight and then missing the birdie putt. Had he made it, we would have awarded him a plus for the chutzpah.

Spieth (B): Spieth was overshadowed by his partner, but his golf was solid, if not unspectacular, aside from his birdie on the par-3 3rd and his Spieth-like recovery from the pine straw on 10 to slam the door shut. His only real mistake came on the par-5 7th when he made a bogey from 60 yards out and was subject to some needling from Woods.