The Match broadcast review: Hits, misses from primetime golf under the lights 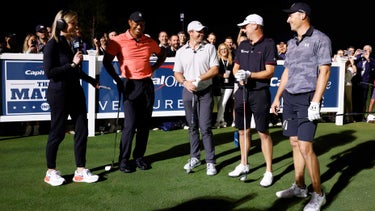 There were lights illuminating the course; mics capturing the banter; and, yes, Charles Barkley. Here’s a closer look at TNT’s coverage.

There were lights illuminating the course; mics capturing the banter; and, yes, Charles Barkley. Here’s a closer look at TNT’s coverage.

It was evening in the Tampa area and the stars were out, four of the game’s brightest, playing a different brand of golf that required a different kind of broadcast. TNT broke out all the bells and whistles to bring us the action and the antics from The Match, Saturday’s primetime charitable shindig pitting Tiger Woods and Rory McIlroy against Justin Thomas and Jordan Spieth.

There were lights to illuminate the course; tracers to track every drive and iron; mics to capture every bit of banter; and Charles Barkley to bust everybody’s chops. On the scorecard, Spieth and Thomas won 3 and 2. But we were keeping tabs on a different tally: the quality of the coverage. Here’s a look at the hits and misses from the broadcast.

Aside from the hurricane-relief money it raised, the best thing about The Match was the time of day they played it. Under the lights, the course took on an otherworldly neon glow that was more memorable than much of the shotmaking. The setting was so striking it made us think that if it weren’t for the shadows and tricky depth perception, pro golf might consider staging more events at nights.

In fairness, pre-game segments in most sports rarely offer much more than commercial filler. But we were hoping for more from a roundtable interview with the four superstars, which offered little in the way of insights, unless it’s new to you that the three other guys all have great respect for Tiger. Better was the mic’d-up warmup session, highlighted by a funny moment when McIlroy, trying to get a feel for the lightning greens, inadvertently putted a ball into the water.

The Match was further proof that a snail race would be watchable with Sir Charles in the booth. From start to finish, Barkley was in his usual fine form: funny, forthright, self-effacing. No one is safe from his clever ribbing, which somehow never crosses the line into cruelty (even when he’s suggesting, as he did during the broadcast, that a newly married Justin Thomas might someday get divorced). For all his joking, Barkley can be serious in just the right doses, which he did Saturday evening with frequent reminders of the charitable mission that had brought about the Match.

Miss: ‘Inside the Ropes’ segments

True to the name, these outtakes were meant to bring us closer to the action by allowing us to eavesdrop on intimate moments. But the first time the broadcast took us Inside the Ropes, the audio from all four players’ mics was garbled, producing nothing more than minute-plus of static. The second time around, the sound was fine, but hearing the players clearly underscored another problem with the segment: audio “extras” don’t add much when the entire Match is already mic’d up.

Neither/Nor: The other guys in the booth

For golf broadcasters, economy of words is a valuable skill, especially in exhibitions where the guys with the clubs are the ones we want to hear. What play-by-play man Brian Anderson and commentator Trevor Immelman lacked in searing insights, they made up for by mostly staying out of the way. Immelman’s best moment came when he explained Spieth’s pre-shot routine, after which Spieth, listening to the telecast through an earpiece, said, “That’s right, Trevor.” Anderson’s highlights came when he was coaxing explanations from McIlroy and Spieth about the shots they were about to it — insightful snippets that almost passed as playing lessons. A low point, by contrast, came on the 6th hole, when Anderson joked that Woods, who was struggling, was getting a shot from everybody in the group. Coming from Barkley, the line might have worked. Coming from Anderson, not so much.

If you were hoping for a litany of zingers, you might have found the back-and-forth lacking. There was little in the way of scorching insults, guffaws or gotchas. Refreshingly, though, unlike some other iterations of The Match (we’re looking at you Brooks and Bryson) the evening was also light on forced and awkward chatter. Not that the guys pulled all their punches, but they kept it playful, punctuated by this cheeky remark from Thomas as he and Spieth closed out their elders. “Hey,” he said. “Second place isn’t bad.”