The margin between PGA Tour golf and Korn Ferry? It’s thinner than you think, one rookie says 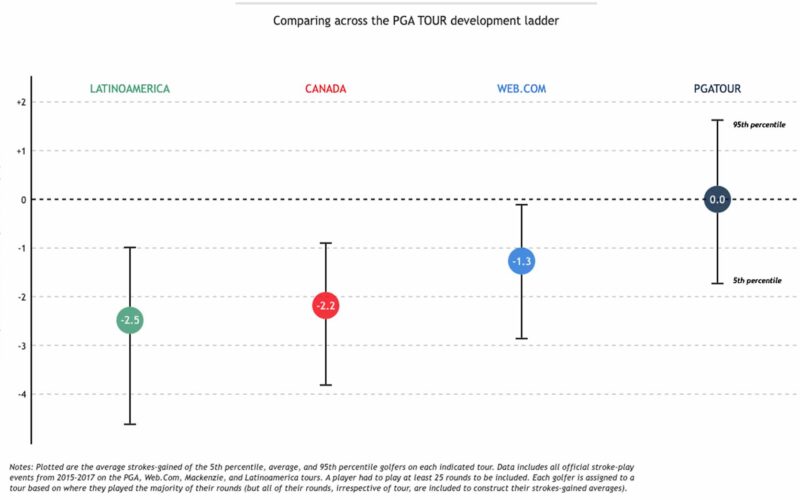 What’s the difference between a top-30 Tour pro and someone who loses his card? Not much, says one rookie. The data backs him up.

What’s the difference between a top-30 Tour pro and someone who loses his card? Not much, says one rookie. The data backs him up.

The myth-making cuts both ways. Some days we talk about top golfers like they’re infallible, ignoring the reality that on any given Thursday, Jordan Spieth could get clipped by a talented club pro. Other days we swing too far in the opposite direction, lumping the whole lot of ’em together, suggesting that anyone in a PGA Tour field could easily win an event when in reality, it’s a whole lot more likely for some than others. So which is it? What’s the actual difference between top pros and those clinging to their cards?

It’s October, which means it’s somehow already time to play the third event of the PGA Tour calendar. It’s evaluation season. It’s planning season. It’s dreaming season. And that means it’s a good time for pros to hone in on how well they’ll need to play to achieve their goals for the year ahead. Enter PGA Tour rookie Harry Hall, who sat for his first official Tour presser ahead of this week’s Shriners Children’s Open.

“Yeah, I went through them the other day,” Hall said, referring to his goals for the upcoming season. He had a realistic goal and added a stretch goal. “I think top 40 on the FedExCup is a goal. Playing that Ryder Cup in Rome next year would be very cool.”

If you don’t know Hall, you probably will soon. He hails from Cornwall, England, but considers the Shriners a home game; he’s based out of Las Vegas, where he’s lived since attending UNLV as a Sociology major. He’s 6’4″, hits the ball a mile and wears the same kind of Hogan cap favored by Bryson DeChambeau, earning himself the moniker of “British Bryson” on this very website last year. (It hasn’t stuck.) But up to this point he hasn’t spent much time in PGA Tour fields; the 25-year-old is making just his eight career Tour start and his third since acquiring full status via the Korn Ferry Tour.

As a result, Hall is the perfect guy to help guide us through this discovery process. Asked what he has learned since turning pro, Hall had a clear and interesting answer.

“The value of a shot,” he said. “I was having dinner with a few Callaway guys last night, and the difference between making the Tour Championship and losing your card is 0.9 of a shot, which isn’t that much. I think I’ve just seen that through being on the Korn Ferry Tour and how my stroke average has evolved from when I turned professional until now, and my bad golf and my good golf really is separated by just a shot and that the importance of choosing the right club or the right line or hitting the putt that correct speed, whether it’s one out of 68 shots, it’s a fine line between playing good and really excelling out here.”

Wait a minute. Less than a full shot separates these guys?! That doesn’t seem like much, so let’s do some fact-checking. If you look at the season-long strokes-gained averages, the final guy into the Tour Championship was J.T. Poston, who averaged 0.697 Strokes Gained: Total over the course of the season. Then take Stewart Cink, who finished No. 126 in the FedEx Cup, and Zach Johnson, who finished No. 151. Neither Cink nor Johnson will lose PGA Tour status thanks to various exemption categories, but that’s irrelevant for this point: Johnson’s SG: Total was -.203, while Cink’s was -.252. That 0.9 number checks out. Poston made $3.3 million in prize money plus a $715,000 bonus at the Tour Championship. Cink made just over $1 million, while Johnson just cracked $600,000. We’re not overly concerned about their finances, but it’s telling that less than a shot per round really adds up. Hall recognizes that already.

“I think that’s the biggest key that I’ve taken is the value of every shot, and that’s something that Coach Knight at UNLV and Phil Rowe taught me real well,” he said.

What are some other notable gaps on Tour? Rory McIlroy led last season, gaining 2.115 strokes above field average. He built a significant gap over second-place Matthew Fitzpatrick, who averaged 1.792 strokes better than the field. The most average was Danny Willett, who clocked in at .004 strokes gained, just a hair more average than Joel Dahmen, who was two-hundredths behind average. McIlroy won three times, earned $8.7 million on the course and added an $18 million FedEx Cup prize. Fitzpatrick made it out with his first major championship and $7.01 million plus $715,000 at East Lake. Dahmen and Willett made $2.6 million combined.

Still, there’s little question that Dahmen’s level of play would make him an elite performer at the Korn Ferry level. A couple years back, DataGolf came awfully close to summarizing our entire discussion with the below chart. (You can see the original here.) The lesson? The PGA Tour’s average golfer is likely better than the 95th-percentile Korn Ferry pro, and still roughly 1.3 shots better than the KFT’s average player. Still, the average Korn Ferry pro could beat the bottom of the PGA Tour barrel. There’s talent further down, too: pros on PGA Tour Canada and Latinoamerica are another shot or so behind their Korn Ferry brethren.

Back to Hall’s point, then. If the difference is just about a shot per round, there are plenty of places to pick up little pieces of a shot, on average. Every time you select a club. Every time you read a putt. Every time you hit it to 30 feet instead of 15 feet. The margin is thin. Attention to details adds up.

“You see a lot of the Korn Ferry Tour graduates like Scottie Scheffler and Cameron Young and Sungjae Im that have come out the last few years on this Tour and they’ve excelled on the Korn Ferry, I think it shows you the difference might not be as big as people think,” Hall concluded.

He’s joined in this week’s field by fellow Vegas-based rookie Taylor Montgomery. Each of them, Hall says, has tried shaving strokes in his own way.

“Imagine Taylor growing up at [Vegas course] Shadow Creek all his life and I grew up at West Cornwall Golf Club, which is 5,500 yards long, and you have to — I go back there and hit a 6-iron off every par-4 now. I came to UNLV swinging it about 104 miles an hour and Taylor was swinging it 135, and I’d hit driver off the 1st at Shadow Creek and he’d hit a 4-iron,” Hall remembered.

“At the start of this year we actually did a long-drive competition with a friend of ours at Shadow Creek, and I beat him. I swung it 126 miles an hour, and that’s a part of my game that has evolved since being in America and trying to figure out how to get better. Taylor has obviously honed it down a little bit just to hit it straighter and find a way to score himself, too.”

“He’s figured that out and I’ve figured it out how to hit it further. Hopefully we can both be some of the best players in the world,” Hall said.

They’re just a couple of shots away.