The 8 best American Whiskies for holiday gifting (or drinking!) 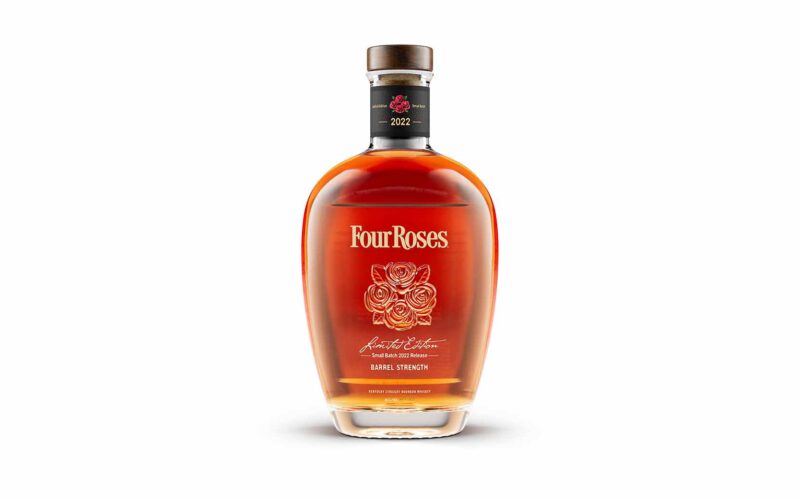 With the winter holidays fast approaching, it’s time to stock up on some exceptional American Whiskey. Here are our favorites.

With the winter holidays fast approaching, it’s time to stock up on some exceptional American Whiskey. Here are our favorites.

With the winter holidays fast approaching, it’s time to stock up on exceptional whiskey to mark the occasion. As a way of providing guidance on noteworthy expressions to seek out, we’ve highlighted eight American whiskies, all of which could be considered special pours for celebratory moments. Why eight, you ask?

Is it so we could change the line about “eight maids a-milking” in the 12 Days of Christmas to “eight distillers blending?” To be honest, we hadn’t even considered that. But we like the modification.

Is it to align with the eight crazy nights of Hanukkah — a bottle to be opened and enjoyed each evening? Um, sure. Let’s go with that.

Or is it because eight is deemed a lucky number in Chinese culture, and sipping on these whiskies would make anyone feel lucky? Sure, we like that reasoning, too.

The real reason?  There are just so many great American whiskies out there that the thought of trying to select only a few was simply too daunting.

For the Bourbon Purists

Each year, Master Distiller Brent Elliott explores the hallowed areas of Four Roses’ barrel warehouses, searching for the most resplendent, character-rich, and highly mature bourbons that will eventually comprise the brand’s annual limited-edition small batch release. Every year, the compass needle moves, meaning every release will taste noticeably different from those that came before it. Sometimes those differences are striking; other times they’re more subtle. But the differences are always there.

Unique. Layered. Mellow. Elegant. These are the four words that Elliott has chosen when describing the 2022 Limited-Edition Small Batch ($180). The recipe for this special blend includes two 14-year bourbons, a 15-year bourbon, and a 20-year bourbon; and as Elliott explains, it was the 20-year-old whiskey—which conveyed exemplary notes of fruit, barrel, and spice—and one of the 14-year bourbons—delivering exceptional smoothness and richness—that served as the backbone for this year’s blend. On the nose, dark cherries and brown sugar intermingle with sweet charred notes, while spicier flavors such as clove and allspice define the bourbon on the palate. At 54.5% ABV, this barrel-strength bourbon is stout and powerful, but it remains approachable straight from the bottle.

For Those Who Think They’ve Tried Everything

When St. George Spirits’ master distiller Lance Winters and head distiller/blender Dave Smith set out to create a special single malt whiskey to celebrate the distillery’s 40th anniversary this year, they wanted that commemorative spirit to represent the totality of St. George’s existence. To do that, they utilized several barrels that previously held some of the brand’s other products—apple brandy, for example, and umeshu, a stone-fruit eau-di-vie crafted in the Japanese style—to finish some of the whiskies that produce this one-off blend. At its core, the St. George Spirits 40th Anniversary Edition Single Malt Whiskey ($500) is comprised of malted two-row barley roasted five different ways: pale malt, crystal malt, chocolate malt, black patent malt, and alder/beechwood-smoked malt sourced from Germany.

The confluence of all of those things produces a whiskey that delivers wisps of cola and dark chocolate on the nose with subtle hints of brown butter, caramel and coconut. On the palate, the medium-bodied whiskey delivers layered flavors; however, milk chocolate, cinnamon, and light brown sugar take center stage.

There’s something magical about what a port finish can do to a whiskey. High West has understood this for quite some time, hence why since 2013 the distillery in Park City, Utah has produced a limited edition blend of straight rye whiskies finished in port casks. That annual release, A Midwinter Night’s Dram ($150), varies slightly from year to year, but never in any earth-shattering ways. At its core, the whiskey is a balance of vanilla, caramel, and cinnamon—all flavors coming from the rye and classic barrel aging—while the port barrel finish introduces notes of plum, dried fruits, and spice. Some previous batches have produced distinctive gingerbread comparisons, but the latest release (Act 10, Scene 4) includes a hint of candied orange and tastes like sticky toffee pudding in a glass. There may be no whiskey better suited for a pour this Christmas Eve.

For Those Who Believe Bigger Is Always Better

Back in the fall of 2013, the Buffalo Trace distillery introduced a new, cask-strength whiskey to its lineup. Initially branded Stagg Jr., this bold bourbon was effectively a younger, edgier iteration of the whiskies that, if left alone in the warehouse, would most often mellow into the 15- to 19-year old spirits that comprise George T. Stagg—a premium bourbon released once a year in scarce amounts.

Batches of Stagg Jr., on the other hand, are released twice a year, once in the spring and again in the fall. This year, the in-your-face bourbon sheds its Jr. moniker and is now known simply as Stagg. But just to be clear, George T. Stagg still exists as one of Buffalo Trace’s five Antique Collection expressions.

Over the years, Stagg ($50) has been bottled anywhere from 126.4 proof to 134.4 proof. The most recent release falls right in the middle, at 131 proof (or 65.5% ABV), but don’t let that misguide your expectations for this particular bourbon. The 18th batch of Stagg drinks even hotter than its ABV might suggest, but that doesn’t mean it’s not worth picking up or even seeking out. It just means you have to pick your spots with this aggressive, cask-strength American whiskey.

When poured neat, the bourbon offers up a fragrant bouquet of baking spices, with hints of ginger and clove balanced by a touch of vanilla. It’s quite spectacular. On the palate, however, the bourbon’s extreme overproof state hides much of that underlying character. In fact, most whiskey drinkers are likely to find this batch too hot to drink neat. A heavy splash of water—we’re talking a 2:1 spirit to water ratio—softens the whiskey an appropriate amount, opening it up to reveal hints of cherries and other classic bourbon flavors. In our opinion, this batch of Stagg shines best as the foundation for classic whiskey cocktails—it makes a kick-ass old fashioned—which reinforces Peter Kalleward’s philosophies for making winter whiskey cocktails.

For a Taste of the Tropics

If some nights you can’t decide what you’re in the mood for—particularly if you’re torn between the rich, sugarcane sweetness of an aged rum or the vanilla, caramel, and cherry cola notes of a well-crafted bourbon—you can get the best worlds with a pour of Puncher’s Chance – The Left Cross ($150), a 14-year bourbon finished for up to six months in ex-Jamaican rum casks. The whiskey presents a deep, layered flavor profile, one that opens up with dark brown sugar then transitions to hints of clove, ginger, and cardamom with a trace of blackstrap molasses. Ultimately, The Left Cross is a marriage of Caribbean sweetness and an edgier whiskey backbone, with subtle Caribbean spice notes that linger on the finish.

Headquartered in Georgetown, Kentucky just north of Lexington, Blue Run Spirits burst onto the scene in the fall of 2020. The startup company entered the spirits industry with the goal of producing whiskies that delivered in unexpected ways. It has since committed to building its own 35,000-square-foot distillery with an additional 20,000-square-foot rickhouse for barrel aging, but until that facility is complete—and its forthcoming spirits reach a satisfactory level of maturity—Blue Run will continue to partner with contract distilleries to conceptualize (and execute) unique products.

Blue Run’s latest release, Emerald Rye ($120), lives up to the brand’s desire to deliver surprises. It starts with a creamy mouthfeel, which is unusual for a barrel-strength whiskey of this strength (58.35% ABV), and then quickly transitions to flavors of Japanese peppers balanced by smooth caramel and butterscotch notes. The whiskey’s long warm finish is certain to please rye whiskey enthusiasts, as that’s where the characteristic black pepper flavors of the grain make their appearance. That warm, spicy finish also reflects the whiskey’s potency, though it doesn’t scream for water, despite the whiskey’s high alcohol content.

For an Authentic Sense of Place

If you’ve ever wondered how much the nuanced character of white oak can influence a whiskey’s overall flavor, the answers can be found inside a bottle of WhistlePig’s 15-year Estate Oak Rye ($300). Whereas the distillery’s flagship 10-year rye is aged exclusively in white oak barrels sourced from the southern United States (predominantly the Ozarks) and delivers a peppery spice balanced by sweet vanilla, butterscotch, and caramel flavors, the 15-year expression is finished in barrels constructed from estate-grown oak, which imparts an almost herbaceous quality, one that is bright, fresh, and pleasing. Yes, those butterscotch and baking-spice notes are still present; however, this older rye is characterized by flavors reminiscent of maple ginger candy and sweet, pink peppercorns—flavors pulled from the denser, hardier oak that matures more slowly thanks to cold New England winters.

For the Fusion Lover

Upon first sip of St. George Spirits’ Baller Single Malt ($50), a whiskey crafted in the Japanese style, you’ll likely pick up a bright, almost citrusy quality to the spirit. If you find yourself questioning this single malt’s characteristic fruitiness, wondering if it’s apricots or maybe nectarines that you’re tasting, even possibly plums or peaches, you’d be wrong on all counts. But you’d be close. That flavor is umeshu. More specifically, it’s the flavor imparted by a finish in casks that once held umeshu—an aromatic liqueur made from a small, tart stone fruit called ume. Although clean and dry on the nose, this whiskey delivers all of that bold fruit flavor along with a touch of vanilla and an underlying, faint smokiness, which is imparted through maple charcoal filtering. Baller is light and bright in flavor, making it an easier sipper, though it also makes a delectable highball.

Shaun Tolson is a freelance writer based in Rhode Island. When it comes to golf, he covers everything from architecture, course reviews, and travel, to equipment, gadgets and gear, and feature profiles. As a lifestyle writer, his expertise is rooted in the finer things in life — wine and spirits, luxury automobiles, private aviation, hotels & resorts, fine dining, and more.