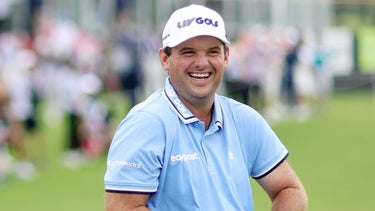 Patrick Reed, ahead of this week’s LIV Golf event, blasted the media and offered a new explanation to a story after a curious Europe stint.

Patrick Reed, ahead of this week’s LIV Golf event, blasted the media and offered a new explanation to a story after a curious Europe stint.

Patrick Reed, whom multiple outlets reported as saying his treatment at a DP World Tour event last month was “a slap in the face,” said Thursday those stories were “false reporting.”

In a press conference ahead of this weekend’s LIV Golf event in Saudi Arabia, Reed also said he did not play in another tournament because he “got decommitted,” though he had told one site that he withdrew after hurting his back due to a mattress being too soft. He then ended his session with reporters by saying that the Official World Golf Ranking was “not a true system if you’re not counting all the events and having points for everybody.”

Since LIV started in early June, Reed has played in five of six events, though with the Saudi-backed tour awaiting word whether they’ll receive OWGR recognition, he has continued to play tournaments on the DP World Tour. And he’s made headlines. Ahead of last month’s French Open, multiple sites reported that Reed told Journal du Golf that he was displeased with how he was treated at the event.

“It’s a slap in the face not to invite me to do a press conference here, or as happened in Wentworth, not to have me play the pro-am and all those things,” Reed told Journal du Golf, according to the Telegraph.

Three weeks later, on Thursday in Saudi Arabia, Reed then had this exchange:

“I was reading that you were a bit unhappy about some of your treatment at the French Open,” a reporter said.

“No, that was false reporting,” said Reed, who has resigned his PGA Tour membership. “Had nothing to do with the French Open. When I went over there, the players, the fans, the tournament, they treated me amazingly. It was an unbelievable time over there. Obviously I wish I had played better and did something, but no, they treated me really well, and that’s just something that is unfortunate about how the media tried to spin that that week, because when I was over there, everyone was excited to see me. It was great there, being with the guys, being with the players, and seeing fans I’ve seen in the past.

“No, it was a great week based off of fans, players and the people there at the golf course.”

A week after the French Open, Reed then withdrew from an event. He was scheduled to play in the Alfred Dunhill Links Championship, only to pull out due to a back injury that he told Irish Golfer was caused by his mattress in his hotel room in Versailles being too soft.

“I played well in the pro-am, but the pain in my back was getting worse,” he told Irish Golfer.

On Thursday, Reed had this exchange:

“Did you decide not to play Dunhill or was that not your plan?” a reporter asked.

“No, I was committed to Dunhill a while back, and then somehow — we were looking into it as well as the European Tour was looking into it,” Reed said. “Somehow I got decommitted and I wasn’t a part of the event. Because of that, when I was over in France, they were nice enough to get me back into the event, but logistically it was really too hard for me because Kevin was caddying for me because Kess was having that week off. So trying to get him a flight last minute to Scotland as well as trying to find hotels and kind of get everything all in order, it was just too much going on, too stressful.

“We opted to take that week off. But at the end of the day, I feel like it was the right thing to do. Body probably needed a little bit of a break because I was on a long run, and be able to go home and spend a little bit of time with the kiddos and hang out and also get my game a little sharper. I was able to kind of go out and play well last week.”

Reed’s press conference on Thursday then ended with a question on world rankings. Notably, LIV has applied for its events to receive OWGR points — which help players gain entry into majors — though the process can take up to 18 months. And while the specific criteria for a startup golf league trying to join the OWGR aren’t public, there are general requirements, among them a chance for golfers to qualify for the tour, an average of at least 75 players per tournament field, and scheduled 72-hole tournaments with 36-hole cuts — all of which LIV may need to negotiate. (For more on the subject, GOLF’s Dylan Dethier authored an excellent breakdown here.)

On Thursday, a reporter asked Reed this:

“I did a little research. Before the London event, your World Ranking points …”

“Today you’re 56,” the reporter continued. “My question is do you honestly think you’re the 56th player in the world?

“No, not at all,” Reed said. “The only thing I’ll say about all of that is the longer that you have competitive golf and competition with such great players and top players, the longer they’re playing events that aren’t getting World Ranking points, it just makes the World Ranking system insignificant. Let’s be honest; it’s not a true system if you’re not counting all the events and having points for everybody. If you’re competing for a golf tournament and they meet every criteria that you’re supposed to meet in order to have World Ranking points, then they should be getting World Ranking points no matter what. It doesn’t matter where you’re playing, who you’re playing, what Tour you’re on, anything like that.

“If you’re trying to say that we don’t deserve World Ranking points, this and that, then it’s a political battle, it’s not an actual true system. Last time I checked, every sport you play, it’s based off of competition and who you’re playing, how strong that field is and who wins, and you’re allocated certain things. It doesn’t matter what tour you’re playing on.”