‘That was a little weird’: Pro bizarrely hits ‘2 inches behind ball’ 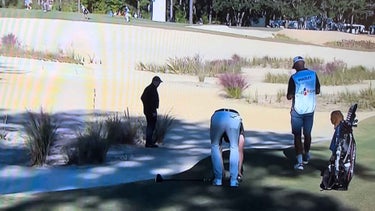 Cam Davis, during the third round of the CJ Cup, hit “2 inches behind the ball” on his tee shot on the 18th hole at Congaree Golf Club.

Cam Davis, during the third round of the CJ Cup, hit “2 inches behind the ball” on his tee shot on the 18th hole at Congaree Golf Club.

Cam Davis, in one motion, let go of his fairway metal with his right hand, looked down at the ground and thumped it with his club.

If you are wondering what the heck happened on his tee shot on Congaree Golf Club’s closing hole, Davis had the look of someone who was too.

“You don’t see that very often from world-class players,” announcer Steve Sands said on the Golf Channel broadcast. “Ball didn’t even make it to the fairway.”

That it did not. The 204-yard shot came up about 25 yards short during Saturday’s third round of the CJ Cup. Though if that doesn’t move you, this may:

— Over 234 tee shots on the 439-yard, par-4 18th, no one had also hit it shorter. Seamus Power’s ball traveled 207 yards during the first round, though it appears to have hit a tree, according to the PGA Tour’s ShotLink site. The average tee shot on the hole, meanwhile, has gone 286 yards.

— The stats will also tell you Davis can drive it; last season, he averaged 308.5 yards per poke.

— Davis is also contending, even after a late collapse in which he finished bogey-bogey-birdie-bogey-bogey-bogey. After a birdie at 12, he was two-under for the day and two back of the lead. He’ll start Sunday’s final round five behind leader Rory McIlroy.

So what happened on the tee shot?

A puff of sand from the ground after impact may tell you.

“Oooh man, he hit about 2 inches behind the ball,” analyst Trevor Immelman said on the broadcast. “That was a little weird, wasn’t it?”

Indeed. On the broadcast, Immelman even joked with on-course reporter John Wood, a former caddie, about a yardage estimation for the second shot.

“The ball didn’t even get to the fairway,” said Immelman, who was also Davis’ captain on the Presidents Cup’s International team. “Not even sure John could get a number on this. Give us your best caddie eyes over there, John.”

They both laughed. It was 214, according to the Tour’s leaderboard site.

From there, Davis hit left of the green, pitched on and two-putted for a bogey five. It was part of a two-over 73 and an eight-under total.

But that number may still be in play.

“I go down to eight-under, so that’s 13 players within five shots of the lead,” Immelman said on the broadcast when asked who could contend on Sunday. “And tomorrow, weather is going to be the warmest it’s been all week — high of 78. Not much wind at all. So the golf course is going to be much more gettable than it was in round three.”