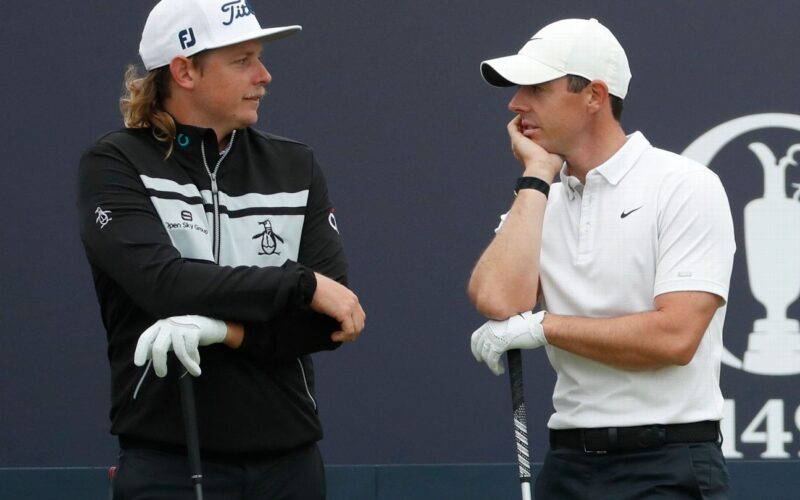 BEDMINSTER, N.J. — Henrik Stenson overcame a double bogey on his third hole Saturday with a long eagle putt and enough birdies for a 2-under 69 at windy Trump National Bedminster and a 3-shot lead over Dustin Johnson in the LIV Golf Invitational.

Two weeks ago, Stenson had just missed the cut in the British Open and was still the Ryder Cup captain for Europe. Now, the 46-year-old Swede is 18 holes away from a $4 million prize, more than double the biggest check of his career.

“It was a bit of a grind at times, and then we kind of came through with some really good shots and made some nice putts,” Stenson said.

“Overall, I’m pleased, and we’re at the races,” Stenson said.

Johnson has hit the ball consistently well for two days at Trump National and got enough putts to fall for a 69, leaving him three back and in the final group with Stenson.

Reed started the second of three rounds tied with Stenson and was keeping pace until he began the back nine with three straight bogeys. He rallied with an eagle late in his round to remain in the mix going into Sunday.

With fast greens, the wind made it tougher to score. Only 14 players shot par or better.

Phil Mickelson was not on that list again. Mired in a slump since a self-imposed four-month layoff, Mickelson could only manage a 73 and was tied for 40th, 15 shots out of the lead.

Since his return, Mickelson has a 74.5 scoring average, including the U.S. Open and British Open, with his lone score under par in the first LIV Golf event outside London.

Stenson is still new to this 54-hole event with a shotgun start, though good golf means he will be starting on the first hole for the second straight time on Sunday, a degree of normalcy for him. What hasn’t been normal is being criticized for pledging his support to Europe in March in becoming Ryder Cup captain and then signing with the rival league four months later.

Europe has stripped him of is captaincy for the 2023 matches in Italy.

“It’s certainly been a busy and emotional week, no question, or 10 days,” Stenson said. “But I was very happy with how I managed to channel the concentration and go out and play the best round of the season yesterday. Like I said, I didn’t have my best stuff today, but I was still focused and good attitude, and that’s what kept me in the ballgame.”

The Swede hasn’t lost his dry humor. Asked if he had a chip on his shoulder, Stenson replied, “I don’t see any.”

Johnson, who had been No. 1 in the world longer than any player since Tiger Woods, was the biggest player to sign with Saudi-backed LIV Golf two months ago as it was about to launch.

His last victory was in early 2021 at the Saudi International. He hasn’t won a PGA Tour-sanctioned tournament since the Masters in November 2020. He has finished eighth and fourth in his two LIV events, which was worth $1.9 million.

Johnson wasn’t aware when he finished on No. 1 that Stenson had made bogey on the par-5 18th to end his round, reducing the Swede’s margin to 3 shots.

“He’s definitely in reach for sure, especially around this course,” Johnson said.