‘Sometimes hitting it too well is a problem:’ Padraig Harrington explains links golf 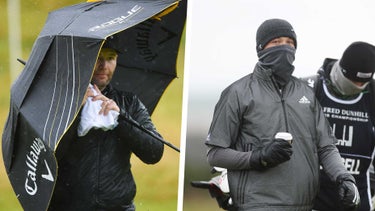 Padraig Harrington has racked up quite a bit of links golf experience in his career and says there are times where you can hit it “too well.”

Padraig Harrington has racked up quite a bit of links golf experience in his career and says there are times where you can hit it “too well.”

DP World Tour players have seen a lot of different types of golf this week.

With the tour seeing a return to the Old Course at St. Andrews — as well as Carnoustie and Kingsbarns — links golf is the forefront of the story again, and with that comes tales of the weather.

By now you’ve probably heard of Friday’s horrid weather conditions leading to equally horrid scores. One pro shot 18 strokes worse Friday than he did Thursday, only rebound Saturday with a 19 stroke improvement in better weather. Another shot 52 at Old Course … for just the back nine.

One golfer who, unsurprisingly, seemed immune to the conditions: 51-year-old Padraig Harrington.

Harrington turned in a one-under 71 at Kingsbarns Friday, one of just 10 under-par rounds on the day. He sits in a tie for 11th, eight shots off the lead, but just four shots out of second.

The two-time Open champion was asked on Saturday what makes a great links player compared to a more traditional setup the DP World Tour pros would be used to.

He broke it down pretty simply.

“To be honest we’re seeing a lot more golf,” Harrington said after his third round. “Professional golf goes to really nice conditions, everything perfect. And there’s a big pool of players now playing and if any one of them plays well, they are great. Whereas you go to links golf, it takes more than swinging a golf club to get around a links golf course.”

Harrington is tied with Rory McIlroy going into the final round and the pair will even walk the Old Course together on Sunday. It’s no secret the two will play very different games, despite Harrington being one of the longer seniors on the PGA Tour Champions.

But at the first hole Saturday, maybe still reeling from a second round 74, or making the wrong decision, or simply hitting a poor shot, McIlroy saw his second shot find the bottom of the Swilcan Burn short of the green.

He played the shot from the left side of the fairway, near the famous Swilcan Bridge, and looked to have hit about 10 feet below the cup for birdie before the spin kicked in and zipped the ball right back into the water.

“Sometimes hitting too well is a problem,” Harrington said about the shot. “I saw on TV Rory put it in the water at the first. You don’t want to have that strike at times. You have to take your spin off and you have to play sensible shots … I hit 9-iron [on one] just so it would not spin back in the water. You have to be clever at times with not hitting it too well. Is that a terrible thing to say?”

That’s not to say links golf never requires a perfectly struck shot. It’s actually fairly rare to see a shot like McIlroy’s at the first spin back on a links course.

The 18th at Carnoustie, is a great example of a hole where spinning back into the water would be far away from anyone’s mind. “Home” is a brutally challenging 499-yard par-4, perhaps best remembered for Jean van de Velde’s triple on the 72nd hole of the 1999 Open Championship to fall into a playoff and eventually lose.

Needless to say he has reason to demand an excellent shot from himself, but as he says, that’s links golf too.

“The first day, I had 230 into 18 green at Carnoustie, and I’m hitting 4-iron and there’s trouble everywhere,” he said. “You just have to hit a great golf shot. Links golf asks that. Sometimes it asks to you hit a great shot and sometimes it asks you to be sensible, play the odds and play the averages and make sure you don’t miss that putt.”