Smith, eying No. 1, 2 shots back in playoff opener 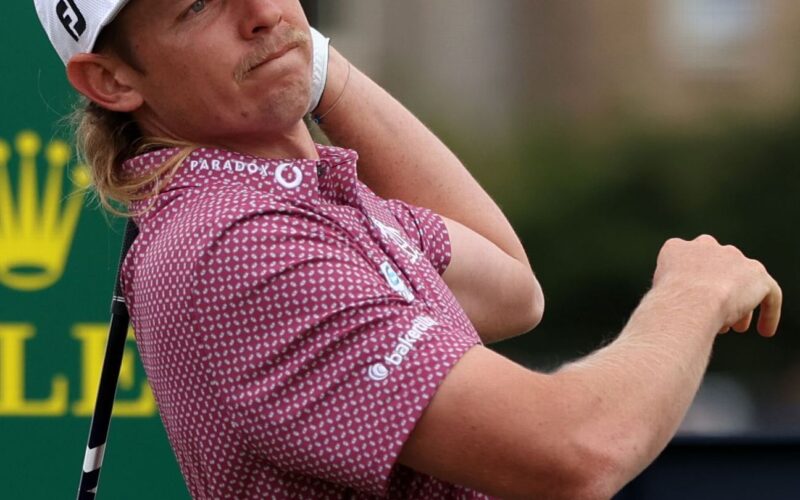 MEMPHIS, Tenn. — British Open champion Cameron Smith has spent all week ignoring queries about reports he will be the latest to leave the PGA Tour for Saudi-funded LIV Golf. His only concern was trying to win the FedEx Cup playoffs.

Now there’s another perk at stake: No. 1 in the world.

Even as J.J. Spaun picked up a pair of late birdies for a 2-under 68 to main a one-shot lead over Sepp Straka, and Will Zalatoris moved into contention for his first PGA Tour title, Smith is who got everyone’s attention Saturday in the FedEx St. Jude Championship.

He birdied his last hole for a 67, leaving him among those two shots out of the lead and fully aware that a win takes him to No. 1 in the world.

“That’s been one of my goals probably since the start of the year is to try to get to that top spot,” Smith said. “Try and chase it down.”

A week that began with a federal judge delivering a blow to LIV Golf by denying the request from three of its players to be part of the postseason could very well end with a new No. 1 that appears headed for the rival series.

Distractions don’t seem to be a problem for the Aussie, and there is no shortage of them.

“There’s definitely been a few more, but for me, I’m just trying to hit the best shot I can,” Smith said. “That’s what I’m here to do is to hit good golf shots and make birdies.”

Spaun had a two-putt birdie on the par-5 16th and holed an 18-foot birdie putt on the next hole to claim the 54-hole lead a 13-under 197. Straka was right there with him until he failed to save par from the bunker on the 18th for a 68 that left him one shot behind.

Both are first-time winners on the PGA Tour this year, and a victory in a FedEx Cup playoffs carries even more weight — $2.7 million to the winner and a guaranteed spot at East Lake for the FedEx Cup finale.

Zalatoris is just as hungry for a win. He has been a tough customer in the majors, losing in a playoff at the PGA Championship and finishing one back in the U.S. Open. He is No. 14 in the world. And he has yet to win on the PGA Tour.

Zalatoris opened with a 71 that put him in such a hole that even his fiancee wanted to know their plans if he didn’t make it to the weekend.

“I told her, ‘Let’s cross that bridge when he get there,'” Zalatoris said with a smile. He decided to let his new caddie, Joel Stock, read putts in their second official round together. Zalatoris shot a 63 and followed with a 65 on Saturday.

He also was two behind, along with Trey Mullinax (66).

As for the chase to the next playoff event, consider Tyler Duncan. He is No. 118 in the FedEx Cup, and only the top 70 move on to the BMW Championship next week in Delaware. Duncan had a 67 and was tied for sixth. He was three behind, and even if he doesn’t win, he can move on if he can hold his position.

Ryan Palmer had a 32 on the back nine to salvage a 69 leaving him on the cusp of the top 70 that will advance.

There are 16 players separated by four shots, a group that includes Sam Burns and Tony Finau. A winner in his last two starts, Finau ended his streak of 11 rounds at 68 or lower. He made a bogey on the last hole gave him a 69, leaving him four behind.

No one stands out like Smith, for so many reasons. Not only is it his first start since being introduced at St. Andrews as the “champion golfer of the year,” the Daily Telegraph reported Tuesday that he had signed with LIV and would join the defectors outside Boston after the Tour Championship is over.

Smith has steadfastly refused to talk about it.

“I’m a man of my word and whenever you guys need to know anything, it’ll be said by me,” Smith said Tuesday. That was shortly before a California federal judge denied a request by three LIV golfers to play in the FedEx Cup playoffs.

Still, the Saudi talk and the disruption in golf is hard to ignore. Palmer was finishing up his interview and discussing the merits of trying to move into the top 70 and stay in the hunt for the top 30 who advance to the Tour Championship at East Lake.

Smith was on deck, standing within earshot, about 10 feet away. Palmer became more passionate about the FedEx Cup playoffs, and it probably wasn’t a coincidence.