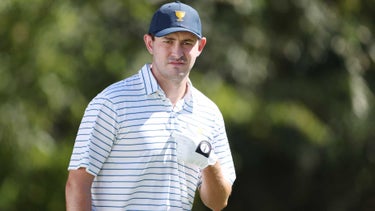 It’s officially time for the Shriners Children’s Open in Las Vegas. Here are four picks we love at TPC Summerlin.

It’s officially time for the Shriners Children’s Open in Las Vegas. Here are four picks we love at TPC Summerlin.

What happens in Vegas doesn’t always stay in Vegas.

Plenty of stuff leaves town, too.

On Sunday afternoon, for instance, the winner of the 2022 Shriners Children’s Open will walk off with $1.4 million, a healthy chunk of the robust $8 million purse.

The venue is TPC Summerlin, where birdies have historically come in bunches, and the field is the strongest of the new season, headlined by world number-four Patrick Cantlay.

Cantlay is the current betting favorite, but defending champ Sungjae Im is high on the board, too, followed by Max Homa, Aaron Wise and emerging star Tom Kim.

Whatever happens in Vegas, it is always followed closely by Andy Lack, GOLF.com’s expert prognosticator. As he does each week, Lack has provided us with his four favorite plays, each a different category of wager. You’ll see those below.

As for our format, we’re keeping it the same by asking Lack to supply us with his four favorite wagers. And because we like to track public opinion, too, we’re also including data from Chirp, a free-to-play mobile platform (and GOLF.com affiliate) that allows fans to engage with the action through a range of games. You can check out those Chirp stats at the bottom of this page.

We’ve seen team competitions help springboard players to greater levels of success, and even in a losing effort, Davis was impressive in the Presidents Cup. The young Australian has quietly turned into one of the better wedge players and Bentgrass putters in the world, two skill sets that should serve him well at TPC Summerlin. Ranking third in this field in birdies or better gained, Davis has shown an affinity for easier scoring tournaments, with a win at the Rocket Mortgage Classic, and multiple strong finishes at the American Express, 3M Open, and John Deere Classic. Davis gained 5.9 strokes ball-striking in his last appearance at TPC Summerlin, and I expect him to improve on that mark and pick up PGA Tour win number two in the desert.

I will always have a soft spot for Hoge after correctly predicting his breakthrough victory last year at Pebble Beach, another West Coast golf course that de-values driving and places a greater emphasis on the second shot, which often comes with a wedge. It should come as no surprise that Hoge has similarly found success at TPC Summerlin, with a 14th and a 24th in his last two appearances. The 33-year-old has statistically been the best short-iron player in this field over the last year, and he’s coming off a 12th-place finish at the Fortinet where he gained 4.2 strokes on approach. I expect him to be firmly in the mix come Sunday afternoon.

I will continue to ride Svensson until the wheels fall off. The Canadian is coming off a ho-hum 54th at the Sanderson Farms, where he still gained 2.7 strokes ball-striking and fell victim to a faulty putter. Svensson has turned into such an impressive ball-striker that he’s a threat to finish top-40 even in poor putting weeks. You’ve probably noticed by now that wedge play is a theme for me this week, and the 28-year-old ranks seventh in this field in overall proximity from 100-175 yards over the last year. Bentgrass has historically been Svensson’s strongest putting surface as well, and I’m expecting some improvement with the flat stick.

Hadwin deserves a look on the basis of course history alone. The Canadian has five top-35s, and three top-10s in six appearances at TPC Summerlin, including a sixth-place finish last year. Something about these greens just seem to click with Hadwin, as he has never gained less than 1.8 strokes putting here. While I trust his putter here, strong iron play is also essential, and Hadwin is coming off a performance at Sanderson Farms where he gained 3.6 strokes on approach. Taylor Montgomery, on the other hand, remains one of the most over-valued players on a week-to-week basis. Through two starts on the PGA Tour this season, he has gained over 16 strokes putting. I have a hard and fast rule about never chasing putting, and Montgomery’s statistical profile has fade written all over it. Expect Hadwin to build upon his robust record at TPC Summerlin, while Montgomery’s flat stick falls back to earth.

The Trifecta game on Chirp calls for users to make three picks: a favorite, a contender, and a long shot. Nearly 500 Chirp users have already made their choices. Here’s a look at the three top vote getters in each category, along with the percentage of support they have received. (Want to play for yourself? Click here!)