Shane Lowry snapped his putter. Then things got unusual. 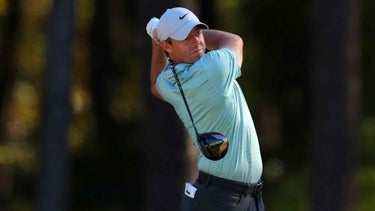 Shane Lowry’s day during the first round of the CJ Cup was … different. It included a snapped putter, the rules and a road trip.

Shane Lowry’s day during the first round of the CJ Cup was … different. It included a snapped putter, the rules and a road trip.

Shane Lowry, the day after his ordeal through southeastern South Carolina, may have summed it up best.

“It was good fun, and there’s always something,” he said on Golf Channel on Friday. “It’s never, never a dull moment.”

Indeed. There was an accident.

Then a rules scenario.

Then a shopping trip.

Then a viral moment.

All during a tournament, the CJ Cup. To lay it all out, we’ll go chronologically.

Noonish ET Thursday, 9th hole, Congaree Golf Club, Ridgeland, South Carolina: We begin here, during the first round, after Lowry hit his approach into the par-4. The accident soon followed. He tells the story well.

“So I was pulling my putter out of the bag and I pulled it out quite quick, and as it came out, it fell,” Lowry retold on Friday. “As it fell, I tried to like flick it up with my foot, but like kind of not too like aggressive or anything, just kind of tried, because the shaft was like this and tried to flick it up with my foot, and I caught it like right where the graphite meets the steel on those shafts and it just snapped in half.

“I was like, yeah. I had to like pick Matt Fitzpatrick off the ground from laughing. Yeah, it was interesting. I didn’t know what was going to happen, I didn’t know if I was going to be able to use it again. It was absolutely accidental; there was no anger or anything. It was like very, very strange. It was disappointing because I like that putter; that’s the one I won with a few weeks ago, and I kind of was starting to like it.”

Noonish-1 p.m.-ish, 9th and 10th holes, Congaree Golf Club, Ridgeland, South Carolina: Lowry putted with his wedge. On 9, he somewhat incredibly rolled in a 7-footer for par. On 10, a 5-footer.

1 p.m.-ish, 11th green, Congaree Golf Club, Ridgeland, South Carolina: Here we crack open the rule book, where Model Local Rule G-9 states: “If a player’s club is ‘broken or significantly damaged’ during the round by the player or caddie, except in cases of abuse, the player may replace the club with any club under Rule 4.1b(4).”

Lowry’s putter was broken and significantly damaged by Lowry. It wasn’t a case of abuse.

He replaced it, with an assist to his agent.

And an unknown Congaree member.

“I used my lob wedge for two holes, and then I used — my agent [Brian Moran] went to the member’s bag storage and just pulled a Scottie Cameron putter from there and I used that for the back nine,” Lowry said. “And like my first putt was on the 11th green, and I was like I have no idea what’s going to happen here. It was a strange hour or so. Yeah, it was interesting.”

A reporter asked: “Was it daunting in any way to stand on 11 yesterday with a new putter on these greens?”

Does the member know that their putter was used by the 2019 Open Championship winner?

“I actually don’t know, I have no idea,” Lowry said. “We put it back anyway.”

3 p.m.-ish, Congaree Golf Club, Ridgeland, South Carolina: Lowry signed for his three-under 68 — which included two birdies with the new putter — and thoughts turned to the three days ahead. He could play with a putter. Or he could play with his, or at least a replacement of the model. But the equipment trucks were gone.

They could get him a White Hot OG 2-Ball putter with a graphite shaft, with a Traxion Pistol GT putter grip. That day, too.

He would have to drive to the PGA Tour Superstore, in Bluffton, South Carolina.

“My shopping experience was great down at Bluffton,” Lowry told Golf Channel. “I had to get in the car and drive. I drove an hour down there yesterday evening.”

Late afternoon Thursday, PGA Tour Superstore, Bluffton, South Carolina: Lowry bought — yes, bought; he posted the receipt to his social media channels — his new putter, along with another one, you know, since he was there and all.

On social media, at 4:59 p.m., Lowry shared a pic of him in front of the store, with both putters raised.

He posted a video, too. He was at the cash register, in the same golf clothes — a blue hat, a blue shirt, gray pants and white shoes, with all of the sponsor markings — he had worn at Congaree.

“Having a major champion … doesn’t suck,” the cashier said in the video as he rung Lowry up.

After his round on Friday, Golf Channel’s Todd Lewis asked him this:

“Give me your impression of the staff there as a major champion walking into the store looking for a putter.”

“I think they knew I was coming because — but they told them my caddie [Brian Martin] was coming, but I wanted to go down myself and … they were really nice and they couldn’t have been any more helpful, and I think the customers were a bit — because I went straight from the course, so I was in my golf gear,” Lowry said. “The customers were a bit like, you know, a couple of double-takes here and there. It was fine.

“It was good fun and there’s always something. It’s never, never a dull moment.”

Friday, Congaree Golf Club, Ridgeland, South Carolina: In the meantime, Odyssey shipped Lowry additional putters, and by the time he teed off at 12:25 p.m. on Friday, he had one of those in the bag.

The PGA Tour Superstore purchase stayed in his locker.

From there, Lowry shot a four-67, and he’ll start Saturday’s third round four shots out of the lead.

“Look, it was one of those, it was kind of a bit of a freak thing,” he said. “It is what it is. Thankfully, I did OK with the other putter and I did OK today as well.”