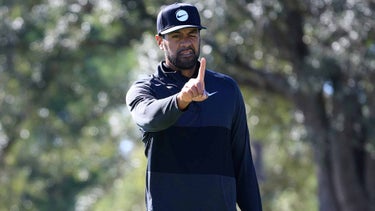 Our experts thinks Davis Riley is set for a solid showing this week in one of his favorite parts of the country.

Our experts thinks Davis Riley is set for a solid showing this week in one of his favorite parts of the country.

But there’s still one stop remaining in the PGA Tour’s 2022-23 fall calendar: the RSM Classic at Sea Island, In Georgia.

Tony Finau is in the field, fresh off a runaway win last week in Houston. He’s also the runaway favorite on the betting board, followed by Brian Harman, Jason Day and Seamus Power.

Andy Lack has some suggestions. In keeping with his weekly custom, Golf.com’s expert prognosticator has crunched the numbers, assessing both the course and player stats to arrive at his four top picks for the event: a winner, a top 10, a top 40 and a matchup.

Lack does this for a living. But because we also like to see where public sentiment is leaning, we’re also sharing data from Chirp, a free-to-play mobile platform (and Golf.com affiliate) that gives fans a range of ways to engage in the action.

You can see that info, along with Lack’s picks, below.

Coming off a disappointing missed cut at the Mayakoba Championship, Hoge is primed for a bounce back on a course that has been kind to him over the years. With three top-25 finishes, two-top-10s and a fourth-place finish here last year, the 33-year-old clearly feels at home here. This should not come as a surprise, as the TCU product is one of the most accurate drivers in this field, and he remains the number one wedge player in this field as well. His breakthrough win last year at Pebble Beach came at another coastal, wedge-heavy golf course. I expect him to find similar success this week in Georgia.

While Riley’s course history (76th-MC) at Sea Island certainly leaves a lot to be desired, it’s worth mentioning that the Mississippi native finished 25th and 11th at this course at the 2016 and 2017 SEC Championship. Riley played his collegiate golf at Alabama, and many of his best PGA Tour putting performances, including his two career Korn Ferry Tour wins, have come on Bermuda greens. Coming off a solid 27th at the Houston Open where he gained over two strokes off the tee and 3.5 strokes on approach, look for the 25-year-old to carry his momentum back to his favorite part of the country.

Similar to Hoge, Lower is a player I am keen on this week due to his elite mid-to-short-iron play. After Hoge, Lower ranks second in this field in long-term proximity from 125-175. The 33-year-old is coming off a missed cut last week in Houston, but now he returns to a course that suits him better. Lower has already racked up top-20s this fall swing on shorter, positional, wedge-heavy golf courses such as Port Royal, TPC Summerlin, and Silverado, and I expect his strong form to continue this week.

While I have my concerns about Kuchar’s ability to close out a tournament at this stage of his career, he remains a rock-solid option to finish in the top 30 any given week. The nine-time PGA Tour winner has finished 30th or better in all three of his starts this fall swing, and now he returns to a course where he’s had six top-30 finishes in eight appearances. Taylor Moore, on the other hand, is a more volatile option. He struggled mightily in Houston last week despite catching the favorable side of the draw, and he is a well-below-average wedge player. I expect the veteran to roll in this matchup.

As its name suggests, the Trifecta game on Chirp calls for users to make three picks: a favorite, a contender and a long shot, all categories based on the Official World Golf Ranking. With hundreds of votes already in, here’s a look at the leaders in each category, along with the percentage of support they have received. To get in on the fun, sign up to Chirp for free here.