Rory McIlroy was an absolute force in 2022, and not just on the course 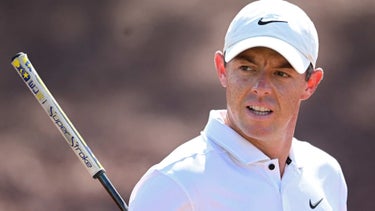 In the fight against LIV Golf, Rory McIlroy delivered words with the same precision that he does a driver head to the back of a golf ball.

In the fight against LIV Golf, Rory McIlroy delivered words with the same precision that he does a driver head to the back of a golf ball.

Remember when we thought a pandemic season two years ago was crazy? Man, 2022 had it all. The return of Tiger Woods, the formation of a controversial golf league, the disappearance (and reappearance) of one of golf’s most beloved figures and so, so much more. But now let’s take a breath. Here, we’ll look back (and look ahead) at the 10 most memorable moments of 2022.

No. 10: Nelly Korda’s rollercoaster year ended with promise for 2023
No. 9: How Tom Kim stole the show at the Presidents Cup
No. 8: How Lydia Ko rediscovered her game in 2022

No. 7: Rory McIlroy was an absolute force in 2022, and not just on the course

When Rory McIlroy was 11, his parents Gerry and Rosie shipped him off from their Belfast-area home to Utah to spend the summer with a family they knew through junior golf. When Rosie and Gerry reconvened with their son eight weeks later, he had bleached his curly locks and his accent was tinged with an American twang.

“What could they do?” Michael Bamberger wrote in a 2009 Sport Illustrated profile of McIlroy. “He was doing what they wanted. He was doing his own thing.”

The Rory, who in 2022, slung the PGA Tour over his shoulder and carried it through the most tumultuous year in the history of professional golf. Jay Monahan’s knight in shining armor? More or less, yeah, although in the golf establishment’s fight against the stunning ascent of LIV Golf, McIlroy wielded not a sword but a microphone. He has long been regarded as one of the game’s more thoughtful players, but this year more than any other McIlroy showed that he can deliver words with the same force and precision that he does 460cc’s of titanium to the back of a golf ball.

Why did he assume the role? One, because deep in his bones he believes the dissension and fracture that LIV has brought to the pro game is a fundamentally bad thing. Two, because he believes legacy and history matter. Three, because, well, if not him, then who? Tiger’s not built for advocacy and even if he was, he’s not on Tour enough to evangelize. JT? Rahm? Scheffler? They’ve all spoken on the Tour’s behalf but none has McIlroy’s stature. It had to be Rory. And not just because he needed to defend himself and his peers but also those who don’t have access to press-conference podiums and might never. “My life is not going to change whether people go to LIV or they don’t,” McIlroy told Ewan Murray of The Guardian in October. “But I care. It mightn’t change our life but it will the guys grinding their asses off to get a Tour card. There’s a lot of people in the game who don’t have the voice or the platform I have so I am trying to speak up for them a little, too.”

A little? McIlroy was asked LIV questions at virtually every turn in 2022 — from Augusta to Brookline to Tulsa to St. Andrews — and just about always responded with candor and clear-headedness. After winning the Tour Championship in August, he was asked about the upcoming DP World Tour’s BMW Championship, where many LIV golfers were in the field. “It’s going to be hard for me to stomach going to Wentworth in a couple of weeks’ time and seeing 18 of them there,” McIlroy said. In November, McIlroy said the potential for any kind of PGA Tour-LIV accord would require new LIV leadership. “Greg needs to go,” he said of LIV CEO and commissioner Greg Norman.

McIlroy wasn’t just talking tough. Behind the scenes, he was also pulling levers, working with Tour brass to offer richer payouts and bonuses and a more favorable schedule for the top players. Much of that plan was hatched at a now-fabled Aug. 16 players-only confab at the Hotel du Pont, in Wilmington, Del. — a closed-door union meeting with McIlroy and Woods in the roles of Sheeran and Hoffa.

“What Rory has said and done are what leaders do,” Woods said earlier this month at the Hero World Challenge. “Rory is a true leader out here on Tour. The fact that he’s actually able to get the things he said out in the public eye, be so clear minded with it and so eloquent with it, meanwhile go out there and win golf tournaments on top of that, people have no idea how hard that is to do, to be able to separate those two things. … Everyone respects him and they respect him because not just his ball-striking, his driving, but the person he is.”

You’d have to dig deep in the transcript archives to find Woods speaking so glowingly about one of his fellow players. Then again, Woods knows better than most how hard it can be to play golf at a high level in the midst of a tempest.

McIlroy didn’t just play at a high level in 2022 — he played what he described as “the most consistent” golf of his career. In 22 starts across the PGA and DP World tours, he had 12 top-5 finishes and three wins; he placed in the top 10 at every major, won both the FedEx Cup and Race to Dubai and ascended to the pinnacle of the world ranking. After claiming that third title, the CJ Cup, he said: “If someone had told me on the Friday night of the Valero Texas Open when I missed the cut that I would be world No. 1 by October, I would have asked them what they were smoking.”

Fittingly, McIlroy saved some of his finest play for the Old Course at St. Andrews, where history and legacy ooze out of every spike mark. After a third-round 66, McIlroy entered Sunday in a tie for the lead with Viktor Hovland, four clear of a pair of Camerons (Smith and Young). McIlroy was winless in the majors since 2014, but on this golfing holy land, with virtually every organism on the property urging him on, that drought seemed primed to end Sunday, as if preordained by Old Tom and the other golfing gods. Alas, it wasn’t to be. McIlroy could muster just two birdies and was eclipsed by the young Aussie, Cameron Smith, whom all week had been rumored to be on the verge of announcing a LIV deal. Smith evaded the question in Scotland, but several weeks later, he was gone.

McIlroy, meanwhile, was left to piece together what went wrong. It wasn’t a meltdown, but he also didn’t do enough. An untidy chip here, a missed putt there, all adding up to yet more major heartbreak. “I couldn’t face it,” he told Paul Kimmage in a Sunday Independent interview published last month. “I just couldn’t. I wanted to crawl into a hole.” Of he and his wife Erica, McIlroy said, “We stayed in the [hotel] room and ordered some food and a bottle of wine.”

That week in St. Andrews epitomized the Rory Experience: soaring highs, crashing lows, admiration, adulation, honesty, hopefulness, uncertainty. But it did not define his year. He accomplished too much to harp on one letdown, no matter how excruciating it felt in the moment. Golf has a new leader, and he does not preside in a board room or have a yacht named “Aussie Rules.” He’s a former prodigy from the Belfast suburbs. Living for himself. Playing for himself. Thinking for himself.

Give the gift of InsideGOLF for only $20!