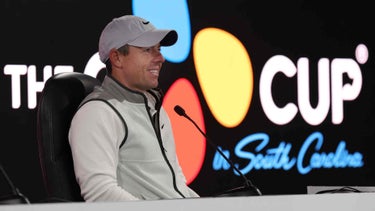 Rory McIlroy asks 20-year-old Tom Kim about beer after their first round at the CJ Cup, and it’s everything.

Rory McIlroy asks 20-year-old Tom Kim about beer after their first round at the CJ Cup, and it’s everything.

Tom Kim asked about succeeding, and Rory McIlroy asked about celebrating when you do, and you may be asking if their Q and A can continue.

Kim started things, and his 31-word question, ahead of this week’s CJ Cup, is a fine introduction to him. It was all Kim. He’s as much of a 20-year-old as he is talented, meaning that while he’s won twice on the PGA Tour since early August, he still gives off the aren’t-you-Rory-McIlroy (?!) vibe.

“Rory,” Kim began during McIlroy’s pre-tournament press conference, “I have a question for you. What’s it like having so much success as a young player? Coming out and many years on tour, how do you manage all that?”

McIlroy paused for a second, then answered in the style of the one-time wunderkind/current superstar/speaker of the PGA Tour house that the 33-year-old is.

“I didn’t have as much success as you’re having at such a young age,” McIlroy started. “Like I think when you start to have success at a young age, you’re going to — I think the biggest thing that I realized is managing your time. You’re going to be pulled in so many different directions.

“You’ve got one, two, three, four, I can see five sponsors on you at this point, right? So it’s just trying to manage your time to realize what got you to this position, right? Why are you a two-time PGA Tour winner; why are you such a great player? And it’s the time that you put into it and it’s the practice, it’s not losing sight of that. I think that’s the thing.

“I was speaking here just before you came in that I’ve almost found it easier to get to No. 1 in the world than staying there. I think staying there is harder. I think you’ve got a bull’s-eye on your back. You’ve got to work harder; everyone’s coming after you. That’s the one thing I would say is just managing your time and not forgetting why you’re in this position and why you’re so lucky to get to play with me the next two days.

“And that was a joke that went over everyone’s head.”

Good stuff. And McIlroy was right. He and Kim, along with Rickie Fowler, were grouped together during Thursday’s CJ Cup first round. Each shot five-under 66s.

Then Golf Channel’s Todd Lewis put them in front of the cameras.

And McIlroy wanted to know about beer.

“Tom, this is the first time you and Rory have been in the same group on the PGA Tour,” Lewis started as Kim began to smile, with McIlroy inches to his left. “You have played a practice round together. How would you describe your strengths out there today?”

“I mean, it was really, really fun for me,” Kim said. “Obviously our lines were very, very different off the tee. [McIlroy looked away at this point.] I can’t say enough about how amazing it was to see his game, and it was a privilege. So we had some fun out there and obviously playing well helps.”

“Rory, yesterday during your press conference, Tom came in and kind of hijacked the press conference a bit and asked you a question,” Lewis said. “I’m going to give you a chance to return the favor. Is there something you would like to ask Tom?”

“Ohhhh, jeez,” McIlroy said. “Thanks for putting me on the spot here, Todd. [Kim raised his hand to face at this point.] Yeah, I have no idea. [Kim laughed at this point.] I don’t know what to ask him. I said, oh, when do you turn 21? This isn’t a question; it’s a conversation. He goes, oh, I turn 21 next June. I’m like, I’m going to be 34 years old before he’s allowed to have a drink in the United States so … Yeah, that’s a — your two PGA Tour wins, did you sneak a beer in there or no?”

“You did not?” McIlroy said.

“All right, when you turn 21 and you win your next PGA Tour event, I’m going to bring you out for a few drinks,” McIlroy said.

“All right, Rory’s buying. How about that?” Lewis said.

After another question, the broadcast then went back to the golf.

“The PGA Tour, Trevor, is in very good hands, the present and the future of the Tour right there,” announcer Steve Sands said.

“Yeah, it sure is,” analyst Trevor Immelman said. “I will say that it appears Todd’s job is safe. McIlroy … think on his feet and come up with a question.”