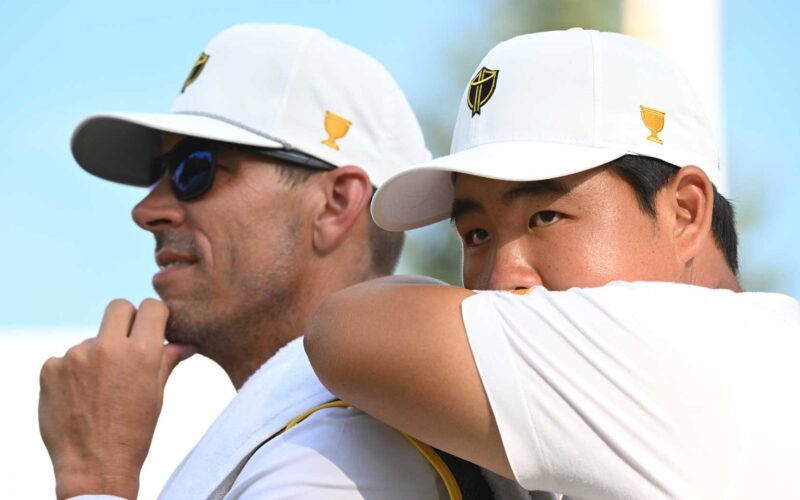 On Tuesday of Presidents Cup week, Max Homa was asked if there’s anybody on the International team he’d relish the chance to play against.

“Joe Skovron is one of my best friends and he’s caddying for Tom [Kim] this week,” he said. “I’d love to be the in that group, because Joe bleeds the red, white and blue, and he’s on the International team now.”

“We can give him grief about that,” Homa continued. “He’s been on all these teams so many times; it’s funny giving him a little bit because he’s wearing different clothes.”

You may have done a double take when you saw Skovron on the weekend broadcast; he’s among the most recognizable caddies in the business thanks to his tenure on Fowler’s bag. Their partnership lasted from 2009 through this year’s Wyndham Championship and included five PGA Tour wins. “It wasn’t what either of us wanted,” Fowler said of the split, which the pair have described as mutual and amicable. It was fitting that Kim was the winner at the same event that was the Fowler-Skovron swan song, earning his way onto the PGA Tour — and the Presidents Cup team — in the process.

Kim and Skovron played every match. And while Kim was disappointed in their 2-3 record, he delivered arguably the moment of the tournament when he holed the winning putt on the 18th green Saturday evening to take down Patrick Cantlay and Xander Schauffele.

Skovron was more effusive about Kim’s play than Kim himself.

“I was so impressed,” Skovron said post-round. “He loved it. He loved the big moments and I loved how he responded. That putt on 18, that whole thing, the energy and feeling like we’re back in it, him doing that and finishing off that match against those guys, they’re such good players, that’s the one I’ll remember.”

As for the strangeness of joining the Internationals and playing against his buddies on Team USA?

“It was definitely different, but y’know what, great group of guys,” Skovron said. “I think once you get on a team, it’s not really about what country you’re from, it’s more about what team you’re with and representing that team and being all in, trying to win.”

Asked about his future with Kim, Skovron stuck to caddie code and played it cool.

“You’d have to ask Tom about that,” he said.

But it was clear from watching that the two were a comfortable pair. Kim wasn’t afraid to rely on his guidance; Skovron joined him before every tee shot, they talked through every decision and congregated afterward to celebrate or commiserate. More than once, Kim would end up with his arm or head on Skovron’s shoulder. In other words, all signs suggest this won’t be a one-and-done.

“It was the first week and we had some success,” he said. “But even in a week, he’s become a really good friend of mine. So I think we’ll be working together for a while.”

Kim’s win came with Jacob Fleck on the bag; the two were a team for most of 2022. But two starts later he had veteran caddie James Edmondson on the bag at the BMW Championship before Skovron took over at the Presidents Cup. (For his part, Fowler’s next start came with veteran looper Ricky Romano.)

On the PGA Tour, no player-caddie pairing is ever set in stone. But it sounds like these two will be running it back.