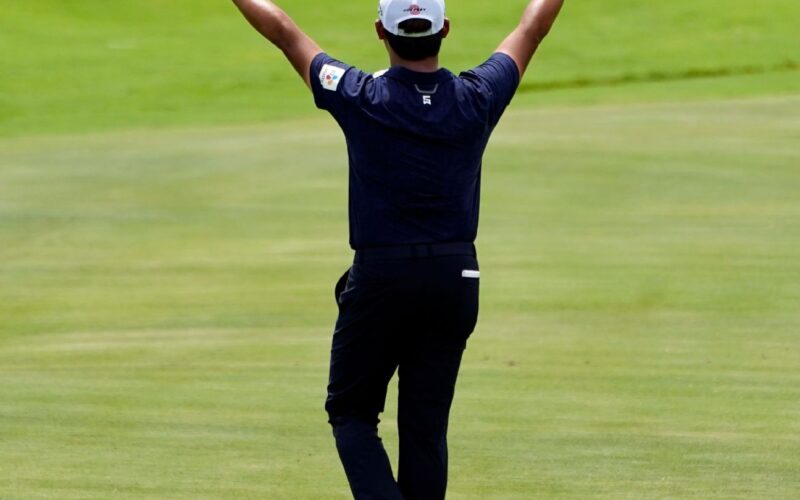 MEMPHIS, Tenn. — Rickie Fowler was the last man in the field for the FedEx Cup playoffs, but he’s making the most of it with a new caddie and new putter in his bag.

Fowler carded a 5-under 65 in the first round of the FedEx St. Jude Championship at TPC Southwind on Thursday. He was tied for fifth after the morning wave of players. If he can stay there over the next 54 holes, he would probably advance to the second leg of the playoffs next week at the BMW Championship at Wilmington Country Club in Delaware.

It was the first competitive round Fowler had played since parting ways with caddie Joe Skovron, a childhood friend who had been on his bag since turning pro in 2009. Cobra-Puma representative Ben Schomin, who caddied for Bryson DeChambeau last year, is working with Fowler this week.

“I felt great,” Fowler said. “It was more so going into this week not having Joe with me, obviously an amazing partnership over the years, but it was going to be more about me taking ownership and putting more of a workload on myself and more accountability. I still had plenty of [Skovron’s] voice and one-liners and stuff in my head, so he wasn’t on the bag but he was definitely present.”

Fowler nearly missed the FedEx Cup for the second season in a row after missing the cut at last week’s Wyndham Championship. He returned home to Jupiter, Florida, and played golf Sunday, while the playoff field was determined in the final round of the Wyndham Championship in Greensboro, North Carolina.

“There was nothing I could do, so I was out playing golf,” Fowler said.

Fowler ended up sneaking in as the last qualifier, mostly because nine LIV Golf players weren’t eligible after the PGA Tour suspended them.

Fowler, 33, is a five-time winner on the PGA Tour, but his last victory came in the 2019 WM Phoenix Open. He is currently ranked 167th in the Official World Golf Ranking; he was 85th at the end of 2021. He has just one top-10 finish in 21 starts this season — at the CJ Cup @ Summit in October — and missed the cut nine times.

There have been many reasons for Fowler’s nearly three-year slide. He says his recent struggles can mostly be attributed to his putting. He played with a new Scotty Cameron putter Thursday, the fifth one he has used in competition this season. He practiced with it for the first time Tuesday.

“It would be nice to hit some [balls] a little closer, but that’s not probably the biggest issue,” Fowler said. “One of the biggest issues over the last year or two, I’m just not putting anywhere near [as well as] what I’m used to or I know I can. That does a lot with momentum and confidence and freeing you up from the rest of the game, not feeling like you have to necessarily hit it super close to make birdies.

“I’ve been driving it really well, and so I think kind of the last thing is seeing a few putts go in is I think something that’s really going to free up the rest of the game to kind of start cruising again.”

“[The ball] kind of goes all over the place,” Fowler said. “I would say a lot of it is read-based, but at that point when you’re not trusting your reads, speed’s a little off, so there’s plenty of variables in putting. If you’re not starting it online, it doesn’t matter if you have the right read or speed.”

Fowler finally had the ball rolling pretty well Thursday. He made 55 feet of putts. His eagle on the par-5 16th moved him to 5 under. His opening round at least gives him a chance to move beyond this weekend in the playoffs.

“Obviously I need to play well to just make it to next week, but it would be a big bonus if we can do that and move on,” Fowler said. “Kind of leave it all out there, see what happens, but definitely happy with the start, especially with not making a whole lot.”