Rafiki, the Pope and a multi-millionaire: The pros’ Halloween costumes | Rogers Report 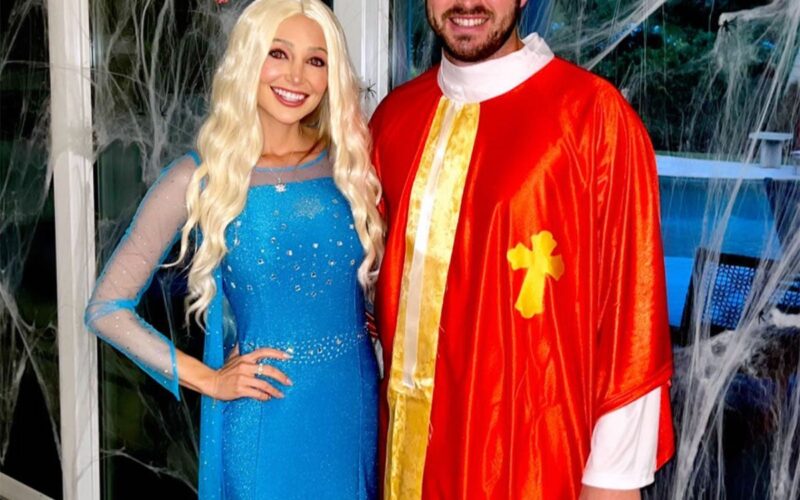 From Tiger to Jon Rahm and a Nelly Korda fan, here’s what your favorite golfers dressed up as for Halloween this year.

From Tiger to Jon Rahm and a Nelly Korda fan, here’s what your favorite golfers dressed up as for Halloween this year.

Hello, friends, and welcome to a very special edition of the Rogers Report. This week we are celebrating the following, in a very particular order: Taylor Swift’s new album, Halloween and the Rogers Report’s new logo (see above).

In the company-wide survey I took, Taylor Swift’s Anti-Hero proved to be GOLF.com’s favorite song on the Midnights album. Bejeweled was a close second. Thank you to my three coworkers who voted (myself included). Anyways, over to Halloween. The pros and their families had a strong showing this year, and, as always, the Donald family set the gold standard in terms of costumes. And thanks to TaylorMade, we got to see a handful of pros dressed up.

Here’s a picture of my little sister dressed up as Winifred Sanderson from Hocus Pocus. Spot on, if I do say so myself.

OK, back to the pros.

The European Ryder Cup captain and his family absolutely crushed their costumes this year. From left to right we’ve got Luke as a Roman emperor, Gigi as spaghetti, Ellie as gelato, Sophie as a gladiator, Diane as the colosseum and their pup, Archie, as the Pope. We might as well call the Ryder Cup now, folks, because the Donald family just won.

Up next we have an extremely unlikely couple. No, no, not Nikki Guidish and Patrick Cantlay. Frozen‘s Elsa and the Pope! We’re only two golf families in and we’ve already got a pair of Popes. That’s gotta be some sort of record.

Next up we have one of my absolute favorites. Jon Rahm went as Rafiki and his sons, Kepa and Eneko, went as Simba. Shout out to whatever company is making a Rafiki costume that fits a 6-foot-2 professional athlete.

The scenery really adds something extra to these photos, as well.

The Finau family is old-reliable when it comes to holiday content. That’s not to say I take it for granted. I look forward to their Christmas posts, their summer vacation posts and even the pictures from their youngest’s first birthday party were second to none. So it is absolutely no surprise that we were provided with a handful of photos and even a few costume changes.

I have to say, I was pleasantly surprised by the fact that the Na family went all-out for Halloween.

I’m not exactly sure what’s going on here, but as someone who did not get a costume this year, I admire the Walker’s dedication.

OK, folks. Popes and Inflatable Alien costumes are officially the most popular among professional golf families. It doesn’t look like Dustin Johnson dressed up as anything other than a man who made $35 million this year, but I’m loving the dragon costume that either one of his sons or a trick-or-treater is rocking in their driveway.

The LPGA pros showed up in full force for the holiday, as well. Consider this my official request for the pros to play in costume next year.

LIV Golf shared some costumes of Halloweens past, and they are SO good. The old photo of Phil Mickelson makes me wonder if he dressed up for Halloween this year.

And if you somehow haven’t seen it, check out the hilarious videos that TaylorMade put out. At this rate, I’m wondering if there’s anything TaylorMade couldn’t get their athletes to do.

If TaylorMade did all this for Halloween, I have a feeling their holiday content is going to be top-notch this year.

Unfortunately, it didn’t seem like many trick-or-treaters stopped at the Sims-Koepka household on Monday night. Oh well, more candy for the adults!

While the Donalds may have won Halloween in the professional golf family category, Beau Ellington takes home the gold in the junior golfer category. From the hair to the sponsors to the bag, she perfectly executed our Nelly Korda cover.

And although it’s not from this year, I’d be remiss not to share this throwback of a young fan who dressed as Tiger and then ran into him on Halloween. That might be as good as it gets.