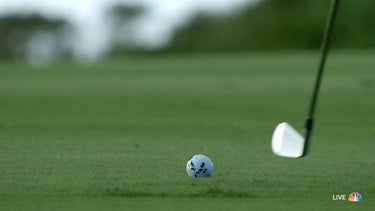 Players were forced to deal with countless mud balls during the third round of the Hero World Challenge. Not many were happy after the round.

Players were forced to deal with countless mud balls during the third round of the Hero World Challenge. Not many were happy after the round.

Collin Morikawa spent parts of the round helping Tom Kim identify his ball in the middle of the fairway.

And Scottie Scheffler was hitting 200-yard shots less than 10 feet off the ground to keep them inside the friendly confines of Albany’s fairways … or at least close.

Why were 20 of the best golfers in the world uncharacteristically bad shots and complaining about it Saturday at the Hero World Challenge? Mud.

For the third round, PGA Tour officials believed Albany, which had been soaked by rain earlier in the week, was dry enough to allow players to play the ball down and unable to utilize preferred lies as they had the first two rounds of the events.

After a round plagued by mud balls and bizarre-looking shots, some players did not agree.

“Absolutely shocked, yeah,” Kisner said of the Tour’s decision. “No. 4, [I] had a 4-iron in with mud all on the left side with wind off the left and lost the ball left of the green. Pretty hard to aim it in the middle of that. But the leaders aren’t having any problems, so wasn’t too hard for everyone.”

While petty, Kisner did have a point. Scoring on Saturday was nearly two strokes lower than the first two days, which were plagued by blustery winds gusting up to 30 mph.

Second-round leader Viktor Hovland surged even further ahead Saturday, making 10 birdies on his way to a 64 and a three-shot lead over Scheffler.

“It will be hard to complain about mud wrecking a score when you’ve got a guy making 10 birdies,” NBC Analyst Paul Azinger said before signing off. “Guys that are complaining need to check their attitude at the door.”

But even though scoring was better, Hovland and the other leaders still dealt with their fair share of unpredictable lies thanks to mud on the golf ball.

One of Hovland’s two bogeys on the day came on 18 when his tee ball ended up covered in dirt. He pushed his iron shot short and right of the green and still had to deal with the mud on the chip shot, which he left short of the hole.

But that paled in comparison to what his playing partner, Cam Young, dealt with on the 11th hole.

Young’s 4-iron approach on the par-5 sailed some 50 yards right of his target into a bush, resulting in a bogey. At that point the 25-year-old leading by two strokes.

He never really recovered from that and after making six birdies in the first 10 holes, he played the final eight holes in two over, making another bogey at the par-5 15th.

Neither Hovland or Young had much to say about the conditions. But others like Kisner were more cavalier with their thoughts.

Justin Thomas said he wasn’t sure if he agreed with the Tour’s choice to play the ball down, but in a limited-field event, “it is what it is.” He did offer a potential solution to days like Saturday where the decision to play it up or down might be up for debate.

“I was joking with Tiger [Woods] and I said to Billy [Horschel] today, too, like I wish we could play it up after our tee shot and down around the green because I think playing it up is a huge advantage around the greens,” Thomas said after shooting 66 to sit in third place with Young at 8 under. “You’re able to just put it on a tee. The lies that you have, the shots that you have to create just don’t take as much creativity and skill I think, to be perfectly honest, as when you have to play the ball down and you have to obviously play it where it is.”

“I think with the Rules of Golf there might be something we can figure it out whether it’s, I don’t know, a lift, clean and drop or draw a line in the fairway where it’s like hey, when you’re inside this line up to the green, you don’t clean your ball,” he said. “That’s just something we’ve done at home, Jordan and I and everybody’s done it in the past and it works well. I don’t know what works exactly in a tournament setting.”

Collin Morikawa took advantage of that ability Friday on No. 11. A day later, it was back to reality for Morikawa, who dealt with not only seeing Kim’s ball covered in mud on “three or four holes” but a fair share of his own mud balls, like the one below on No. 3.

“We easily could have played it up and played preferred lies again today because I think one of the fairways we were walking, there was still water,” Morikawa said. “Worst [mud ball] I got was on 4.”

Morikawa then said a memory of hitting into trouble on the same hole a year ago crept into his mind. He said he missed it left into the brush then and presented with a ball with mud on the right side meant it was going to go left again.

“Problem is the wind’s going right, so now I have no clue where to aim and I ended up aiming straight in the bush and thankfully it kind of went with the wind at the end,” he said. “Not a good feeling.”

Scheffler also said there was a lot of guesswork involved in hitting shots. A reporter asked if it was “exciting” to step up to a shot, not knowing where it might end up.

“Exciting’s definitely not the right word for it,” he said after shooting 66 to hold second alone. “It’s infuriating, yeah. It’s frustrating you spend so much time trying to learn how to control your golf ball and then you’re in the middle of the fairway and you have no idea where the ball’s going to go.