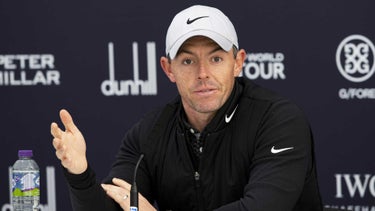 Rory McIlroy has gained a reputation as one of the best interviews on Tour.

His answers to questions have always been refreshingly honest and thoughtful, and in recent months, McIlroy has become the Tour’s de facto spokesman, defending its position against the rival LIV Golf tour.

Ahead of this week’s CJ Cup at Congaree, in South Carolina, McIlroy, the defending champion, has been back doing his thing, waxing about the state of his game and his chance to regain the top spot in the world ranking.

But then, on Wednesday, the unexpected: President Cup hero Tom Kim, who was in the press room, took the mic and posed a question of his own.

“Rory, I have a question for you,” he said. “What’s it like having so much success as a young player? Coming out and many years on tour, how do you manage all that?”

A player asking another player a question in a press conference is rare enough, but there’s enough backstory here to make it doubly charming.

Kim, as fans of the game well know, is one of golf’s ascendant stars. He made a name for himself with a rousing performance for the International team at the Presidents Cup in September, and just notched his second PGA Tour victory in two months with a win at the Shriners Children’s Open in Las Vegas. Kim’s first win at the Wyndham Championship was notable because he started the tournament with a quadruple-bogey on the first hole.

At this year’s Tour Championship, Rory McIlroy was four over par through his first two holes. He said he thought of Kim’s brutal start at the Wyndham, and managed to turn things around. McIlroy ultimately won the tournament by a shot at 21 under par.

So when Kim posed his question to McIlroy on Wednesday, it felt like an earnest inquiry. Kim is only 20 years old after all, and now ranked 15th in the world.

“I didn’t have as much success as you’re having at such a young age,” McIlroy began. “I think the biggest thing that I realized is managing your time. You’re going to be pulled in so many different directions. You’ve got one, two, three, four, I can see five sponsors on you at this point, right? So it’s just trying to manage your time to realize what got you to this position, right? Why are you a two-time PGA Tour winner, why are you such a great player? And it’s the time that you put into it and it’s the practice, it’s not losing sight of that.

“I was speaking here just before you came in that I’ve almost found it easier to get to No. 1 in the world than staying there,” McIlroy continued. “I think staying there is harder. I think you’ve got a bulls-eye on your back, you’ve got to work harder, everyone’s coming after you. That’s the one thing I would say is just managing your time and not forgetting why you’re in this position and why you’re so lucky to get to play with me the next two days.”

No, McIlroy wasn’t suddenly displaying some serious ego. He added:

“That was a joke that went over everyone’s head.”

It was a wholesome moment, and set up what should be an entertaining grouping for the next two days.

McIroy and Kim will play alongside Rickie Fowler at 10:21 a.m. ET in Thursday’s first round at Congaree.